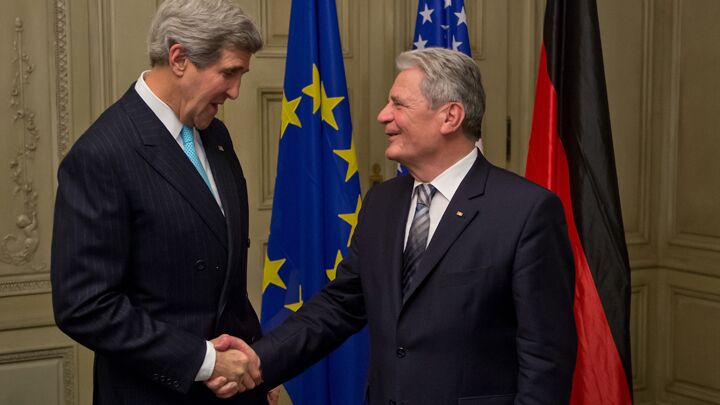 America’s global retreat is pushing Germany to radically change its role in the world.

January 2014 was one of the most pivotal months in Germany’s post-war history. The nation’s top leaders lined up to proclaim a dramatic shift in foreign policy. Germany’s post-World War ii period of restraint is over. Germany’s history, proclaimed its president, should no longer be an excuse for German inaction. The German military should act like any other: It should be prepared to get involved in foreign conflicts just like France, Britain and America.

The Trumpet has covered the danger of this shift here and here. But why is it happening right now?

The answer is obvious, except apparently to America’s top diplomat: America is in retreat, pushing Europe and Germany to take its place.

America constantly urges Europe and Germany to do more. At the Munich Security Conference last year, U.S. Vice President Joe Biden urged Europe to resist “the ever present temptation to back away from commitments on defense spending.”

“Europe is the cornerstone of our engagement with the rest of the world,” Biden said. Almost every time nato gets together, America pushes Europe for more military commitments. For example, Secretary-General Anders Fogh Rasmussen said, “I believe that European nations can, and should, do more, to match America’s commitment,” at a speech in Brussels in September.

American President Barack Obama has even called specifically for Germany to step up. In 2011, he awarded German Chancellor Angela Merkel the Presidential Medal of Freedom. “Don’t hide behind your history, said the president. Act in accordance with your importance,” reported the German weekly Die Zeit at the time. “The world today does not fear a strong Germany,” Der Tagesspiegel recorded Obama as saying. “It is, rather, disappointed when Germany is too reserved.”

Europe and Germany are getting the message. For around a year now, leaders and think tanks in Europe have focused on the decline of America as one of the biggest global changes that the EU has to adapt to.

In October, EU Foreign Minister Catherine Ashton said that America’s “renewed emphasis” on Asia “means that Europe must assume greater responsibility for its own security and that of its neighborhood.”

Around the same time, the German Marshall Fund of the United States and the Stiftung Wissenschaft und Politik (swp), a think tank that advises the German parliament on military and security matters, produced a paper titled “New Power New Responsibility—elements of a German foreign and security policy for a changing world.” In the introduction, they note that “the United States—conscious of its reduced resources—is sending clear signals that their engagement in the world will be more selective in future, and that its expectations of partners will be correspondingly higher. This means that Europe, and Germany in particular, will have to take on a lot more tasks and responsibilities.”

These are just two examples. They’re not rare. Almost every time a European think tank or leader talks about the future of European security it is always predicated on this fact—the U.S. is reducing its influence in the world, and it wants Europe to pick up the slack.

As Germany’s leaders unveiled their new vision for Germany at the Munich Security Conference this year, they also referenced America’s role in pushing them to act. “At this very moment, the world’s only superpower is reconsidering the scale and form of its global engagement,” German President Joachim Gauck noted. This was the first of two reasons he listed that meant Germany can no longer “simply carry on as before”—the second reason being Europe’s “navel gazing.” In other words, America’s retreat from the world is the number one reason why Germany needs become more militaristic, according to Mr. Gauck.

What was America’s response to this? The U.S. wants to make sure Germany follows through on its promised changes. “Leading, I say respectfully, does not mean meeting in Munich for good discussions,” U.S. Secretary of State John Kerry said. “It means committing resources even in a difficult time.”

Yet, quite bizarrely, when asked if the U.S. was withdrawing from the world, Kerry said that the idea “is flat wrong and it is belied by every single fact of what we are doing everywhere in the world.”

“I can’t think of a place in the world that we are retreating, not one,” he said.

Yet it is this retreat that has forced Germany to change its strategy. America, in its weakness, actually wants Germany to forget about its history and become a military power once more. America built up Germany and stopped its Nazi hunting in order to create an enemy for Russia. Now it’s taking the process even further—pushing a German-led Europe to be its replacement, while it bows out of global affairs.

How will this end? We answered exactly that question in the January issue of the Trumpet magazine, when we looked at the world without America. For a thorough examination of what the world will look like with Europe taking America’s place, read “The World’s Next Superpower.”