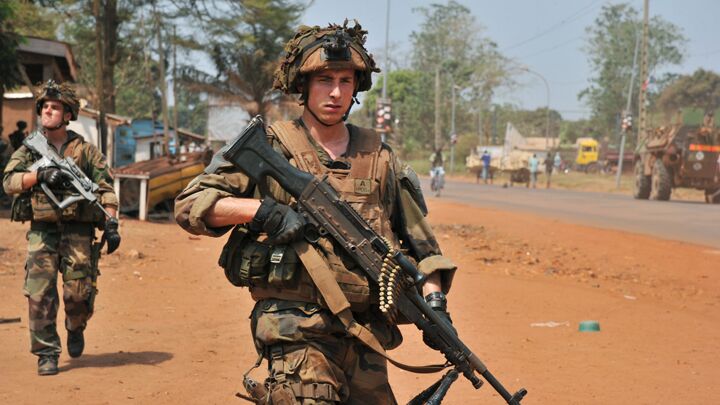 How Germany’s African policy is winning Berlin power in Europe

On January 28, the United Nations Security Council gave its approval for the European Union to deploy troops in the Central African Republic. Around 500 are expected to go, though EU leaders have agreed to send up to 1,000. These soldiers will join the 1,600 French and 5,000 African Union soldiers already present.

It’s not clear where these troops are coming from, but one nation has already said it won’t be sending any: Germany.

Why not? Regular Trumpet readers will be familiar with the situation in North Africa. As authoritarian regimes that once held back radical Islam fall, extremists are spreading west, across North Africa. It’s a danger that Europe, especially Germany, is well aware of, which is why France led an intervention in Mali last year.

Islamic rebels toppled the Central African Republic’s (car) government last year. Since then, disorder and violence have spread across the nation as religious and ethnic differences turn violent.

There is a clear danger here. The car borders Sudan, Iran’s biggest ally in the region. A chaotic car could radically expand the reach of Iranian-led radical Islam, giving easy access to the Gulf of Guinea and the jungles of the Congo.

So why is Germany sitting it out? It’s all part of another, much less intense rivalry, this time with a near neighbor: France.

Germany has already used the car to score a major victory over the French. Last year, there was no bigger rival to Germany’s leadership of Europe than French President François Hollande. As he began his presidency, he promised to fight against German austerity and to pioneer an alternative. Some believed he would lead all of southern Europe in a revolt. But that never happened.

Soon after coming into office, Hollande launched his offensive in Mali. Germany backed him. Radical Islam was an urgent threat: The situation was too serious to use as a pawn in a game of Europolitics with France.

Then Paris went into the car, alone, without taking the matter to the EU.

France’s economy was already weak; it was probable that the French would someday need a bailout themselves. With the government budget stretched close to its limit, the nation had to bear the burden of two extra substantial military deployments.

So, this past December, Hollande turned to the EU for support, desperate for money just as much for as EU troops. German Chancellor Angela Merkel said no. France could not launch a military mission and then turn around and ask for a check, she explained.

Then came France’s historic capitulation on January 14. The French president told the world that Germany’s austere leadership was actually what Europe needed after all. Thus, even if Hollande fails to follow through on the economic policies he announced at that press conference, he has relinquished his role as the anti-German champion.

Hollande then spent most of the rest of the conference discussing German-France military relations—leading the Trumpet to note, “The focus on defense cooperation suggests that Germany may have agreed to allow the EU to pay for part of France’s military mission in the Central African Republic” in exchange for France shifting its stance.

We didn’t have to wait long to find out. On January 20—less than a week later—EU foreign ministers announced they would send up to 1,000 soldiers. Merkel had reversed her veto, giving France the support it wanted.

Germany’s initial refusal to support France played a major role—perhaps even the major role—in forcing France to capitulate on European economic leadership. Hollande has now joined a new Franco-German partnership. Except this is no longer an alignment of approximate equals. France, with its near crippled economy, is very much the junior partner.

Even though Germany has allowed the EU to support France’s efforts in car, it is still refusing to provide direct German help. It has offered logistical support, but currently the support it is offering is so useless that no one is likely to take up the offer.

Here Germany’s strategy is part of an attempt to replace France as the leading European power in north and central Africa.

Historically France has been the dominant colonial power in the area. Even now, many of the countries speak French as their main language. France maintains military bases in many of its former colonies and even gets very involved in their governments—even to the point of booting out leaders it doesn’t like and propping up those it does.

But even with all those advantages, France is losing its economic connection to the region. In 1960, around 17 percent of sub-Saharan Africa’s trade was with France—second only to the UK’s. As recently as the year 2000, France was the main exporter to sub-Saharan Africa. Now it is in fifth place, behind China, America, India and Germany.

Germany’s rise at France’s expense is particularly noteworthy. It is understandable that France would lose ground compared to China—a rising superpower aggressively expanding its influence in the region—or America. These are all major powers located far away from France and with very different economies. But Germany is right next door. The two nations have the same currency and similar transport costs. Their economies broadly follow the same cycles. Both nations are increasing the amount they export to Africa, even while their total share of exports decrease. But why is Germany able to increase that trade with Africa faster than France despite all of France’s advantages?

Germany is not content to let France manage North Africa on Europe’s behalf. It has its own, separate interests in the region. And it is worried that France will try to use its military operations to regain the influence it has been losing to Germany, among others.

So instead of sending troops to car, Germany has offered to increase its presence in Mali—freeing up France to send more to the car. Rather than being France’s lackey, Germany is concentrating its limited resources in one place, so it can maximize its influence in Mali. Remember, Germany’s army was built to defend the Fatherland from a Soviet invasion, not to fight missions abroad. It is in the process of reform, but has nearly 5,000 soldiers stationed abroad—mainly in Afghanistan, but also with sizable deployments in the Balkans, the Horn of Africa, Turkey and Lebanon. It can’t easily send thousands of troops into different African countries. It must be choosy about where it gets involved.

That limitation could soon change. Over recent weeks, key German leaders have been proclaiming a revolution in German foreign policy, one that would end the nation’s traditional reluctance to deploy troops.

But for now, Germany has about 100 soldiers in Mali on a training mission that expires this month, with parliamentary approval for up 180. The new German defense minister, Ursula von der Leyen, wants to extend the mission and expand the number of soldiers to 250. She is also making the case for Germany doing more in the world, both to look after its own interests, and because, “From a purely humanitarian perspective, we can’t look away when murder and rape are taking place daily.”

Germany is already doing well in Mali. When Malian President Ibrahim Boubacar Keïta traveled to Europe, it was Germany that he hailed as Mali’s “most important partner” and, on “the international level,” its “main partner country.” That statement is a bit odd, considering that France was the nation that put him in power.

But German ambitions stretch further. Writing for the Stiftung Wissenschaft und Politik, a think tank that advises the German parliament and government on foreign policy, research group leader for the Middle East and Africa Dr. Annette Weber wrote, “For the long-term development” of the car, “France is the wrong partner.” France’s knowledge and history of the country makes it the most suitable leader of a quick military intervention, she concluded. But “In the long-term stabilization and support of political actors … France should hold back just because of its past.”

Her message matches German actions. Germany will allow and even support France as it confronts radical Islam in Africa. But it won’t allow France to use these missions to rebuild its influence in its former colonies.

Instead, just as France’s economic weakness has brought it under German leadership within Europe, watch for these same weaknesses to enable Germany to take the lead in North Africa.