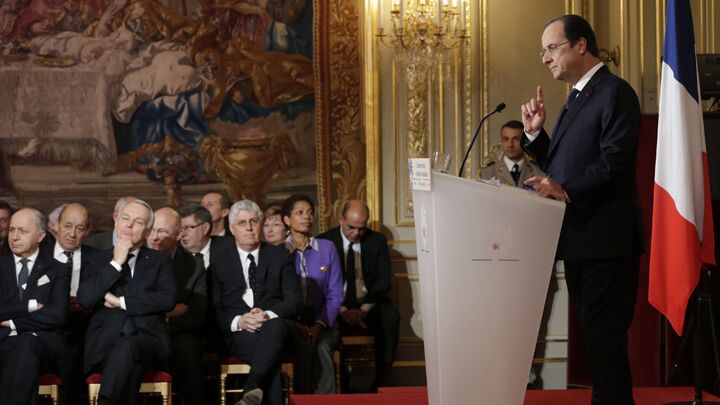 It’s hard to write on France without mentioning the most sensational story of the day—President François Hollande alleged affair with a young actress in an apartment that has links to the mafia. But there’s another more important story right now. That’s not to say that the president’s infidelity isn’t important—a leader’s character matters. But the scandal is pushing an even bigger story off the front pages.

France is surrendering leadership of the EU to Germany.

Germany has been leading the EU for some time—often under the guise of a Franco-German agreement. Former French President Nicolas Sarkozy agreed with German Chancellor Angela Merkel so much that the two became known as “Merkozy.”

But when Mr. Hollande was elected, he threatened war—albeit the more peaceful kind, fought across the conference rooms of Europe instead of its battlefields. For a while, it looked like he would lead Southern Europe in an uprising against Germany’s dominance. Could the combined might of France, Italy and Spain force Germany to back down?

We’re not going to find out. While Mr. Hollande broke away from Sarkozy’s close relationship with Merkel, he never really fought Germany in earnest. The Southern European confederation didn’t materialize. And at a press conference on Tuesday, Hollande officially gave up the fight, promising to return France to Germany’s side.

The bulk of the press conference was devoted to the economy—where Germany has exerted the most leadership in Europe. Hollande used to be Europe’s anti-austerity champion, but now he has returned to the German way of doing things—promising to cut taxes and spending.

There’s a valid debate on whether this will work. These are the measures that France needs, but whether they are enough and whether Mr. Hollande will follow through with them remains to be seen. There is also an argument that now is not the time for these reforms—they will cause short-term pain before the long-term benefits kick in. With France already battling high unemployment, struggling with social unrest and facing a large number of disgruntled immigrants, painful reforms could lead to massive street violence.

But the most important part of this announcement means that Hollande will no longer be championing an alternative way of doing things in Europe. Just a few months ago, Germany was telling Europe to cut spending, while Hollande said, No, you don’t have to. Now even he has taken the German medicine. Even if he fails to implement the reforms, he’s still given up his opposition to Germany.

Then, Hollande devoted the rest of his speech to calling for a new, even closer partnership with Germany. He said that the two nations would harmonize tax rules. He said they would work together on energy and electricity—creating a massive energy company along the same lines as Airbus. But most importantly, he said they would cooperate on defense.

In October, Hollande dissolved France’s last French-only regiment based in Germany—part of the symbolic Franco-German Brigade. It was a cost-saving exercise but it also sent a message: Military cooperation with Germany is a waste of time and money. So far, the Franco-German brigade has accomplished almost nothing. Some wondered if Hollande would soon break up the whole thing.

On Tuesday, he made a complete U-turn. This time he praised the brigade, but said that it wasn’t enough. “We must do more than a brigade,” he said. “We must show a common responsibility for peace and security in the world.” Hollande’s gone from wanting less military cooperation with Germany to wanting more.

French and German ministers will meet to discuss all these issues in February.

Mr. Hollande sees cooperation between Germany and France in these areas as a template for all of Europe. He wants decisions for Europe to once again be hashed out between France and Germany first. We’re returning to the days of Franco-German-led Europe.

At one time this was an equal partnership—perhaps with France even holding the upper hand. But not anymore. France’s economy is weak. Mr. Hollande, personally, is in a position of weakness—his approval ratings keep sinking lower and lower, although they have slightly improved after revelations of his affair.

The whole world is now talking about France’s problems. Newsweek published an article a couple of weeks ago titled “The Fall of France.” The French were outraged. Then Britain’s City A.M. published an article called “France’s failed socialist experiment is turning into a tragedy.” This time, France’s embassy in London escalated it into a diplomatic incident, bashing Britain in a response on its website.

While some of the criticism may be exaggerated, France’s economy is certainly suffering. Government spending accounts for 57 percent of the nation’s economy—the second highest level in Europe. Regulation is stifling growth. London is now the sixth largest French city in the world as highly paid French workers escape France’s massive tax burden.

Even those most optimistic about France’s economy would have to agree that the nation cannot stand on equal footing with Germany. France has gone from being a mild opponent of Germany to its junior partner.

Of course, France may get some concessions. The focus on defense cooperation suggests that Germany may have agreed to allow the EU to pay for part of France’s military mission in the Central African Republic. And France will continue to get concessions.

But Germany is in the driving seat, and France isn’t going to argue about it anymore. As the Telegraph’s Ambrose Evans-Pritchard put it, “Mr. Hollande has thrown in his lot with Berlin irreversibly.”

Germany is far from all-powerful in Europe. But without any major opposition, watch for this power to grow as the euro is hit by more and more economic crises. As the Trumpet has warned for years, it is Germany, along with the Catholic Church, that will lead Europe. For more information on this, read our article “Germany Is Conquering Europe!”