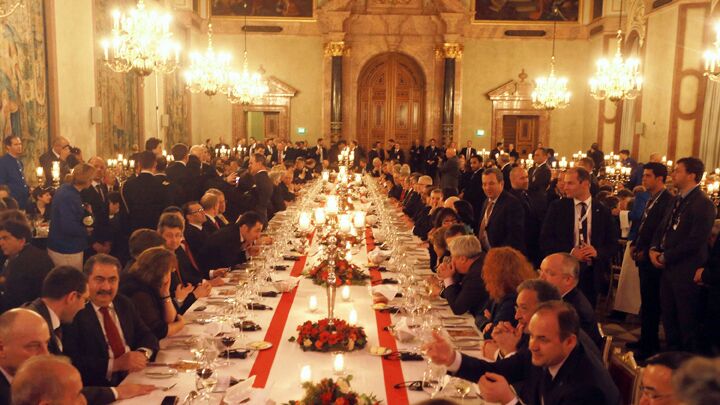 The Munich Security Conference (msc), hosted in Germany, is a yearly nexus for global geo-strategists. Organizers promote the event as “an independent forum dedicated to promoting peaceful conflict resolution and international cooperation and dialogue in dealing with today’s and future security challenges.” Why should you intensely watch this international event being held January 27 through February 2?

This year marks the 50th anniversary of the conference. Its draft agenda features first-day discussion on various subjects such as cyberspace security, defense, Mideast peace process and what the msc calls the “Syrian Catastrophe.” Day two is set to focus on transatlantic relations, U.S. and Asia, climate change and digital intelligence. The final day of the event will center upon dialogue between Serbia and Kosovo, the Middle East and wrap up by focusing on Iran.

The Trumpet has reported on the msc over the years, shining the clear light of Bible prophecy through the murky darkness of politics among the Continent’s nations to reinforce the end-time revelation of the final resurrection and destructive work of the Holy Roman Empire, the modern-day European Union.

Key international statesman and scholar Karl-Theodore zu Guttenberg was featured at the msc in 2011, and most recently at its two-day core meeting in November held in Washington, D.C., amid an atmosphere of fallout from the nsaspying scandal. Our past coverage drew attention to his prior work in German Chancellor Angela Merkel’s cabinet along with his statements to conference attendees. In the April 2011 Trumpet, we addressed Guttenberg’s opening speech at the 2011 conference:

“Security has a global dimension,” he said. He linked that global dimension with Germany’s recent moves to “launch the most fundamental changes to our military force since the founding of the Bundeswehr,” redesigning the German military to become “smaller, more capable, more efficient and more effective.” He noted that Germany is “joined in this effort by our partners in the [Atlantic] alliance.” These changes, Guttenberg indicated, were to “strike a balance between means and mission” with the overall aim of answering the question, what do we want to achieve politically with the realignment of the Bundeswehr? …[Herbert W. Armstrong] told us Germany had learned that to seek to take over Europe a third time by warfare was counterproductive. He clearly declared that it would set up an economic empire first, then suddenly militarize it at the appropriate time. He told us that it would then turn our own weapons upon us!That is what the integration of the German, EU and nato military structure being touted by nato and Germany is all about!Now that Germany is so far advanced toward economic and hence political control of Europe, the time is fast approaching for it to accelerate military control.The Munich Security Conference exposed the German plan for what it is. The competitiveness pact is the instrument by which Europe’s governance will be centralized in Berlin. The concept of “network security” highlighted by Guttenberg is the strategy by which nato and EU military power will be progressively merged to enforce that government.

Keep a close eye on the conference for its discussion and outcome are to accelerate the congealing of what Bible prophecy labels a military devastating “beastly” power. Christ Himself exhorted, “Watch ye therefore, and pray always, that ye may be accounted worthy to escape all these things that shall come to pass, and to stand before the Son of man” (Luke 21:36).