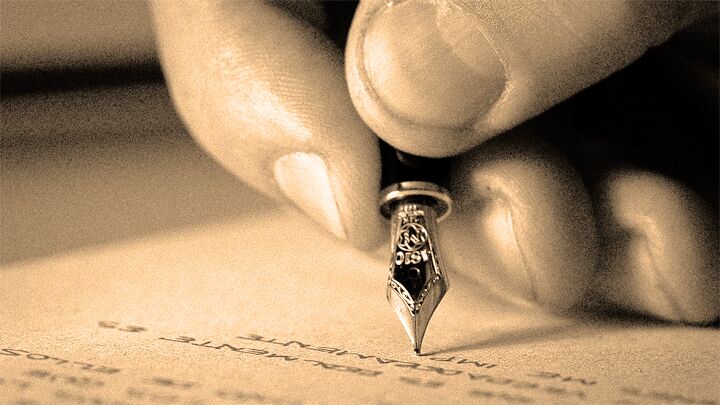 That was 1854. What would the man think of the life-frittering details that consume us in the Twitter age?

Contemplating this, I recently picked up Ferrar Fenton’s translation of the Bible in my study. A few months back a friend gave me a copy. But it wasn’t until that recent morning that I realized I was in possession of something quite awesome and inspiring.

At the beginning of the massive volume is “A note to my inquiring friends” from the translator. It is Mr. Fenton’s explanation of why he—a British businessman in the 19th century—undertook the mammoth project of translating the entirety of the Holy Scriptures.

It is a testament to the manly sense of duty, determination, sacrifice, perseverance, magnanimity and big-mindedness behind this book. It truly stirred my admiration.

Fenton paraphrases a Prof. Karl Behr of Munich, who taught thus: “That the best-established doctrine of Historical Philosophy was, that all the power, prosperity and mental energy of a race or nation sprang from and lived by its religion; that when its religion ceased to be its faith—that is, its energizing principle—the intellect, power, vigor and prosperity of that race or nation died away in proportion, and ultimately perished, both mentally and physically.”

That is a breathtaking statement, piercing in its truth, painful for its prophetic relevance in this aggressively secularist age.

Fenton then expresses this remarkable conviction: “[T]he position the British race has won in the world is founded upon the … religion, which takes as its origin the Bible, and therefore I am convinced that with the decay of faith in the Scriptures our national vigor and prosperity, as a race, will waste away; not only in the British Isles, but, as with all races, in every state or colony sprung from them, no matter upon what part of the Earth’s surface they are situated. Consequently, I will try at least to avert, or retard, so great a catastrophe and calamity to the whole of mankind. I have decided, God helping me, to execute the work you see I am doing” (emphasis added throughout).

In translating the Bible into modern English, he explains, “My object is to try and save the British race from decay and dissolution by restoring to it the vital element of faith in revelation, for unless its faith is revived our doom is certain.”

I find several things about this astounding. That this man recognized with such assurance the centrality of Bible-based faith to national health and prosperity, even survival. That he particularly believed this to be true of Britain and the outlying elements of its empire, and of America. That he knew the decline of these nations would constitute a catastrophe and calamity to the world.

Again, these are prophetic truths that resonate with relevance today. In 1910, when Fenton penned this introduction to his Bible translation, “nobody cares a halfpenny for the Bible,” he wrote, quoting the words of a critic of his work. A century later, that indifference has turned to antipathy. We live in a Britain and an America that are increasingly making adherence to biblical truth a crime punishable by the state.

This all made Fenton’s words stir me as I read them. But there is something more. I am also deeply impressed that this man possessed such determined focus to try to single-handedly prevent, or at least delay, this catastrophe, using the means he believed God inspired him to. Fenton perceived a need for a modern translation of the Bible, and recognized that it was a task nobody else would undertake. So what did he do?

And then he didn’t stop until he finished.

“I saw the need also, not only as a student, but from intercourse with all classes of my countrymen,” he wrote, “and God inspired me with courage to undertake it, and with inborn perseverance during a period of 50 years to carry it through, by devoting every leisure moment of a busy commercial life to the preparation for, and execution of, that one object.”

It was in 1853—at the same time that Thoreau was traversing the woods of Walden Pond—that Fenton started this mammoth undertaking. He finished in 1903 at the age of 71.

It’s astonishing what singular devotion to an important task can yield. How critical it is that we prune out those life-frittering details—and make the very most of the brief time we possess. For today, too, there is a great work to be done, in the shadow of looming catastrophe and calamity. It demands courage, perseverance, and devotion to that one object. Simplicity, simplicity, simplicity!