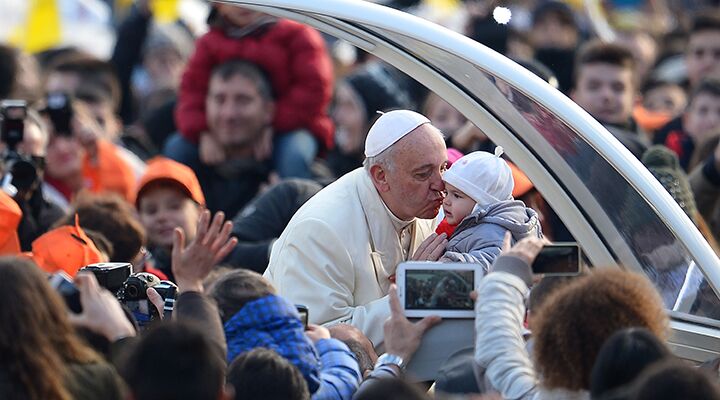 Some Bible prophecy watchers have been on the lookout for a firebrand pope. They’ve been watching for a real zealot capable of spearheading a Europe-wide revival of uncompromising, conservative Catholicism.

Pope Francis seems to be a different kind of pope.

During his first year in office, he reached out to all religions, meeting with leaders from the Orthodox Church, Anglicans, Lutherans, Methodists, and also Jews, Muslims, Buddhists and Hindus. He even extended the olive branch toward atheists and agnostics, saying, “God forgives those who do not believe and do not seek faith.”

He made headlines worldwide after he appeared to cede ground on a defining battlefield of our time. “Who am I to judge them?” he said about homosexuals. “They’re our brothers.”

These are issues that previous popes, especially Benedict xvi, had generally taken firm, conservative stances on. By contrast, Francis seems gentle, liberal and inclusive. His attitude may make him seem unlikely to become the pope who comes to hold sway over Europe’s politics or to rally Europeans to the Catholic fold. But this view may not factor in the understanding that Europe—in terms of religion—is not the continent it was 50, 20 or even 10 years ago.

The shift has been similar in Germany. In 1950, over 96 percent of Germans identified as Christians. Today it’s less than 60 percent, and only 1.2 percent attend church regularly. This trend is consistent throughout Europe.

Why the sharp decline? Mostly because of the rise of secularism. Modern Europeans are rejecting absolutes and religion at accelerating rates.

Even as recently as 2005, only 14 percent of French people described themselves as “convinced atheists.” By 2012, that number had jumped to 29 percent. During that same time, Germany’s “convinced atheists” jumped from 10 to 15 percent, and the Czech Republic’s went from to 20 to 30 percent. Of the world’s top 10 nations by percentage of atheists, seven are now in Europe.

This is a momentous shift. And it’s not just the confirmed atheists. Even of those who still say they are Christian, belief is being significantly watered down. For example, about half of the Catholics in France now say they are not even sure God exists.

It was in the midst of this decline that fiery Benedict took his bow and Francis entered the Vatican from stage left. Benedict is still backstage—perhaps ready to make another appearance, perhaps just whispering some lines—but it is Francis who is rewriting the script, healing the church’s reputation and rebranding it as a bastion of acceptance and an institution whose main concern is for the disenfranchised and poor.

This rebranding campaign has worked wonders in popularizing the church among Europeans. Pope Francis is now the most discussed person on the Internet. Francesco, the Italian version of “Francis,” is suddenly Italy’s most popular name for baby boys. Francis has also won the respect of the media, evidenced most recently by Foreign Policy calling his the most impressive voice in the international arena, and Time naming him Person of the Year for 2013. America’s oldest homosexual rights magazine, the Advocate, even named him the “single most influential person of 2013 on the lives of lgbt people.”

From the time of his election in March 2013 until the end of the year, more than 6.6 million people attended events with Pope Francis at the Vatican—almost triple the number that former Pope Benedict drew in all of 2012. Francis has also spawned a dramatic surge in Catholic Church attendance in Spain, Italy, the UK, France and other nations. In some, the increase has been by as much as 20 percent.

It’s too early to say whether Francis will be the pope who steers the church during the close of this age of man. But it is undeniable that he’s significantly improving the way Europeans view the church. He is now in a prime position to do what Catholic leaders have often done best through history: assimilate the views of the masses into church teaching in order to “convert” those masses and lead them.

Bible prophecy says that, in the end time, the Roman Catholic Church’s leadership will appear to be gentle, sincere and “like a lamb.” In some ways, this description fits Francis better than any pope in recent memory.