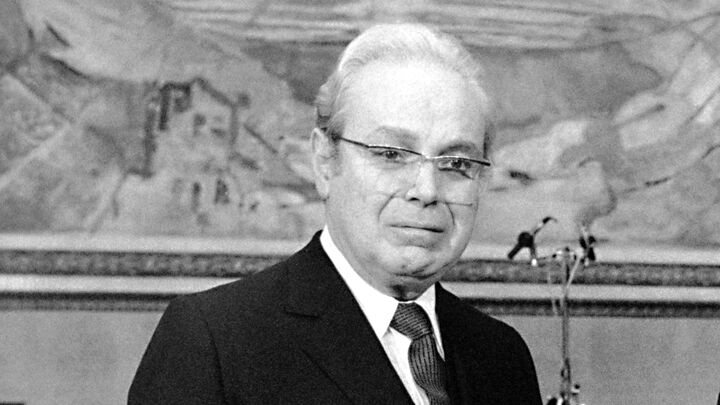 While in San Francisco for the 40th anniversary of the United Nations, Herbert W. Armstrong met with Secretary General Javier Perez de Cuellar.

A native of Peru, Cuellar’s array of experience in politics and diplomacy fitted him for the UN’s top job. He served from 1982 to 1991. During his tenure, he participated in peace talks for the Falklands war between Argentina and Britain, with Lebanon and Israel, and with the ussr and Afghanistan. He also spent time peace seeking during the conflict between Iran and Iraq, then afterward when Iraq seized Kuwait, igniting war in the Gulf.

He made a point of urging UN forces to adhere to humanitarianism when sent into combat zones. The global impacts of environmental destruction, aids, the explosion in international drug trade, and conflict between countries consumed his time. Finally, he oversaw significant adjustments to the UN initiated by the end of the Cold War, the collapse of ussr, the fall of the Berlin Wall and the reunification of Germany.

During the June 1985 UN anniversary event, “Mr. Armstrong, as one of those present at the original conference, was seated at the head table,” reported the July 8 Worldwide News. “At the various functions he met and talked with many of the 131 diplomats representing 99 countries.

“Many UN officials told the pastor general that they had seen him discuss world issues on the World Tomorrow program. This shows the importance of the stations airing the program in New York, N.Y., international headquarters of the UN.”

It was well known to UN officials that this man dubbed “internationally recognized ambassador for peace” had reported on their founding for the World Tomorrow broadcast and Plain Truth magazine. Forty years later, he instructed staff to cover the event in detail and flew his television crew up from their Pasadena studios to capture the sights and sounds.

On the morning of June 26, official ceremonies began at the very location of the signed charter, Herbst Theater. One hundred flags, representing the nations that had since joined the UN, were marched down aisles by children. A video presentation was shown recalling the historic signing after the dark days of World War ii.

Thereafter, Mr. Armstrong attended a reception for delegates at the Fairmont Hotel hosted by the mayor of San Francisco. “There Mr. Armstrong met and talked with several UN ambassadors and officials,” at which time “Secretary General Perez de Cuellar personally invited Mr. Armstrong to visit him at the UN headquarters in New York.

“The 50 guests were taken to the Grand Ballroom for a private luncheon. Mr. Armstrong was again seated at the head table, next to the wife of the ambassador from the Soviet Union.

“That evening marked the final event, a black tie dinner in the Fairmont Hotel’s banquet room. The head table guests were taken to a reception as they waited for other guests to be seated.

“Mr. Armstrong later commented on the apologetic tone of the conference, probably so because of the UN’s inability to accomplish its goals” (ibid).

The ensuing months saw a downturn in Mr. Armstrong’s health, culminating with his death the following year on January 16.

When notified of Mr. Armstrong’s death, the UN secretary general sent a personal message of condolence to Pasadena headquarters that was reprinted on the cover of the Feb. 10, 1986, Worldwide News.

“I was greatly saddened to learn of the passing away of Mr. Armstrong. From the time of the San Francisco [Calif.] Conference which he attended as a journalist, Mr. Armstrong took a strong and supporting interest in the United Nations. With his wide ties throughout the world, he pursued the cause of peace and harmony among all peoples. My wife and I indeed recall our meeting with him in San Francisco last June and had looked forward to seeing him subsequently in New York. We would like to express our sincere condolences on this sad occasion.”

The world peace sought by the UN and its secretary general has yet to materialize. However, the message of Jesus Christ’s gospel, which Mr. Armstrong declared to the corners of the globe, was recognized by international peace seekers at their anniversary event (Matthew 24:14). Today, that good news is prophesied again by Gerald Flurry (Revelation 10:11).

During the final year of Mr. Armstrong’s life, he released his final and most auspicious work in the form of Mystery of the Ages. Sadly, the ruinous condition of his time-honored legacy is widely documented public knowledge. As a result of that betrayal, Gerald Flurry led a crusade to the highest courts in an effort to obtain and give at no cost or obligation that final book. This battle to continue this work ended in conquest. We invite you to read its peace-heralding message, and learn about the promised end of man’s inhumanity to man and the unprecedented global serenity that will break out in the soon-coming Kingdom of God.