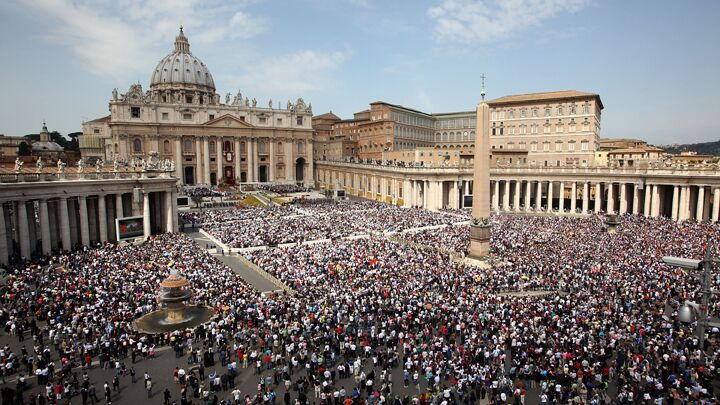 Author, political economist, European expert and ministerial adviser Rodney Atkinson shares his views on the influence of the world’s largest church on Britain.

Over the years, we have quoted and interviewed Rodney Atkinson to obtain his astute insight on British and European affairs.

In February last year, it was announced that Joseph Ratzinger, Pope Benedict xvi, would resign his papal office and take the name Pope Emeritus, remaining in residence inside Vatican City. In March, the college of cardinals chose Jorge Mario Bergoglio to head the church. He chose to be called Pope Francis.

In July, with contributions from William Dorich and Edward Spalton, Mr. Atkinson released his latest book, And Into the Fire. Six months later, amidst an atmosphere of EU enlargement, growing Euroskepticism in his native England, and increasing popularity for Christianity, we asked him to share his views on the power of the Catholic Church in Europe.

In Chapter 8 of your book, you address incursions of the world’s largest church on Europe. In this light, is it realistic that the church can influence your Protestant island nation?

We should not imagine that Britain, the greatest bulwark against Roman Catholicism’s religious, political and constitutional ambitions in Europe, and from which all other Protestants and free churches on the Continent draw much inspiration, is immune from such attacks today. On the contrary. The Vatican is active through its many adherents in the Scottish and Westminster Parliaments in the attempt to have the Act of Settlement repealed—in the name of “equal opportunity” of course. The Church of England has within it those who seek to use ecumenical tolerance as a tool for Anglicans to rejoin the Church of Rome.

Is there past history you could point to which reinforces that?

When Queen Mary began her bloody reign of terror against non-Catholics, for which she went down in history as “Bloody Mary,” she re-instituted the vicious heresy laws. After Catholic Emancipation was passed in 1828, it did not take long for the English Catholic hierarchy to rear its ugly totalitarian head. It was Cardinal Wiseman in 1850 that resorted to Rome’s familiar rhetoric, declaring to his clergy: “It is good for us, reverend brothers, to be here in England …. It is for us to subjugate and subdue, to conquer and to rule, an imperial race. We have to do with a will which reigns throughout the world, as the will of old Rome reigned once; and it is for us to bend or break that will, which nations and kingdoms have found invincible and inflexible. Were heresy conquered in England, it would be conquered throughout the world.”

Is there evidence of present-day influence?

The Vatican has recently, through one of its journals in Britain, The Catholic Herald, succeeded in removing a selected Conservative Party candidate. That candidate, Adrian Hilton, had written a factual book about the Vatican’s role in creating the European Union. Hilton had in fact the support of many leading Catholics, he had been elected by his constituency party and that association stood by him. Conservative Central Office had already dismissed the identical charges laid against Adrian Hilton by The Catholic Herald the previous year. He was eventually removed by the Party at the center by sacking the whole Constituency Association which had democratically selected him! Hilton was much later, and under a new Tory Party leader, restored to the candidates list.The Catholic Herald had written, in its [successful] attempt to remove Adrian Hilton at Slough: “The Catholic Herald does not normally tell its readers how to vote. We will certainly not endorse a political party in the election but we have no hesitation in saying that no Catholic should cast a ballot for Adrian Hilton.”

Was this more about an individual, beliefs or power projection?

Let us be in no doubt that this open and blatant removal of a democratically supported candidate for a British election was done in the name, not of religious belief, but in the name of a foreign power with a specific constitutional agenda. Adrian Hilton was not removed because he told lies or insulted a religion or because he supported abortion or embryo research or homosexual marriage, but because he told unmentionable political truths about an imperial power.

What is the real end game here?

No nation on Earth knows more about the political intrigues of the Vatican than do the British people. The United Kingdom, with its worldwide interests and influence, would be the greatest prize for the Vatican. That is why for over 400 years hardly a single attempt to conquer Britain was not supported and blessed by the Church of Rome—even if that meant, as it did during the Second World War, substantial and open support for Nazism and Fascism.

Mr. Atkinson’s book is available online via Amazon and the iBooks store.

Bible prophecies reveal a future 10-nation European combine, of which Britain will not take part, that will be led by the Catholic Church. The returning Jesus Christ will destroy for all time this seventh and final end-time resurrection of the medieval Holy Roman Empire, and usher in a utopian World Tomorrow governed in loving peace (Revelation chapters 13, 17-19).

This interview backs up the contents of Herbert W. Armstrong’s warning message in his most requested book, The United States and Britain in Prophecy. Join over 6 million others and request or download your free copy today.