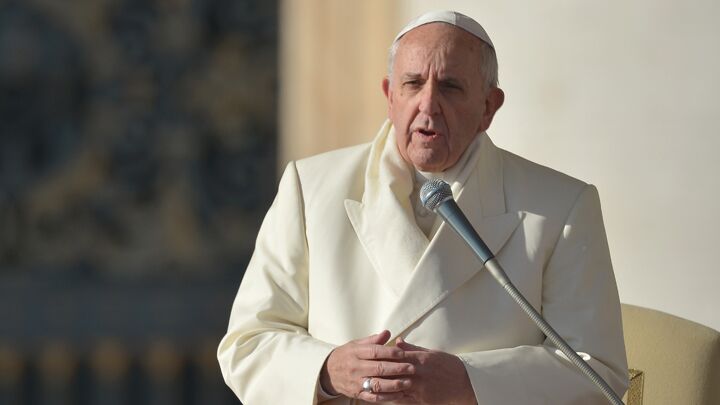 Pope Francis is adamantly opposed to free-market capitalism, and he denies being a Marxist. What does this make him? You need to know the answer!

Pope Francis has once again shaken things up on the world scene. He has written a new apostolic exhortation, “The Joy of the Gospel,” which declares an official enemy for the Catholic Church: free-market capitalism.

“Some people continue to defend trickle-down theories which assume that economic growth, encouraged by a free market, will inevitably succeed in bringing about greater justice and inclusiveness in the world,” Francis wrote in his exhortation. “This opinion, which has never been confirmed by the facts, expresses a crude and naive trust in the goodness of those wielding economic power and in the sacralized workings of the prevailing economic system.”

The pope’s statement is clear: He has taken a stand against libertarian-leaning, pro-free-market economic policies.

Throughout his exhortation, Francis attacks “unfettered capitalism” as “a new tyranny.” He condemns “income inequality,” the “culture of prosperity,” and “a financial system which rules rather than serves.”

“As long as the problems of the poor are not radically resolved by rejecting the absolute autonomy of markets and financial speculation and by attacking the structural causes of inequality, no solution will be found for the world’s problems or, for that matter, to any problems,” he writes.

In particular, he calls for action beyond a “simple welfare mentality” and asks for an “overhaul of the financial system.” The rich must share their wealth, he writes, and politicians must guarantee all citizens “dignified work, education and healthcare.”

Such calls, especially the ones condemning Reagan-style “trickle-down” economics, have many free-market advocates up in arms.

Such criticism does not seem to upset Pope Francis. “The Marxist ideology is wrong,” he said regarding Limbaugh’s comments in an interview with La Stampa. “But I have met many Marxists in my life who are good people, so I don’t feel offended.”

Later in the interview, Francis reiterated that he isn’t changing Catholic social doctrine. “There is nothing in the exhortation that cannot be found in the social doctrine of the Church. … I was not, I repeat, speaking from a technical point of view but according to the Church’s social doctrine. This does not mean being a Marxist.”

So, Pope Francis is adamantly opposed to free-market capitalism, and he denies being a Marxist. What does this make him? Forbes magazine lists the current pope as the fourth most powerful person in the world. You need to know the answer to this question.

The Return of Feudalism

With the defeat of the French Emperor Napoleon at Waterloo, the old feudal economic system of medieval Europe was swept away.

Grieved by what he saw as the twin evils of Protestant capitalism and atheistic socialism, Pope Leo xiii penned an apostolic exhortation in 1891.

This exhortation, “On Capital and Labor,” described an economic model which soon gained wide acceptance as a “Third Way.” In reality, however, this model wasn’t a new system. It was an updated version of the medieval feudal order.

Its premise was that equality is a cruel illusion; people are happiest when placed in a hierarchy guided by the Roman Church. Competition is spiritually demeaning. Therefore business, labor and the state must work together in vertically connected swathes of the economy called corporations.

These corporations would control the economy by setting quotas, prices and wages. They would regulate individual behavior to protect the social order and provide a just standard of living for all. Abuses of power would be prevented by the guidance of an ethically superior elite, made selfless by the teachings of the Catholic Church.

Regarding the value of labor, Pope Leo writes that “it is only by the labor of working men that states grow rich. Justice, therefore, demands that the interests of the working classes should be carefully watched over by the administration.” Regarding the role of the state, he writes that “it lies in the power of a ruler to benefit every class in the state, and … to promote to the utmost the interests of the poor.”

As summarized in a paper by Randall Morck and Bernard Yeung at the Center for Capitalism and Society, Catholic Corporatism applies a “Principle of Subsidiary.”

“The church safeguards souls, and must retain power over all matters it judges necessary to this end, but should leave other matters to the prince,” they write. “The prince retains power he deems necessary for governing his realm, but other matters subside to the corporations. These retain powers they deem necessary to setting their just wages, prices and quotas, but other matters subside to the industrialists. Industrialists retain such powers as they need to govern their businesses, but details subside to shop foremen. These charge master tradesmen with task, but leave them to get on with it, and so on down to the lowest worker ….”

Really, this Catholic corporatist system is just feudalism for the industrial age. Unlike free-market capitalism, this system does not allow private individuals to establish businesses outside of society’s established hierarchy. Pope Leo’s exhortation purports to defend the poor, but errs in denying the realities of human nature.

Just like Marxist socialism, Catholic corporatism presumes the reliability of a “benevolent” and “compassionate” elite. However, 1,200 years of medieval history prove that Catholic bishops are no less vulnerable to the corrupting temptations of power than were Lenin’s central planning engineers.

After the stock market crash of 1929 and the Great Depression, many people around the world became disillusioned with the Wall Street brand of capitalism being practiced and turned to corporatism as an alternative. By substituting “Fascist Party” for “Catholic Church,” Benito Mussolini more or less co-opted Pope Leo’s economic system.

Even though Mussolini’s one party state fought occasional battles with the Catholic Church over state control, the Vatican accepted his corporatist economy. Mussolini declared the Holy Roman Empire restored and, in return for Catholic endorsement in the Lateran Treaty of 1929, he established Roman Catholicism as the only recognized religion in Fascist Italy. His treaty also subsidized Catholic clergy, subjected textbooks to church veto and made insulting the Vatican a penal offense. All of this delighted Pope Pius xi, who spoke of Mussolini as “a man sent by Providence.”

Austria established a corporatist dictatorship of Catholic clerics under the leader of Engelbert Dolfuss in 1933. Then in 1936, Generalissimo Francisco Franco staged a coup d’etat in Spain and faithfully replicated Italian corporatism with his National Syndicalism movement. After Adolf Hitler appointed Marshall Henri Phillippe Petain as the head of Vichy France in 1940, the devoutly Catholic Petain also established a corporatist economy based on the writing of Pope Pius xi.

Even Hitler followed in the economic footsteps of the Roman Catholic Church and Benito Mussolini. After coming to power in 1933, his Reich Economic Ministry assumed the power to suspend the creation of new enterprises and to fix the production capacity of existing enterprises. Within months, the German economy was partitioned into 28 employer-employee industrial corporations. All of these were controlled by the Reich Economic Ministry.

Like Mussolini, Hitler also fought battles with the Catholic Church over control of the state. In return for a Vatican Concordat designed to keep priests out of politics, however, Hitler granted complete freedom to Catholic confessional schools throughout the country, among other things.

In his book Adolf Hitler, author John Toland recalls the Vatican’s enthusiasm for entering into a relationship with the Third Reich. “His holiness welcomed Hitler’s representative, Franz von Papen, most graciously and remarked how pleased he was that the German government now had at its head a man uncompromisingly opposed to communism and Russian nihilism in all its forms.”

After the Second World War, Latin American Catholic dictators like Juan Peron and Augusto Pinochet ran openly corporatist economies with papal blessing. In fact, one of the primary criticisms of the current pope is that he failed to stand up to the Catholic corporatist military junta that ruled his Argentinean homeland in the 1970s.

It is a Christian principle to care about the poor. However, when a humanly run state steps in to force people to do their Christian duty, things end badly.

History teaches us that all forms of human totalitarianism fail—whether communist, socialist, fascist or Catholic corporatist. Both Pope Leo and Pope Francis have been astonishingly overconfident in their assertion that the Catholic Church possesses a power to bring men to act selflessly in the service of others.

As the European economic crisis intensifies, nearly one in four young people are without work across the eurozone. In some southern eurozone nations, like Spain and Greece, the situation is dramatically worse.

The Spanish unemployment rate for those under 25 reached 56.5 percent last year, while the figure for Greece surged to 57.6 percent. Neither of these statistics include people who have stopped looking for work or who have taken part-time jobs.

As the Trumpet has reported extensively, the root cause of this unemployment crisis is a deceptive trade imbalance foisted on the unsuspecting nations of Europe by the German-engineered creation of the euro.

Regardless of this fact, however, millions of unemployed masses across Europe are in desperate straits and have no interest in supporting the current economic order. Faced with mass social unrest, it is possible that some countries may quit the euro. Others, however, will undoubtedly turn to Germany, willing to do almost anything to get German guarantees of employment and financial stability.

As the Trumpet’s UK and Europe correspondent Richard Palmer wrote last January, “This huge unemployment rate could be the hammer, anvil and furnace necessary to forge a newly integrated Europe.”

The pope’s new apostolic exhortation, “The Joy of the Gospel,” is likely to be met with widespread enthusiasm across southern Europe. What could be better, in their minds, than a “compassionate” mother church to convince the German fatherland to guarantee all European citizens dignified work, education and healthcare?

For decades, Herbert W. Armstrong taught how the Bible predicts the emergence of a seventh and final resurrection of the Holy Roman Empire. This United States of Europe, he warned, would be ruled by Germany and bound together by the religious glue of Roman Catholicism.

Just like Pope Leo xiii, Pope Francis is advocating a Catholic corporatist economy. Knowingly or unknowingly, he is catering to German business interests and the desire of the poor all at once. The German industrialist would keep a monopoly over European business and then transfer down enough wealth to keep the poor in a docile state. To millions, this will sound like a win-win situation. We must remember, however, that all humanly run totalitarian systems end in suffering. As mentioned above, power tends to corrupt human beings, even devout Catholics.

In the August 1952 edition of the Plain Truth, Herbert Armstrong wrote, “Nazism has always been defined as the German form of fascism. And so it is, with one slight shade of difference! Nazism was purely a national German fascism—whereas pure fascism, as it has existed since 600 years before Christ, is an international fascism! And pure fascism always united with the Roman Church!”

To find out more about the “Holy” Roman alliance of 10 kings now forming in Europe, and about the conditions they will demand for economic “security,” please read Herbert Armstrong’s classic booklet Who or What Is the Prophetic Beast?