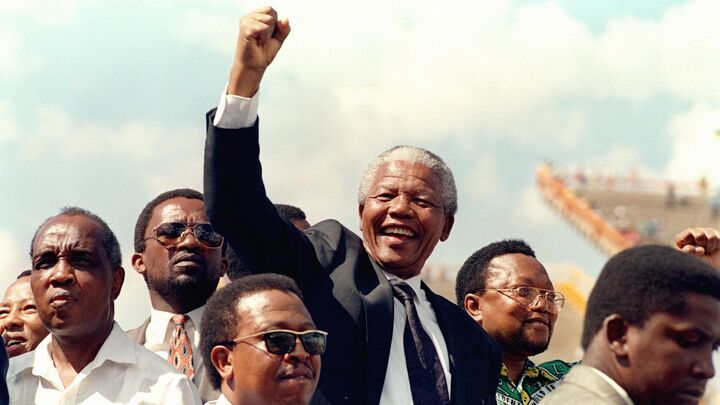 To win at this stage, says American Communist Rick Nagin, we need to emulate the steadfastness shown by Nelson Mandela and the South African Communist Party.

Communist revolutions can be bloody affairs, but often they occur as slow, subtle processes. This is the lesson of a recent editorial in People’s World, a socialist news site linked to the Communist Party usa (cpusa).

In this article, Ohio cpusa leader Rick Nagin praises former South African President Nelson Mandela as a man who never abandoned communism, but who instead used business and other social forces to move his nation “forward” to socialism.

“The official line in the mass media is that while the U.S. sided with the apartheid regime for Cold War reasons, Mandela is now acceptable and can be honored because he allegedly changed while in prison and moved away from revolutionary forces in the [African National Congress],” writes Nagin. “The truth is the exact opposite.”

“When the apartheid regime offered to release him if he would renounce violence and break ties with the [South African Communist Party], Mandela … refused. As Mandela himself insisted, he never stopped being a revolutionary. It’s just that revolutionary theory is far more subtle and sophisticated than the media is willing to recognize.”

Quoting historian Stephen Ellis, Nagin writes that the African National Congress (anc) “officially claims still to be at the first stage … of a two-stage revolution. This is a theory obtained directly from Soviet thinking.” According to the anc and the South African Communist Party (sacp), the nation must first pass through a stage of “bourgeois democracy” before moving into its final socialist stage.

Nagin points out that it was the sacp that convinced Mandela to resist those “who demanded immediate nationalization of the mines and other industries and other measures of retribution contained in the South African Freedom Charter.”

Both Mandela and his communist comrades knew that the world would not accept such drastic moves at that time, so they advocated a strategy of staged-revolution. First South Africa would “cooperate” with capitalism so the anc and the sacp could gain power. Then the final socialist revolution could occur later.

“Real communists understand they are part of history,” writes New Zealand author and political activist Trevor Loudon. “They see their mission as long term, stretching well beyond their own lifetime. They understand that to move humanity ‘forward,’ it will often be necessary to work with and manipulate unfriendly or even opposing social forces to achieve some incremental change towards their ultimate goal.”

The conclusion that cpusa member Rick Nagin draws from Mandela’s history is that the American Communist Party needs to be equally subtle and disciplined as it pursues its own goal of socialist revolution.

“All revolutions go through stages, including the revolution that established capitalism in our country,” he writes. “The first anti-colonial stage was led by George Washington, but the completion, the second stage, required elimination of slavery, and was led by Abraham Lincoln. … Today we in the U.S. face the challenge of defeating right-wing extremism.”

In order to defeat the conservative movement in America, Nagin ends his editorial with a figurative call to arms: “The extremists are growing more isolated and the progressive forces are gaining strength, but the support of the Democratic parts of the ruling class is still very much needed. The newly formed Wall Street-based ‘Third Way’ group could be an effort to split the Obama coalition.

“To prevent this and win at this stage we need to emulate the steadfastness and political maturity shown by Mandela and the South African Communist Party.”

The cpusa endorsed both Obama presidential campaigns and has referred to the 76 members of the Congressional Progressive Caucus as ideological allies. Now its Ohio leader, Rick Nagin, is calling for communist cooperation “with segments of business” and of course the “Obama coalition” to bring about a socialist America.

The defeat of the American conservative movement is the last stage of revolution that Nagin lists before the final “defeat” of “corporate power altogether.” If this revolution is successful, the unemployment, poverty, corruption, crime and murder that plague South Africa may soon be a part of everyday American life.

While apartheid and corporatism certainly are not part of God’s government, some unsavory characters are co-opting calls for racial “equality” and economic “justice” as a Machiavellian front to inject godless Communism into society.

Granted, there are only about 2,000 card-carrying Communist Party members left in the United States, but a startling new Rasmussen poll finds that 11 percent of Americans think that communism is better than the current U.S. economic system.

Another Rasmussen poll finds that 24 percent of all Americans—including 45 percent of those in the Democratic Party—have a favorable view toward socialism. The Congressional Progressive Caucus, which was founded by the Democratic Socialists of America, now encompasses 14 percent of Congress.

In a 1979 World Tomorrow telecast, Herbert W. Armstrong warned, “If the United States gets divided too much between the idea of freedom and the idea of communism, this country could not stand.”

While the word “communism” is not used much in America today, it’s clear that both America and South Africa have become deeply influenced by the idea of communism.

To more fully understand this influence, please request or download our free booklets South Africa in Prophecy and America Under Attack.