A look at water shows that the idea of evolution is all wet. 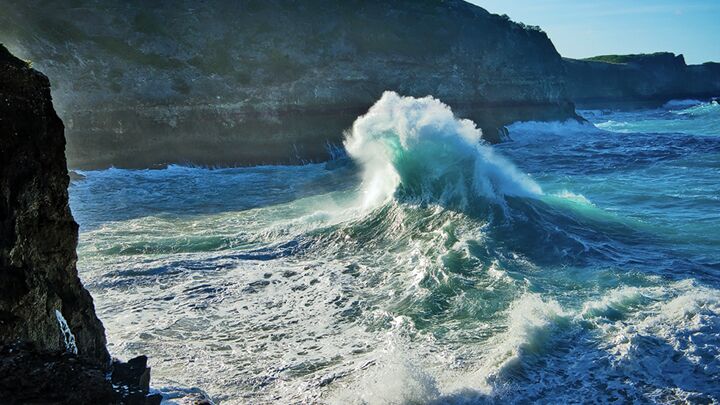 A look at water shows that the idea of evolution is all wet.

It does not seem too difficult for evolutionists to imagine that one species of life gradually adapted and changed into a different species of life. But the truth is, scientists simply cannot produce the evidence necessary to prove their hypothesis.

The truth is, everywhere you look, without exception, the universe provides the evidence of a supreme Designer—a Creator. A universe this vast, and at the same time so intricately balanced according to so many complex natural laws, could not happen by accident.

This article will demonstrate another outstanding proof for the fact of creation. Scientists have primarily concentrated on the ability of living things to evolve into higher creatures able to survive on Earth. Let’s examine the fact that water, the primary non-living substance on Earth, has been perfectly designed to fit the needs of all living creatures.

Being inorganic, water could not have evolved. Yet it has many unique properties or “exceptions” to nature’s rules that are absolutely essential to life on Earth. In addition, as we shall see, water has many characteristics that can reveal the “invisible things” of God— even His eternal power—if we are willing to accept such knowledge (Rom. 1:18-22).

Water, in its solid form—ice—and in its liquid form, covers about 70 percent of Earth’s surface. Oceans and lakes are able to store up the heat of the sun during the summer and slowly release that heat during the winter, helping to moderate the temperatures and climate of the Earth year round.

The Bible says that “blood is the life” of man (Deut. 12:23), but did you know that water constitutes about 92 percent of blood? Since most living things consist primarily of water, once the supply of water is removed, death is certain to speedily follow.

Water is a liquid between 32ºF (its freezing point) and 212ºF (its boiling point). No other common substance is found in liquid form at such a wide range of ordinary temperatures—temperatures found in most places on Earth. If water behaved like most of its closest relatives, no liquid water would be found on Earth—it would have all changed to steam or water vapor. Think about it: Most other liquid substances are not found naturally. They are man-made substances that must be refined and purified by a designer or manufacturer.

When we understand nature’s “water cycle” whereby heat and wind cause water to evaporate, rise into the clouds, cool down and then precipitate as rain or snow, we realize that a Designer made a continuous source of fresh “purified” water.

Perhaps the most unusual quality of water is what happens when it cools. Most substances contract as they grow colder, but when water reaches 39ºF, it begins to expand. By the time the temperature reaches 32º and forms into ice, it reaches its maximum volume. Because water expands when it freezes, it weighs less than the liquid water around it. That is why ice floats to the top of oceans and lakes. That layer of ice actually insulates the water below from the cold, preventing it from freezing to ever greater depths. Eskimos recognize the insulating qualities of ice and build igloos out of ice to protect themselves from the extreme arctic temperatures. Farmers have learned to use this principle by spraying plants with water just before a cold front hits. The resulting ice insulates the plants at a temperature of 32º and actually protects the plant from more severe temperature drops.

If water contracted when it froze, ice would weigh more than liquid water, and sink. If ice sank, it would pile up at the bottom of lakes, rivers and oceans. The sun’s heat could not reach deep enough to melt the ice. Gradually, all water would become solid blocks of ice except for a very thin top layer that would melt in the sun’s heat and quickly freeze again at night. Earth’s temperature would become extremely cold, and the majority of all plant and animal life would die.

If spilled on the floor, water will gradually “disappear.” Its molecules move so quickly that some of them gradually break free from the surface and enter the air as vapor. The warmer the water, the faster the molecules move, and the quicker it evaporates. Without this property, we would not have the frequent formation of clouds and the resulting rains needed to bring life to animals and plants. If water did not evaporate at relatively low temperatures, all water would eventually end up in the oceans, and life on land would become impossible.

Water’s surface tension is extremely high. This means water has the ability to stick to itself and other substances. When water sticks to cloth, glass or dirt, it makes them wet. This property provides some of water’s ability to clean.

Water vapor also tends to stick together, or “condense,” while floating in the air. This property helps form the drops of rain or snow so necessary to complete the water cycle.

Water is able to dissolve many substances, from sugar to dirt. Water can even gradually dissolve the hardest rocks while it sticks to their surface. It is then able to carry these dissolved minerals and other nutrients from the rocks to be used in the cell tissues of plants. This characteristic of water enriches the nutritive value of plant life, which in turn benefits any animal or person that consumes the plant.

Water has an extremely high ability to climb up the surface of a substance against the pull of gravity. This is called capillary action. This ability, coupled with a few properties named earlier, enables water to circulate through the soil, and to rise up the roots and stems of plants. Water can rise hundreds of feet to the top of the tallest trees before being released into the air as a vapor. Without this important property, water would simply soak into the soil and quickly sink out of reach of plants and animals, making it nearly impossible for plants to receive much-needed moisture between rains.

Water has a greater heat capacity than any other substance except ammonia. Heat capacity is the ability of a substance to absorb heat without getting warmer itself. This “hidden” heat that is absorbed is called latent heat. When ice is being heated, the temperature remains the same until the ice is completely melted. The added heat energy is used to make the change from solid to liquid rather than to raise the temperature.

To illustrate this point, just think of a sweltering summer day, with two items baking in the sun: a sheet of metal and a sheet of melting ice. Which substance would you rather have to walk across barefoot? If the metal and the ice had both started at absolute zero (the point at which a substance contains absolutely no heat) and were heated with the same amount of energy, the metal is already uncomfortably hot when the ice, though starting to melt, is still cold.

An additional benefit of heat capacity concerns water’s other form change: from liquid to steam. When water reaches 212ºF, it does not immediately turn to steam. It absorbs an enormous amount of additional heat without any further rise in temperature. This extra amount of absorbed heat is also latent heat. Man has learned to harness this heat energy to operate the steam engine and other types of machinery. Water can also move with tremendous power as ice or liquid. Man has learned to harness this power to produce electricity and other forms of energy.

These precise laws of water ought to prove the existence of a Lawgiver and Designer behind these things we see around us. How did water “evolve” all these perfectly suited properties, vastly different from all other substances on Earth, yet uniquely suited to make life possible for plants and animals? The answer is, water did not evolve. It was perfectly designed by a Creator God who was able to anticipate all man’s needs prior to the creation of all we see.

The Beauty of Creation

In addition to all these amazing properties, God made water to have breathtaking beauty. It makes little difference where we find water or what form it takes, it is amazingly beautiful.

Who among us does not enjoy a gentle rain glistening amid the bright sun’s rays and accompanied by a long broad rainbow against the backdrop of a distant landscape? What child is not thrilled by the winter wonderland created by freshly fallen snow? Then we have the beauty of cascading streams rolling over rocks or dropping off cliffs in either narrow ribbons or vast sheets like those of Niagara Falls. Lakes come in all shapes and sizes, with mirror-like reflections or white-capped turbulence. Oceans have a splendor all their own, and they seldom rest from the continuous pounding of the coastal shores. Clouds also come in all shapes and sizes to beautify any sky.

Is water’s beauty just another “accident” of evolution? Artists throughout history have tried to capture that beauty, but have failed to accomplish anything but cheap, static imitations. God keeps right on creating such breathtaking beauty moment by moment, in fascinating combinations—whether or not anyone is present to witness it beside Himself.

Can an evolutionist glorify the “big bang” for providing such majestic scenes? Who do such people thank for life and its great provisions and artistry? If they believe in God (as some evolutionists claim to), why do they deny that He created it all exactly as He says—with each plant and animal being produced after “his kind” (Gen. 1:11-12, 21, 24-25)? God Himself denies using the process of evolution in His creation. This physical creation with all the plants and animals that we see around us was formed just as He said it was, in one magnificent week of creation.

Can’t evolutionists see how foolish they are to deny the great design behind all that we see each day? Why do people insist on rejecting the obvious? God is angry with them for being so steadfast and vain in their ignorance!

The good news is that God will not keep His anger with man forever. The time is coming soon when Jesus Christ will return to Earth and establish a world-ruling government that will force man to abandon his vain imaginations and to face the truth. The Prophet Isaiah foretold that at that time, “the earth shall be full of the knowledge of the Lord, as the waters cover the sea” (Isa. 11:9).

You don’t have to wait for that day. You can have that knowledge of God right now. You can begin living a life of thankfulness and praise to the Creator God right now. Don’t let your heart be darkened by the vain imaginations of those who proclaim the hypothesis of evolution. You—and all mankind—would be so much better off to face the simple truth recorded in the first sentence of the Bible: “In the beginning God created the heaven and the earth.”