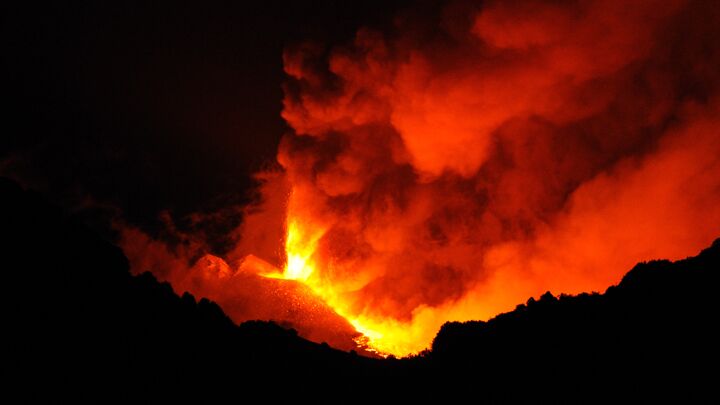 A brand new island created by volcanic explosion is quickly growing and will likely remain a fixture of the Pacific landscape, Japan’s Meteorological Agency said on Thursday. The island was formed from lava that cooled and hardened above sea level after a large underwater volcano began erupting in late November.

While it is quite rare for new islands to spring up out of the sea, instances of major volcanic eruptions—especially for 2013—are becoming commonplace. In fact, 2013 will go down in history as the year with the most volcanic eruptions since record keeping began.

As of mid-December, the number of volcanic eruption for the year was at 83, according to calculations by Alvin Conway, author of The Extinction Protocol. Considering that the average is between 50 and 60 per year, this represents a significant increase. This number does not even include undersea volcanoes like the one that produced the new Japanese island.

Conway wrote about the potential importance of the uptick in eruptions: “While most scientists may readily dismiss any significance to the latest figures and may be quick to say the planet is just experiencing normal geological activity, it does raise other concerns about just what may be transpiring within the interior of our planet.”

Having 23 to 33 eruptions more than usual represents a potentially significant increase in the amount of ash and gases entering into Earth’s atmosphere. Some analysts believe the increase could lower global temperatures by 2 degrees Celsius or more, which could be enough to alter agricultural yields in key regions.

Whether or not the increased number of major volcanic eruptions ends up dropping global temperatures, the trend is significant.

The Holy Bible reveals that the God who created Earth and the whole universe can cause volcanoes to erupt: “Mountains have shaken because of Him, And the hills have been melted” (Nahum 1:5, Young’s Literal Translation). Psalm 104:32 says, “He looketh on the earth, and it trembleth: he toucheth the hills, and they smoke.”

Although, Jesus Christ is not recorded as having mentioned volcanoes specifically, He did talk about earthquakes, which often trigger volcanic activity. During His earthly ministry, Jesus Christ said earthquakes would increase in the time just before His return. “[T]here shall be famines, and pestilences, and earthquakes, in divers places. All these are the beginning of sorrows” (Matthew 24:7-8).

It seems that every few weeks the Earth unleashes devastating violence of one kind or other: a volcanic eruption, an earthquake—a tornado—a tsunami—a mega storm—a flood—drought—a rash of wildfires. The events level property, raze homes, destroy crops, and take lives. But Bible prophecy makes plain that these disasters signal that this present evil world is about to end. In the rubble of the catastrophes lies invigorating hope.