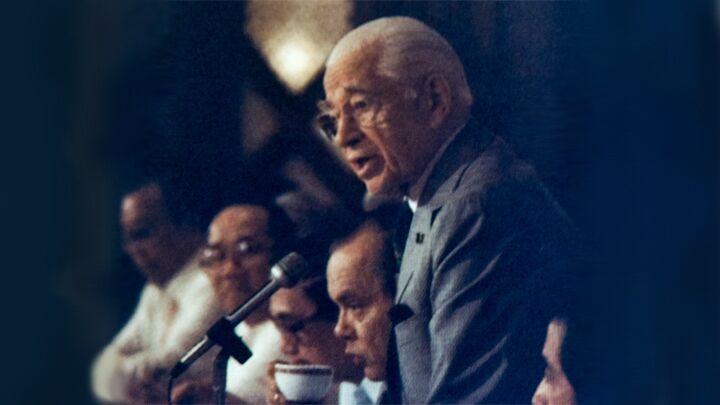 He declared that human survival was at stake and explained how world peace would soon come.

“This afternoon it gives me great honor and pleasure to introduce to you a man of peace and a man of God,” said a speaker at Manila’s University District Rotary Club in February 1982.

“Known to diplomatic corps all over the world as the unofficial ambassador for world peace and as a builder of bridges between peoples everywhere,” the speaker continued, “our guest of honor, fellow rotarians and friends, this afternoon, is said to be the man who has met more world leaders in their private offices than any man alive today.

“He’s worked as pastor general of his church, as chairman of Ambassador College and the Ambassador Foundation, as editor in chief of the Plain Truth magazine, as a tv and radio broadcaster all over the world.

“I now ask each and every one of you to welcome and to listen to the message of peace given to us this afternoon by none other than Dr. Herbert W. Armstrong.”

As the 100 businessmen and women attending this special luncheon stood and applauded, Mr. Armstrong rose to speak.

He began by recognizing the Rotary Club motto of “he profits most who serves best” and recommended they consider changing it to the reverse. The message that followed was a most powerful declaration of the way of peace to corporate leaders in Southeast Asia.

“This whole world is in trouble, and we are approaching a final grand smash climax. And I ask you to open your ears. You better listen to this because we’re all asleep! We’re going along just supposing that everybody is so kind and so good that they won’t use the nuclear weapons and other weapons that have now been invented that can blast all humanity of the face of this planet. You need to remember that no weapon of destruction has ever been invented that man has not used and he will use it.”

“The life of every one of us is at stake and we just go ahead with our minds on our daily pleasures, our daily interests, our daily business, and we just suppose that it isn’t going to happen here. But I need to warn you that you’re living in a very troubled world.”

Mr. Armstrong reminded his listeners of Germany starting World War ii, which drew in the world powers, and even the Philippine nation. He asserted that a third world war would be far worse in scale and impact. He told the rotarians that “there is a cause for every effect.” He cited that paradox of awesome technological advancement occurring right alongside appalling moral evils where man proves himself unable to cooperate with his fellow man.

Furthermore, he told them man was not created with the ability to have good relations with his neighbor. He recounted how the first man was “offered that knowledge,” not “made” with it. He explained that the true life offered him came through the Spirit of God, which would in turn have “revealed to him spiritual knowledge” so he could have had peace with both God and his neighbors.

Mr. Armstrong authoritatively explained to the corporate assembly how man “spurned” and “rejected” that offer from God and decided for himself which way he should live. He said, “man built his own religions, and all the religions are man built, they didn’t come from God. It’s time you wake up and realize that.” He went on to show how humans built systems of civilization, economics, social and education while yet ignorant of what the mind of man is composed.

“We’re going to come to the place that no human being will be left alive if God Almighty didn’t intervene! Its going to get that bad! And conditions are worsening day by day and year by year right now.

“And when it does get to that place God is going to send Jesus Christ back to this earth again as the King of Kings and the Lord of Lords! And He’s going to take over every government.”

“I’m here to tell you, I’m not here to sell you anything. I’m not here to get any members. I don’t seek members. I don’t seek money. I’m here to give, not to get. I’ve given you a message that’s worth millions of dollars to you, pesos or whatever you want to call it. But you can spurn it and treat it like an old sow would treat pearls, diamonds: Trample it in the mud and go for the slop. What you do with it is up to you. I’ve done my duty when I tell you. That’s all I’m here for.

“Well, thank you ladies and gentlemen for listening.”

This powerful message of peace was videotaped and broadcast worldwide on the World Tomorrow program. That program’s successor, The Key of David, has continued over two decades in the divine spirit and power which inspired Mr. Armstrong’s delivery of the Matthew 24:14 witness. Prophesying again, program presenter Gerald Flurry declares the assured intervention of God and restoration of world peace (Revelation 10:11).

Be sure to visit our website for regular broadcasts, program archives, transcripts and webcasts.