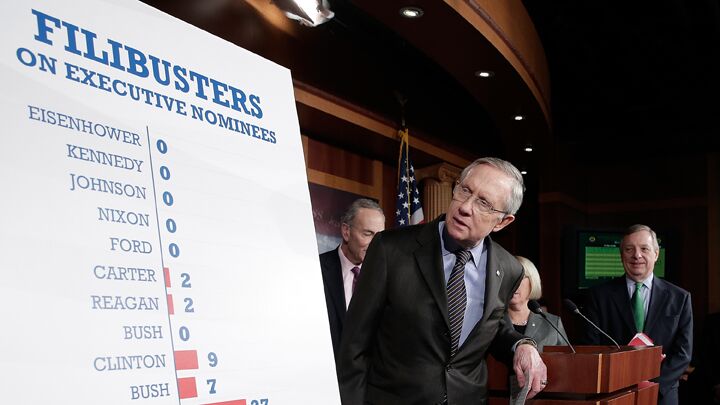 On November 21, the Senate approved the “nuclear” option to end filibusters for all presidential appointments, excepting Supreme Court nominations. This landmark ruling followed a 52-to-48 vote in which all but three Democrats supported ending filibusters for judicial and executive branch nominations, including cabinet positions and various high- and middle-level federal agency vacancies, and government board seats.

This is the first major rewriting of Senate rules since 1975, when the threshold votes for breaking filibusters was reduced from a 67-vote supermajority to a 60-vote supermajority. With new rules that have been pressed on by the majority Democrats, a simple majority is now all that’s required for the confirmation of the said nominations.

Prior to this ruling, Democrats had long been frustrated by Republicans blocking the confirmation of a number of presidential nominees. Most recent was the blocking of President Obama’s three lifetime appointments to the powerful federal appeals court.

This makes the change all the more significant.

After the ruling, the Democrats didn’t waste time in trying to push for the confirmation of judicial appointee Patricia Millett.

Charles Krauthammer commented on the greater significance of the abolition of the filibuster in his column “An Outbreak of Lawlessness”:

This was a disgraceful violation of more than two centuries of precedent. If a bare majority can change the fundamental rules that govern an institution, then there are no rules. Senate rules today are whatever the majority decides they are that morning.What distinguishes an institution from a flash mob is that its rules endure. They can be changed, of course. But only by significant supermajorities. That’s why constitutional changes require two-thirds of both houses plus three-quarters of the states. If we could make constitutional changes by majority vote, there would be no Constitution.As of today, the Senate effectively has no rules.

By limiting the use of filibusters, Republicans are rightly accusing the Democrats of a power grab that tramples the rights of the minority that the Founding Fathers sought to protect. Fascinatingly, Democrats are also invoking the Founding Fathers in defense of this change. President Obama said that the current obstructions by the Republicans through the filibuster are just not normal. “It’s not what our founders envisioned,” he said. “A deliberate and determined effort to obstruct everything, no matter what the merits, just to refight the results of an election is not normal, and for the sake of future generations we can’t let it become normal.”

Yet, in 2005, then-Senator Obama opposed the “nuclear” option saying that it “certainly is not what the patriots who founded this democracy had in mind.”

As Trumpet editor in chief Gerald Flurry has observed, Barack Obama has openly expressed his frustration with the constraints of the Constitution. In his article, “The Radical Left and the American Constitution,” for example, Mr. Flurry referenced a 2001 radio interview in which Obama said, “[The Supreme Court] didn’t break free from the essential constraints that were placed by the Founding Fathers in the Constitution.”

Back when the Democrats were the minority, they vehemently defended the right for a minority party to filibuster. Republicans had threatened to use the “nuclear” option to prevent the filibuster of President George W. Bush’s judicial nominees, but this was averted by a bipartisan group of 14 senators.

Senator Obama said in the house in 2005: “I urge my Republican colleagues not to go through with changing these rules. In the long run it is not a good result for either party. One day Democrats will be in the majority again and this rule change will be no fairer to a Republican minority than it is to a Democratic minority.”

Either Barack Obama was not being truthful when he made that comment, or this latest rule change by the Democrats is indeed unfair to the minority Republicans.

Senate majority leader Harry Reid, who strongly pushed for the “nuclear” option, admitted that his views on the filibuster have “evolved” over the years.

The question is, what else could evolve? Could filibusters against legislation be next to go? Some political commentators like Steven Hill think filibusters for legislation should be abolished too. Hill highlighted legislation that has been stymied in one way or another by such filibusters—the Affordable Care Act, sequestration, the Paycheck Fairness Act, the American Jobs Act, cap-and-trade and firearm background checks.

Democrat Sen. Christopher Murphy’s views on the filibuster, like Reid’s, also evolved, but mostly as a direct result of legislative matters: “I was a proponent of filibuster reform coming into the Senate,” he explained, “but I became a revolutionary on this issue when we lost the gun bill.”

Washington is increasingly becoming a divided, unstable house that will be easily tossed around by domestic and international storms. Senator Obama knew back in 2005 that by ending the filibuster, “the fighting and the bitterness and the gridlock will only get worse” between the parties. And that is truer today.

As Republican Senate minority leader, Sen. Mitch McConnell said after the “nuclear” option was approved, “[I]t’s a time to be sad about what’s been done to the United States Senate.”

Read Mr. Flurry’s article “The Radical Left and the American Constitution” and write for a free copy of his highly requested booklet America Under Attack to understand the far-reaching implications of what is happening in Washington today.