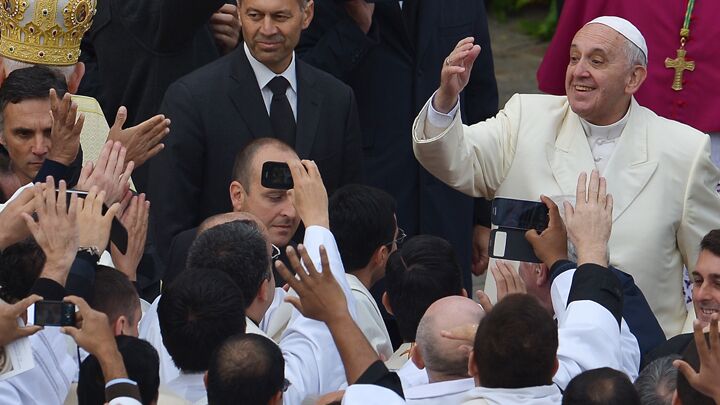 The pontiff may be alienating some of Europe’s conservative Catholics, but it’s nothing compared to the number of hearts he is winning among the Continent’s secularists and casual practitioners.

Some Bible prophecy watchers have been on the lookout only for a firebrand pope—a real zealot who appears capable of spearheading a revival of uncompromising, conservative Catholic dogma across Europe.

When Joseph Ratzinger became Benedict xvi back in 2005, he seemed to fit the bill.

Benedict drew a firm line between Catholicism and all other denominations and religions, labeling them all “defective” and saying they can’t even “be called churches.” He fiercely denounced same-sex relationships as a “manipulation of nature” that destroy “the essence of the human creature.”

Pope Francis i seems to be of a different stripe.

During his short time in office, Francis has reached out to all religions, meeting with leaders from the Orthodox Church, Anglicans, Lutherans, Methodists, and also Jews, Muslims, Buddhists and Hindus. He has even extended the olive branch toward atheists and agnostics saying, “God forgives those who do not believe and do not seek faith.”

Francis made headlines all over the world after he appeared to cede ground on the defining battlefield of our time. “Who am I to judge them?” he said about homosexuals. “They’re our brothers.”

Whereas Benedict often condemned “relativism” as one of the evils of our age, Francis said there’s no such thing as an “absolute truth.” While Benedict seemed never to pass up an opportunity to denounce the practice of abortion or use of contraception, Pope Francis said “it is not necessary to talk about these issues all the time.”

Because of Pope Francis’s apparent universalism, gentleness and liberalism, some Bible prophecy watchers may find it easy to be dismissive of him, believing him unlikely to become the leader who rallies Europeans to the fold and comes to wield great sway over the Continent’s politics.

But this view may not factor in the understanding that Europe, in terms of religion, is not the continent is was 50, 20 or even 10 years ago.

Historically, the power of the Catholic Church (and its daughter churches) was evident everywhere in Europe. Towering church spires defined city skylines, public preaching and prayer were commonplace, and a sermon could tip an election. But modern Europe is rapidly becoming what Catholic author Cristina Odone titled her new book, a No God Zone.

Look at the numbers in France. Back in 1965, over 80 percent of French people called themselves Catholic. By 2011, the number of France’s Catholics and other Christians combined was just 54 percent.

As momentous as this decrease is, it’s far less significant than the decline in France’s active Christians. In 1965, over 27 percent of French people went to Mass every week or more. Today, less than one percent are in the pews on a given Sunday.

The situation is similar in Germany. In 1950, 45.8 percent of Germans identified as Catholic and 50.6 percent as Protestant. By 2008, those numbers had fallen to 30 and 29.9 percent. And only 1.2 percent attended church services regularly.

This trend is basically consistent throughout Europe. An exodus from Christianity is underway.

The interesting thing is that only a tiny fragment of the declining percentages are due to the influx of Muslim immigrants. The bulk is because of the rising tide of another worldview: secularism.

“[R]ejection of absolutes in society under the banner of ‘tolerance’ resulted in marginalization of Christianity,” Patrick Johnstone wrote in The Future of the Global Church. “Increasing secularization and growing influence of liberal theology, and disillusion and cynicism following two world wars led to massive decline in church attendance.”

This secularization has accelerated exponentially in the last decade. In 2005, 14 percent of the French described themselves as “convinced atheists.” By 2012, that had jumped to 29 percent. In the same time, Germany’s “staunch atheists” jumped from 10 to 15 percent, and the Czech Republic’s from to 20 to 30 percent.

A ranking of the world’s top 10 nations by percentage of atheists, shows that seven are now in Europe.

A ranking of the world’s top 10 nations by percentage of atheists, shows that seven are now in Europe.

Alongside the “convinced atheist” is a strange new creature that couldn’t have existed in earlier epochs: the Christian-atheist hybrid. These odd chimeras are multiplying even more rapidly than the undisguised atheists. In France, for example, only 52 of those who call themselves Catholic now believe that the existence of God is “certain or possible.”

All these percentages represent hundreds of millions of Europeans. The continent is undergoing a deep ideological shift, and active Christianity is in such sharp decline it can hardly be thought of as alive.

It was in the midst of this great scene change that fiery Benedict took his bow, and Francis entered the Vatican from stage left. Benedict may still be back stage, perhaps ready to make another appearance or perhaps just whispering some lines, but it is Francis who is rewriting the script and rebranding the Mother Church as a bastion of acceptance, modesty and universalism.

The results of this have been staggering.

“Suddenly, being a Catholic feels good,” Odone wrote in the Telegraph on Nov. 17. “I am so grateful to [Pope Francis] for making ‘Catholic’ a word that does not automatically conjure up thoughts of homophobia, sexism and pedophilia.”

Mrs. Odone is not the only one stricken with Francis fever. From the second he walked out on the balcony in St Peter’s Square, making gentle jokes and encouraging his audience to make a figurative pilgrimage with him, Pope Francis has been winning hearts.

He’s now the most discussed person on the Internet. Francis is suddenly Argentina’s most popular name for baby boys. And he has won the respect of the media, evidenced most recently by Foreign Policy calling his the most impressive voice in the international arena.

Francis has spawned a surge in Catholic Church attendance in Italy, the UK, Spain and France. In some of these the increase is by as much as 20 percent. Some are calling it the “Francis effect.” Even Jews are ecstatic about this pope, saying he’s the first to ever be so personally involved with Jewish people. There is talk of Francis possibly praying at the Western Wall if he visits Jerusalem next year—a trip he is considering.

Francis has delighted Europe and the world with his modesty and gentleness, his seemingly inclusive overtures and his apparent desire to steer the curia away from absolutism and conservatism. He is viewed as a leader willing to soften the Vatican’s time-honored stances in order to better conform the Church to the secularizing Europeans.

It is true that Francis is alienating some of Europe’s conservative Catholics, but their dwindling numbers are far less significant than the numbers he is winning among Europe’s armies of secularists and birth-certificate-only Catholics.

Perhaps the most amazing aspect of the Francis-led Catholic revival is this: If you examine what the pope has actually said, parsing the words carefully, you see that no traditional Catholic stance has been contradicted.

Here’s the now famous “who am I to judge” statement that the media heralded as a reversal in Catholic teaching:

“When I meet a gay person, I have to distinguish between their being gay and being part of a lobby. If they accept the Lord and have goodwill, who am I to judge them? They shouldn’t be marginalized. The tendency [to homosexuality] is not the problem … they are our brothers.”

In truth, this statement only affirms the status quo in the Church’s position on homosexuality: Same-sex attraction (or in Francis’s words “the tendency to homosexuality”) itself isn’t considered a sin, and those who harbor it should not be ostracized if they decide to accept the Lord and Catholic Church teaching and change. That’s what the Church has always taught.

Similarly, his statements about atheists and agnostics never said they would go to heaven without changing their stance, but only that they would not be excluded from God’s forgiveness if they repent. He only reiterated a long-standing teaching of the Church, yet, because of the words he used, the secular media trumpeted it as a glorious sea change in Catholic dogma.

Francis is billed as the extemporaneous pope, happy to speak off the cuff about the Church’s “new direction,” but his words actually seem carefully chosen to give the appearance of a newfound liberalism—something the progressive media can run with—without actually altering established Church liturgy. It’s the best of both worlds.

It’s still too early to say whether Francis is spearheading a “Vatican spring” or if he will be the pope to steer the Church through the time just before the return of Jesus Christ. But it is undeniable that he is significantly improving the way Europeans and people all over the world think about the Mother Church. “They no longer sneer when I mention my faith,” Odone said about her secular European friends.

It’s still too early to say whether Francis is spearheading a “Vatican spring.”
The final iteration of the Roman Catholic Church that is described in Bible prophecy could well have some secularist underpinnings. In recent decades, the curia has loosened some of its tenets to appeal to Europe’s growing number of secularists. Its increasingly vague teachings already allow room for the evolutionary theory to reside within the tent of Catholicism. Such measures show that the Vatican is willing to inject enough secularism and rationalism into its doctrine to appease modern people. It seems to be trying to mix a “perfect” blend of secularism and mystery—just enough of each to create a mysterious force modern people are willing to yield to. Francis’s gentleness, his embrace of secularists and other inclusive gestures put him in a prime position to accelerate this blending tactic and to do what Catholic leaders have often done best: Assimilate the views of the masses into Church teaching in order to “convert” those masses and lead them.

Bible prophecy says that, in the end-time, the Roman Catholic Church’s leadership will appear to be gentle, sincere and “like a lamb.” In many ways, this description fits Francis better than any pope in recent memory.