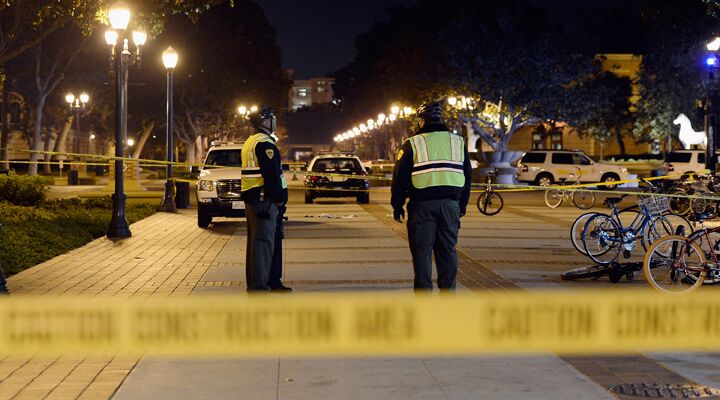 This evening people all around the Americas, Europe and other parts of the world will celebrate Halloween. The holiday is generally presented as a night of exciting parties, fun costumes, tasty candy and good times with friends and family members.

But is that all there is to Halloween? For the answer, look at what happened at some Halloween celebrations last year.

A man attending a Halloween party in Miami, Florida, pulled out a knife and stabbed four other men, critically wounding two of them. Near Clarksville, Tennessee, three friends rented a cabin for a Halloween party. An argument erupted and one pulled a gun, shooting the other two dead. At a party in Hollywood, California, a costumed reveler shot three people. In Los Angeles, a partygoer on the University of Southern California campus pulled a gun and shot four people. In Madrid, Spain, a throng of young people packed into an arena for a massive Halloween party. Around 4 a.m., an unknown scare caused them to stampede out of the building. Three women, 18 to 20 years old, were crushed to death in the chaos; two others were critically injured.

Those were just some of the incidents from one year of Halloween celebrations. Data show that nearly every Halloween sees an abnormally high number of violent crimes and instances of carnage.

Check out the giant spike on this chart published by the Boston Globe showing the violent crime rates in the city of Boston over a four-year period. “As shown, Halloween night, with its make-believe ghosts but very real assailants, is the worst evening of the year for violent crime victimization,” the report says. “The evening violent crime count on October 31 is about 50 percent higher than on any other date during the year, and twice the daily average.”

Police forces across Canada also report an upsurge of over 50 percent in weapon-related crimes on Halloween night. This same spike in violent crime occurs in cities and towns around the world where Halloween is celebrated. And it happens despite the fact that police forces are generally bulked up to maximum capacity that night.

Some analysts attempt to explain away the spike as a simple result of increased substance abuse. “I don’t think the crimes are really based around Halloween itself, but rather around the alcohol involved,” said Geoffrey Allen, a crime prevention specialist for the Virginia Tech Police Department.

But data show that Americans drink more on New Year’s Eve, Christmas, July 4th, St. Patrick’s Day and Thanksgiving than they do on Halloween. (Surveys from the UK and other nations yield similar data.) Increases in violent crimes occur during these other holidays, but they are not nearly as steep as the Halloween spike.

Something about Halloween violence goes beyond just alcohol abuse.

The Halloween holiday wears a disguise—a mask of fun and excitement. But beneath that guise, the holiday and its origins are dark and perverse.

The word “Halloween” is a shortened form of “All Hallows’ Eve.” It is often called “All Saints’ Eve” by Catholics and other churches who celebrate it as part of a three-day observance for honoring saints and praying for the “souls” of recently dead people.

But All Hallows’ Eve actually dates back centuries earlier than the founding of the Catholic Church, or even the birth of Christ. “The earliest Halloween celebrations [in Britain] were held by the Druids in honor of Samhain, Lord of the Dead, whose festival fell on November 1” (Ralph Linton, Halloween Through Twenty Centuries).

“It was a druidical belief that on the eve of this festival, Samhain, lord of death, called together the wicked spirits that within the past 12 months had been condemned to inhabit the bodies of animals” (Encyclopedia Britannica, 11th ed., Vol. 12).

These druids believed that All Hallows’ Eve was the night when the souls of the evil people who had died during that year would leave the bodies of animals they had been stuck inside and return to their former homes. If food was not provided for them at these homes, they believed the spirits would antagonize and cast spells on the residents. Many historians also say that, to appease the evil spirits, the druids would also offer animal and even human sacrifices.

When the Catholic Church came onto the scene and began working to convert the various civilizations of the world, it integrated many pagan observances into its liturgy. By this method, the church was able to appease great numbers of pagans and thereby gain more converts. The Catholics first added All Saints’ Day to their observances in the year 609, but it was celebrated on May 13. In 835, in response to pressure from Celtic and Germanic peoples, Pope Gregory iv switched it to November 1—the same day as the ancient Samhain festival.

A look into the Bible shows how outrageous it is that Halloween—a festival of darkness and death—was integrated into the liturgy of a church calling itself “Christian.”

Halloween’s themes of death and darkness are the very antithesis of true, Bible-based Christianity. The spike in violent crimes surrounding this holiday should be a wake-up call to any defending Halloween as “Christian” or claiming that the holiday is harmless fun.