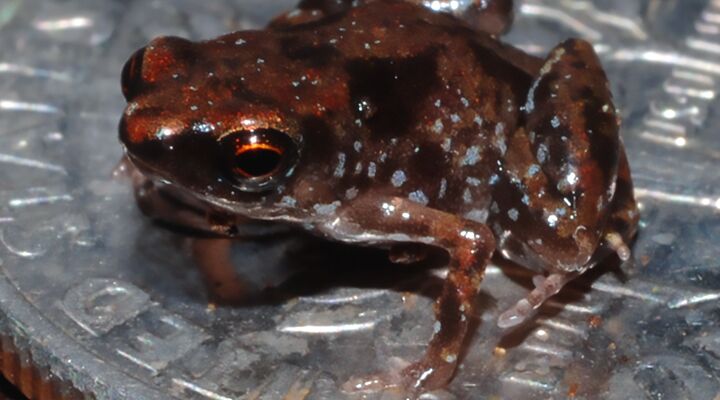 In the Amau villiage of Papua New Guinea, there’s a frog the size of an orange seed—the smallest known vertebrate species on Earth. In parts of the Democratic Republic of the Congo lives a monkey with human-like eyes that awakens the jungle each morning with its booming bellow.

The frog and the monkey share something remarkable: Both are brand new to science. They were only discovered and catalogued this year.

Trends show that the frog (Paedophryne amanuensis) and the lesula monkey (Cercopithecus lomamiensis) will not be the last species to be discovered. In fact, it seems that every time research teams machete their way into a jungle or plunge down to a coral reef, they emerge with samples of previously uncatalogued creatures. The total from such expeditions adds up to an astonishing 15,000 new species discovered each year.

Unsurprisingly, the bulk of these 15,000 newly discovered critters are insects, with beetles invariably being the most common. Yet the discoveries are not limited to just the small stuff. In 2009 alone, scientists found two new turtles, 133 new frogs and 41 new mammals.

Even after thousands of years of discovery, the diversity of Earth’s wildlife is still astonishing and humbling scientists. “I don’t know whether to be more astounded by the species discovered each year, or the depths of our ignorance about biodiversity of which we are a part,” said Quentin Wheeler, founding director of the International Institute for Species Exploration at Arizona State University.

“It’s astounding that we don’t know the most basic thing about life,” said Boris Worm, a marine biologist at Nova Scotia’s Dalhousie University.

“We know more about the surface of the moon and about Mars than we do about this habitat,” oceanographer Paul Snelgrove said of the deep sea floor.

Altogether, mankind has discovered and catalogued over 1.7 million different animal species, but estimates say the planet’s total number could be anywhere from 3 to 100 million. The wide range reveals that we don’t even know what we don’t know.

The mind-boggling array of animal life being discovered daily in our oceans, rainforests and other ecosystems testifies to the beauty, mystery and intricacy that the Creator saturated His creation with.

Thousands of years ago, when the list of discovered species was far smaller, the psalmist wrote, “O Lord, how manifold are thy works! In wisdom hast thou made them all: the earth is full of thy riches. So is this great and wide sea, wherein are things creeping innumerable, both small and great beasts” (Psalm 104:24-25).

The newly discovered lesula monkey and micro-frog—along with the banana fish, glow-in-the-dark cockroach, the nematode worm that lives only in the lungs of the changeable lizard, the Dracula fish, the Andean raspberry-size bat, the “Elvis” monkey, the Brazilian arapaima fish and the other thousands of newly discovered species give new weight to those adulatory words: “O Lord, how manifold are thy works!”

The creative capacity of the Great God is mind boggling and beautiful beyond words. Yet, even more mind-boggling, and even more beautiful is His plan to give this same capacity—the power to design and create complex life forms and to orchestrate ecosystems—to human beings!

For a full understanding of this breathtaking truth, as explained in the pages of your Bible, read The Incredible Human Potential.