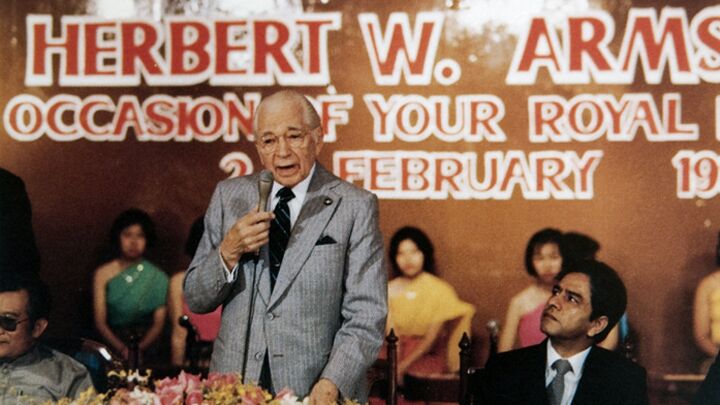 Unfailingly delivering a gospel message to ambassadors and royalty

What can be accomplished in 720 seconds?

The Apostle Peter exhorted Christians, “and be ready always to give an answer to every man that asketh you a reason of the hope that is in you with meekness and fear.” But he preceded that with, “but sanctify the Lord God in your hearts” (1 Peter 3:15).

Writing to co-workers on September 24, 1973, Herbert W. Armstrong, the internationally recognized ambassador for peace, recalled, “Last Wednesday night, in Bangkok, capital of Thailand, I was given just such an opportunity. I did not know of it in advance. But a banquet was held in a special banquet room of my hotel in my honor. Present were ambassadors representing the governments of Japan, Korea, Cambodia, Ethiopia and Israel, the president of the University, and Her Royal Highness the wife of the recent Prince Regent of Thailand, and other important guests.

“I was given a very warm, even emotional, introduction, and asked to speak. I had no idea how long I was expected to speak, so I confined it to exactly 12 minutes. But I spoke earnestly, and God gave me power.”

A half a century before, in 1926, Mr. Armstrong “sanctified the Lord God in his heart” as God called him to His service. His conversion and baptism in 1927, followed by ministerial ordination in 1931, prepared him for greater service in giving answers when asked to speak of “the hope” that was in him.

Beginning in 1934, that same divine power aided him in beginning a career that would see him grow into an accomplished international radio and television broadcaster, polished public speaker, accomplished publisher and writer. In 1967, he began speaking at global personal appearance campaigns, with international leaders, chiefs of nations, royalty, and even emperors. These experiences had prepared him well for his 720-second impromptu speech to Asian, African and Mideast ambassadors, and Thai royals.

Mr. Armstrong stood before his audience of dignitaries, telling them from the heart the following: “One who travels over the world, as I have, is forced to see the pitiful condition in which a majority of all people on Earth live, in utter ignorance, deep poverty, semi or total starvation, wracked with disease, living in filth and squalor. I have to ask, why? You people should be concerned about it! We have mind power to fly to the moon and back, yet we find the majority living in such conditions, we can’t solve our own problems here on Earth, we don’t know how to have peace! Why? Even where people are educated and prosperous, they are not happy! Why?

“For every effect,” he said, “there had to be a cause. Years ago, I made surveys. I learned people are not happy. Why? I finally found the answer, in the Bible! It’s a book people have refused to understand, which people have interpreted all out of natural and intended meaning, but taken for what it plainly says I found it makes sense, and answers the big questions! It contains the missing dimension in knowledge.

“The world doesn’t know: What we are, why we are, the purpose for which humanity was put on Earth, how to fulfill that purpose. What are the true values in life? What is the way to peace, universal abundance and happiness? Those are the basic things we need to know! Those are the necessary things to know which man, science, technology cannot discover! Those are the things the Bible reveals.”

“Then I covered the incident of the ‘forbidden fruit,’ how our first parents rejected God’s revealed knowledge, which He had started teaching them, how mankind cut himself off from his Maker, and has turned to imaginary and false gods, how man ever since has tried to reason out what is good and what is evil, what to do and how to do it, and has brought on humanity this colossal tragic mountain of human woes and anguish! Then I explained God’s way of life, the way of ‘give,’ of love which is outgoing concern for the good of others, of cooperation, instead of competition, strife and violence, because mankind has cut itself off from God.

“As Adam and Eve disbelieved God, rebelled, and disobeyed His inexorable spiritual law, sinned, so now man, by repentance of that disobedience, and faith which is to believe God and His Word, can be reconciled to God and receive eternal life. Then I explained how ‘Christ is coming again as the divine Messiah in supernatural power to rule all nations, and lead nations in God’s way, which will bring world peace, abundance, happiness, and eternal life as God’s gift.’

“Twelve minutes is not very long, but they did get the message! And, short though it had to be, that was Christ’s very gospel! And there was a very enthusiastic response! It did make important people think, and want to know more!”

Are you ready to give an impromptu answer for the hope that lies within you? Could you stand before ambassadors and royalty, speaking for God?

Like those ambassadors and royalty, do you want to know more? Request Mystery of the Ages at no cost, obligation or follow up. Read it with an open mind, prove out its hope filled message, and get ready to speak!