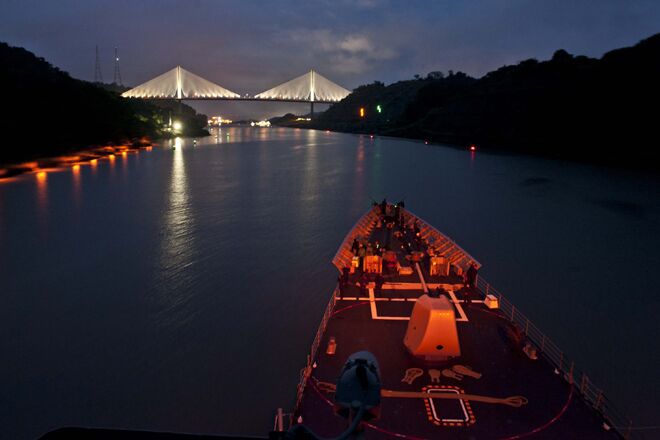 Bisecting the isthmus of Panama was a task of staggering proportions that had eluded world powers for centuries. Why was the U.S. able to succeed where others failed?

Before the Panama Canal was dug, only a handful of human endeavors had ever aimed to transform the basic topography of planet Earth. Men had accomplished numerous marvels of engineering—transcontinental railways, mammoth dams and bridges, and breathtaking royal residences—but none had done anything as foundational as slicing apart the very continents.

The Isthmus of Panama was first eyed by Charles v, Holy Roman emperor and king of Spain. In the 1520s, Charles V grew annoyed with the time required to deliver the vast wealth of Peru and Ecuador into his ports in Spain. He determined to hack that transit time down by digging a canal through Panama. The emperor ordered his men to conduct feasibility studies for it, but the Spaniards failed even to execute a concrete plan for a canal.

A Scourge to Scotland

In the 1690s, Scotland made an unsuccessful attempt at colonizing Panama and digging a canal through it, which plunged the nation into such severe financial trouble that the Scots felt compelled to enter a union with Britain in order to stabilize. Thus, the independent sovereign state of Scotland lost its autonomy, and has been a part of the United Kingdom ever since.

In the early 1800s, German explorer Alexander von Humboldt set his sights on Panama. He successfully mapped out plans for several different routes through central America, but those designs—and the disunited Germans’ interest in the endeavor—came to nothing.

France made the first concerted attempt on the project starting in 1881, but Panama’s rocky terrain, a shortage of investment and a wealth of mosquitoes crushed the effort after less than a decade. By that time, the French had spent over $260 million and had watched malaria, yellow fever and perilous working conditions send more than 22,000 laborers to their graves.

In 1904, under President Theodore Roosevelt, the United States paid France $40 million for its equipment and excavations, and paid Panama an initial payment of $10 million. But long before the Americans started digging, they built a railroad across the isthmus. The rail company also found a way to safely rid the project site of the corpses of fallen workers, which became an unexpected source of income: They pickled the bodies in brine, and sold them as cadavers to medical schools all over the world.

Before the Americans could start digging, they also had to stir up a revolution that tore Panama away from Columbia, and then wage war on the mosquitoes.

With these obstacles surmounted, the U.S. began to dig the “Big-Ditch.”

In 1914, after spending hundreds of millions of dollars, losing over 5,000 lives, and removing enough dirt to bury all of Manhattan to a depth of 12 feet, the Americans completed the Panama Canal.

The 51-mile-long marvel of engineering— designated one of the “Seven Wonders of the Modern World”—halved the time required for ships to sail between the Pacific and Atlantic oceans. It was a great boon to the U.S. and global economies, and also to the American morale.

But a geopolitical forecaster named Herbert W. Armstrong knew that America’s control of the Panama Canal would not last.

Using the Bible as his guide, Mr. Armstrong said the very fact that the U.S. came to build and control the Panama Canal is among the most powerful proofs of America’s biblical identity. He also relied on the Bible to predict Washington’s surrender of the canal long before it happened.

“America, before this is all over, is going to lose the Panama Canal unless it repents,” the March 1964 edition of Mr. Armstrong’s Plain Truth magazine said. Again, in November 1965: “The United States has done nothing but hedge, crawl, dodge, yield, relinquish, back down and give up ever since we began to build [the canal]!”

Mr. Armstrong even foretold how the U.S. would lose it: “Panama is destined to go—sooner or later. But not in glorious and heroic defeat after faithful resistance—but in utter ignominy. In useless and helpless sacrifice—in disgrace and shame” (ibid, July 1977). On top of that, he accurately predicted who would fill the power void left in the Canal Zone: “And—irony of ironies—we could even see engineers, pilots and technicians from the Communist world manning the canal jobs vacated by Americans!” (ibid).

It is deeply astonishing that all of these detailed predictions have now come to pass. Despite having completed the mammoth project, which no other world power could complete, the U.S. gave it up without a fight—in utter ignominy. And it was people with a Communist history that filled many jobs vacated by Americans, as the Trumpetreported in 1999.

To learn more about the detailed Bible prophecies Mr. Armstrong relied on to make this startling accurate forecast and many more, read The United States and Britain in Prophecy.