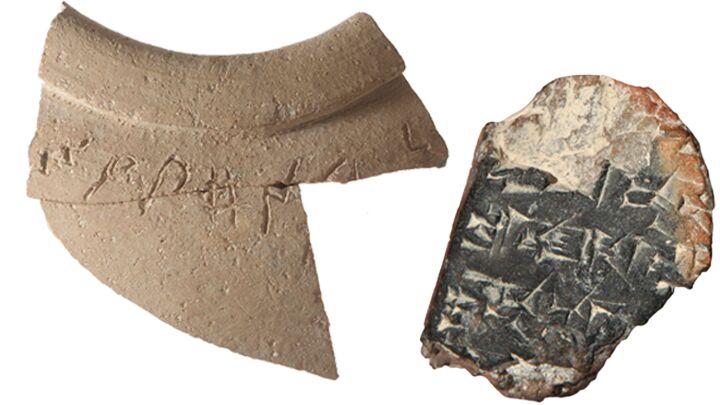 Another thrilling find of the 2010 season was a fragment of a 3,000-year-old clay tablet covered with cuneiform script. Discovered in the Ophel dig and currently on display at the Davidson Center in Jerusalem’s Old City, experts say the thumb-size splinter is the oldest written document ever found in Jerusalem.

In 2010, Dr. Mazar’s excavation team found a clay fragment containing 14th-century b.c. Akkadian cuneiform script. The fragment appears to have been part of a tablet, and contains the oldest text ever found in Jerusalem.

Archaeologists deciphered the words “you,” “you were,” “them,” “to do” and “later” on the fragment.

According to Hebrew University Prof. Wayne Horowitz, the high quality of the writing “indicates that the person responsible for creating the tablet was a first-class scribe.” Dr. Mazar believes the fragment likely came from a royal court.

“In those days, you would expect to find a first-class scribe only in a large, important place,” Horowitz said. He also explained the fragment was made from Jerusalem clay, attesting to Jerusalem’s importance as a central city of the area at that time.

The 14th century b.c predates the ancient Israelites’ entrance into the Promised Land, but Bible history reveals Jerusalem was an important city prior to King David’s rule. Abraham paid tithes to King Melchizedek in the ancient city of Jerusalem (Genesis 14:17-20), and the city later became a Jebusite stronghold (1 Chronicles 11:4).

The tiny fragment is 4/5 inch long and 2/5 inch thick. It was found while wet-sifting fill dirt from the Ophel, between the Old City’s southern wall and the City of David.

Later, in the 2012 season, a remarkable inscription was found on the rim of an ancient vessel. The vessel itself is dated to the 11th or 10th century b.c., the very time of David and Solomon. The exciting part of this inscription is that it is the oldest alphabetical writing ever to be discovered in Israel.

This inscription was discovered in the final days of the 2012 excavation season and was revealed to the public in July 2013. It is incised along the rim of a large pithos, a neckless ceramic jar.

“The inscription was engraved near the edge of the jar before it was fired, and only a fragment of it has been found, along with fragments of six large jars of the same type,” according to Eilat Mazar’s press release. “The fragments were used to stabilize the earth fill under the second floor of the building they were discovered in, which dates to the Early Iron IIA period (10th century b.c). An analysis of the jars’ clay composition indicates that they are all of a similar make, and probably originate in the central hill country near Jerusalem.”

Initially, the excavation team and epigraphic experts believed the language to be Canaanite, but further examination suggests the inscription is Hebrew, making it the oldest Hebrew inscription ever found in the city. “Dated to the 10th century b.c, the artifact predates by 250 years the earliest known Hebrew inscription from Jerusalem, which is from the period of King Hezekiah at the end of the eighth century b.c.” (ibid).

Dr. Gershon Galil of Haifa University believes one of the words on the inscription could be the Hebrew word for wine, possibly indicating the vessel was used to store that timeless beverage.