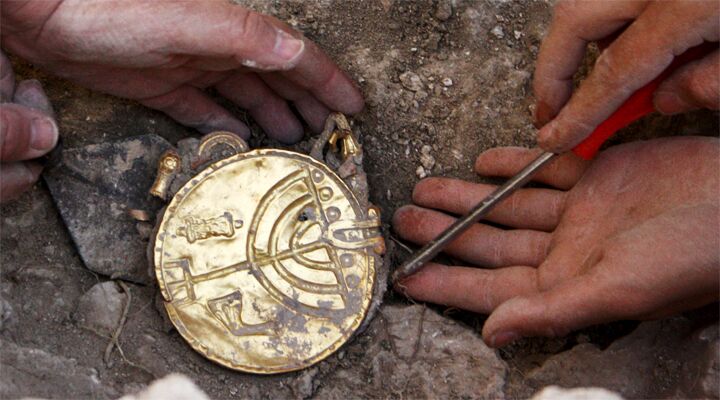 To celebrate the announcement of the menorah medallion, the latest exciting archaeological find in Jerusalem (article, page 2), we’re devoting this entire issue of the Trumpet to recent discoveries in that city. Let me explain why.

I went to Ambassador College in 1967. That was the year the Six-Day War broke out in Israel, in which God intervened miraculously to help Israel win. In that war, Israel gained control of East Jerusalem, uniting the city under Israeli rule.

The very next year, the Israelis began what they called the “Big Dig”—a massive archaeological excavation on the southern part of the Temple Mount directed by Prof. Benjamin Mazar. Soon after, Herbert W. Armstrong formed a partnership with Professor Mazar and Hebrew University to assist with the dig. Within two years, Ambassador College had 78 students over there volunteering, and Professor Mazar was asking Mr. Armstrong to triple that number. (You can read more about this relationship in our article on page 23.)

The October 1971 issue of Tomorrow’s World magazine described this history: “[I]n 1967, after the unification of Jerusalem, the archaeological institutions of Israel began considering the feasibility of a full-scale excavation of the entire Southern Wall area. With encouragement by the mayor of Jerusalem and the Israel Exploration Society, the present ‘Big Dig’ was launched in 1968, headed by Prof. Benjamin Mazar. …

“In the first winter recess, Ambassador College entered into the project jointly with Hebrew University and the Department of Antiquities. Beginning December of 1968, Ambassador began providing financial assistance to put the project on a full-time continuous basis, and in 1969 began to provide summertime student manpower. Work has continued unbroken since that time.”

At the time of that dig, there was a young girl there with her grandfather. She was fascinated by his work, and was also becoming very well acquainted and deeply impressed with Mr. Armstrong and the Ambassador College students. She grew up to be an archaeologist herself. Now she directs what we believe to be the most important archaeological dig in the world!

Eilat Mazar, Benjamin Mazar’s granddaughter, has since told me that her grandfather was very concerned at the beginning about whether or not it was a good idea to get so deeply involved with a Christian organization from the United States. But of course, he soon became very happy that he did.

Dr. Mazar has picked up where her grandfather left off. And today, students from a college named after Herbert W. Armstrong work over there alongside her.

A few years ago while visiting Jerusalem, I was on an elevator on my way to a dinner we were having with Dr. Mazar, and a woman next to me said hello. We spoke briefly, and another man in the elevator could tell I was from the United States. He asked what I was doing in Jerusalem, and I told him about helping with Dr. Mazar’s project. Soon, Benjamin Mazar’s name came up, and the man said, “You are a lucky man, because he was the greatest archaeologist in the world!” That gave me a good story to tell Dr. Mazar when I saw her that evening.

Today, thanks to Eilat Mazar’s continuation of her grandfather’s legacy, we are able to walk around inside the walls of David’s palace and a massive royal complex from the time of his son Solomon. (We talk about these finds on pages 8 and 10 of this issue.)

Another electrifying discovery of Dr. Mazar was identifying part of Nehemiah’s wall. The book of Nehemiah describes how he oversaw the construction of a wall around the city in a very short 52 days. A tower still stands there that most archaeologists believe to be Hasmonean. Dr. Mazar found what she believes is proof showing that it was in fact constructed by Nehemiah. This is a profoundly important discovery adding support to the biblical account (article, page 15).

Many archaeologists use the lack of physical evidence from David’s time and Nehemiah’s day to justify their lack of faith in the Bible. These discoveries should put those doubts to rest—if the scholars would only accept the truth.

Nehemiah’s wall; King David’s palace; Solomon’s wall; biblical seals and inscriptions—these items have already been found, and digging continues! The prospect is high of even greater finds to come.

This is the most exciting archaeological project in the world to be involved in!

I believe what Dr. Mazar is doing will ultimately cause an earthquake in the world of archaeology.

Truly, the work of Eilat Mazar has been blessed in a special way. Is it because she operates on the premise that what the Bible says is actually true? She is truly a rare individual who combines scientific method with a biblical foundation. As she continues to use that formula, we can expect more astounding discoveries to come out of Jerusalem.