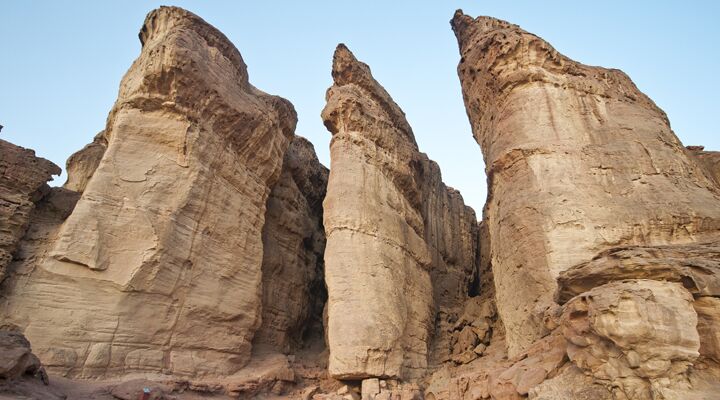 Further evidence of Solomon’s mines (and empire) has surfaced.

Recently unearthed remains of hundreds of copper smelting furnaces and metallic ore residue in Timna Valley of the Arava Desert in Israel provide further scientific evidence of prolific mining activity during the time of King Solomon. The site of the copper mines is known as Slaves’ Hill, and it was excavated by Dr. Ben-Yosef and his team of Tel Aviv University archaeologists, who began work at the site in February.

The evidence from Ben-Yosef’s findings confirms the Bible’s assertions of the wealth and clout of the kingdom of Israel under Solomon.

The mining site was initially argued to have been built by ancient Egyptians three centuries before Solomon’s reign. Archaeologists arrived at this erroneous assertion because of the discovery of an Egyptian temple at the center of the valley in 1969. But tangible evidence from the excavations such as ceramics, clothing, fabrics, ropes and foods like dates, grapes and pistachios were dated at University of Oxford’s radiocarbon accelerator unit to King Solomon’s era in the 10th century b.c.

“The findings at the Slaves’ Hill undermine criticisms of the Bible’s historicity based on a lack of archaeological evidence,” said Dr. Ben-Yosef. “It’s entirely possible that David and Solomon existed and even that they exerted some control over the mines in the Timna Valley at times.”

In 2009, Ben-Yosef worked under Prof. Thomas E. Levy of the University of California-San Diego, who uncovered massive mines that he concluded to be remnants of King Solomon’s mines. Trumpet columnist Robert Morley wrote about that stunning discovery in 2009 and how it flew in the face of Bible scoffers: “As [prominent archaeologist] Dr. Eilat Mazar once said, ‘In the end, the stones will speak for themselves.’ The stones are speaking for themselves! … The detailed accuracy of the Bible is continually being proven correct—word by word, stone by stone, day by day.”

The Bible is a true historical record, and archaeological relics are endorsing it. For more, read Mr. Morley’s article “King Solomon’s Mines—Found!”