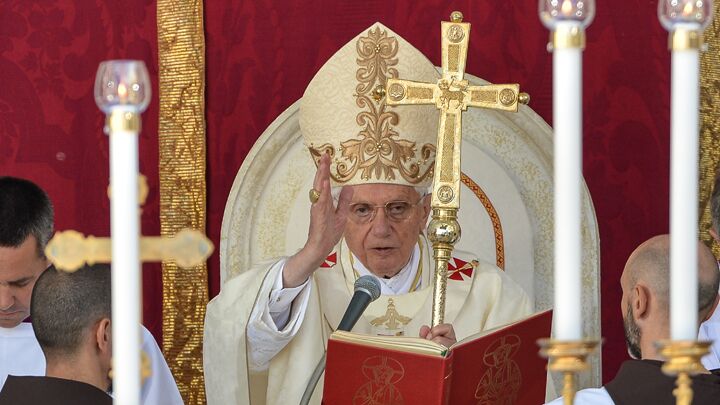 In one of his final papal decrees before resigning, Pope Benedict invoked the term ‘Church of God’ as solely applying to the Roman Church, which he claims is the only true church.

The Vatican news service Chiesa released a report Wednesday that announced a papal edict issued by Pope Benedict, only days prior to his resignation, on a change in the name of the Roman Catholic Church as mentioned in the text for the rite of baptism. Chiesa reported of Benedict that “He wanted ‘Church of God’ to be said instead of ‘Christian community.’ The order to change was issued a few days before his resignation. And it went into effect after the election of Francis” (August 22).

Though the change is only really coming to light now to the eyes of the Catholic public, it was originally published in Notitiae, the official bulletin of the governing body of the Roman Catholic Church, the dicastery, some time back.

What is particularly interesting is Chiesa’s observation that “Its existence was pointed out, amid the silence of the Vatican media, by the newspaper of the Italian episcopal conference, Avvenire.”

Chiesa describes the change in the Roman Catholic baptismal rite that Benedict introduced as follows: “From now on, at the end of the rite of reception, before signing with the cross the forehead of the child or of the children, the priest will no longer say: ‘Magno gaudio communitas christiana te (vos) excipit,’ but instead: ‘Magno gaudio Ecclesia Dei te [Church of God] (vos) excipit.’”

This change in Rome’s baptismal rite places a very definite stamp of papal authority on one of the most stringent claims of Pope Benedict—that the Roman Catholic Church is the sole and original church established by Jesus Christ: “In practice pope Joseph Ratzinger, as a sophisticated theologian, wanted that in the baptismal rite it should be clearly said that it is the Church of God—which subsists fully in the Catholic Church—that receives those who are being baptized, and not generically the ‘Christian community,’ a term that also signifies the individual local communities or non-Catholic confessions, like the Protestants” (ibid).

On July 10, 2007, the Vatican released a statement approved by Pope Benedict which declared that “The Catholic Church is the one, holy, apostolic church of Christ …. It said that the Second Vatican Council was clear in stating that Christ’s church ‘subsists in the Catholic Church, governed by the successor of Peter and the bishops in communion with him.’ That phrase affirms that the ‘historical continuity and the permanence of all the elements instituted by Christ’ are only present in the Catholic Church” (Catholic Online, Oct. 10, 2007).

He placed his imprimatur overtly on the adoption of the term “Church of God” as Rome’s church when, “[On] last January 13, in celebrating baptism for the last time as supreme pontiff, he said: ‘Dear children, with great joy the Church of God welcomes you.’ And shortly afterward, among the last measures of his pontificate, he prescribed this formula for the whole church” (Chiesa, op. cit.).

Does the name “Church of God” truly apply to the Roman Catholic Church?

If it did, then we surely should expect that its doctrines, beliefs, customs, traditions and practices would accord very directly to the New Testament church that Jesus Christ founded in a.d. 31, as recorded in inerrant Scripture.

But they patently don’t!

Take just one example. Jesus Christ and His disciples, upon which foundation the true Church was built, observed the seventh-day Sabbath according to God’s direction in Exodus 20—a perpetual commandment of Almighty God!

The Roman Church observes the pagan day of the sun—Sunday.

That is but one example of a plethora of instances where the Roman Church has changed Jesus Christ’s basic doctrines upon which He raised up the one true Church of God.

Space prevents us from going into more detail on this subject. However, if you are interested in proving just where the true Church of God is today, then read the booklets mentioned below. They will enlighten you as to the fact that the one true Church of God, as originally established by Jesus Christ, is alive and active today, pursuing the very work that He set it up to do! (John 5:17).

Read our booklets Does God Exist? and the Proof of the Bible. They are wonderful primers for Herbert Armstrong’s book Mystery of the Ages. The latter gives a history of God’s plan for humankind including a whole chapter on the mystery of the Church. It’s eye opening in its revelation of the true history of the Church—the true Church of God!