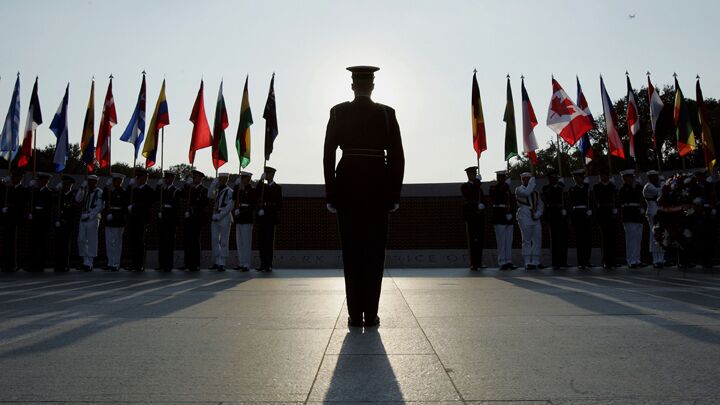 America has always tended to shy away from conflict—even if it means ignoring facts.

From the July 2004 Trumpet Print Edition

In the shadow of the Washington Monument now stands a memorial for the veterans of the Second World War. The weekend in May it was being dedicated, I was glad to be in Washington d.c. among the swarm of elderly men who came to recall the sacrifices they and their friends had made 60 years ago—and moved as they teared up while reflecting on the tribute that had been erected to them.

But I must say, it was peculiar seeing this unabashed celebration of a wartime America, given the current swell of antiwar sentiment in the country.

One woman, visiting with her wwii veteran husband and eager to see the Winston Churchill exhibition at the Library of Congress, strongly condemned the war the U.S. is fighting today. “I just don’t see what the point of our being in Iraq is,” she told me sternly. In one of the World War ii Reunion tents, cbs’s Mike Wallace contrasted the 1940s war in which he served with the conflict today: “We knew what we were fighting for. We knew how important it was. We loved our country. We loved our commander in chief,” he said. “[I]t was a d—n good thing that we did.” But then his tone changed: “I look at where we are today, and I say to myself … this is not, in my estimation, a good war.” That comment got applause from several in the audience.

Truly, today’s war is different from past wars in many ways, but in one key respect it is the same: A very loud and influential segment of Americans has always been loath to fight—even if that has meant ignoring reality.

After the United States secured its independence from Great Britain, the Founders were determined to stay as clean from Europe as possible. The Atlantic served as a giant moat for America’s castle and helped preserve this policy for over a century.

In the thick of World War i, Woodrow Wilson’s America did all it could to avoid the war—remaining neutral even in the face of an exposed German plan to help Mexico reconquer Texas, New Mexico and Arizona, and the sinking of several American ships by German subs. As late as January 1917 Wilson was saying, “There will be no war. It would be a crime against civilization for us to go in.” It was only after months of ongoing provocations that he came to consider the luxury of isolationism too costly.

However, just a few years after the war ended, the U.S. began a massive naval disarmament. “It was argued in odd logic that it would be immoral to disarm the vanquished unless the victors also stripped themselves of their weapons,” Churchill wrote in his Memoirs of the Second World War. The idea sounds noble and virtuous—trouble is, it’s also frighteningly naive and reckless.

Churchill labeled World War ii “The Unnecessary War,” simply because action could have been taken at virtually any time over a decade to prevent Germany from gaining enough strength to pose a threat. Even as Hitler rebuilt the German war machine—even after the true evil of his intentions was exposed by Kristallnacht and the institution of Dachau and the Gestapo—American intellectuals (not to mention British) wanted to stay out of Europe’s issues. They were plagued by a distaste for unpleasant realities—addled by a head-in-the-sand defeatism that masqueraded as a level-headed love for peace. Churchill was actually flooded with relief when Japan attacked Pearl Harbor, because nothing short of that nightmare was able to provoke the U.S. into the fight.

Still, there is a heroic aura surrounding World War ii—Mike Wallace can see that. After all, what would have happened if the U.S. had stayed out even longer? But however fervent America’s pacifist tendencies were at that time, Korea, Vietnam and a collection of more morally ambiguous conflicts the U.S. has fought since, including Iraq, have had a poisonous effect on America’s national morale in a crisis. The pacifism has become more adamant—and even more heedless of facts.

No great power in history has displayed the self-loathing America does today. The government is trying to protect the nation’s interests, trying to eliminate its enemies, trying to prevent further tragedies. And for doing so imperfectly, it faces the incessant, self-righteous hand-wringing of the antiwar intellectuals. Considering themselves duty-bound by patriotism, they obsess over anything that demonstrates our incompetence: intelligence failures, Abu Ghraib, the Saddam-al Qaeda link, the 9/11 Commission. In their pursuit of the “facts,” these patriots are ignoring the truly unpleasant realities facing the country and guaranteeing the failure of any future administration to be able to manage them.

And the most unpleasant reality of all has yet to be confronted. As this Trumpet issue shows, Islamist radicals do not pose the chief threat to America. The dominant danger is going to come from the very source from which this nation has always wanted to distance itself.

Truth is, America is about to fall prey to its own rose-colored romance with peace. In Isaiah 56, God condemns its watchmen: “[T]hey are all ignorant, they are all dumb dogs, they cannot bark; sleeping, lying down, loving to slumber” (verse 10). While the threats gather, the watchmen sleep. And Bible prophecy shows there is about to be a Pearl Harbor we won’t recover from.

We at the Trumpet must get a message out—we must bark! That means embracing reality, no matter how unpleasant. It takes courage to face the truth—but it is only the truth that will set us free.