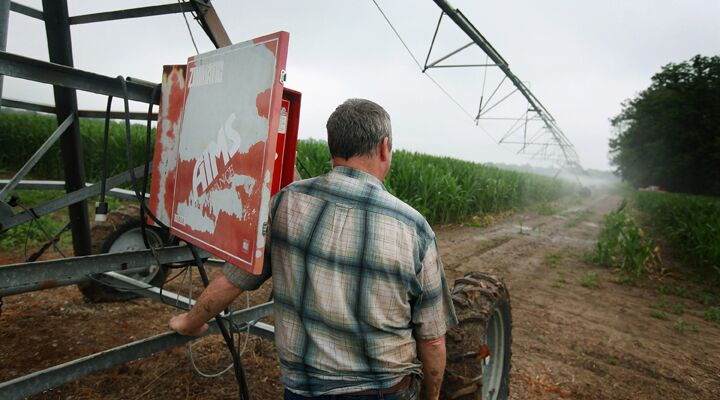 ‘In less than 100 years we are seriously depleting what took nature more than 10,000 years to fill.’

Imagine a man who unexpectedly inherits a large, shiny pickup truck with a full tank of gas. It’s an antique model, but he can see that it was purchased from a dealership, driven straight home and then just parked for many years. He drives it around at breakneck speeds, accomplishes many things with it and makes plans to accomplish many more. But within a few days the truck’s enormous fuel tank is empty. When the man tries to fill it up, he’s shocked to learn that on that particular model, the fuel tank can only be filled up with a tiny eyedropper—a task that would take years to complete. So much for his plans.

The man represents the people of the United States. The truck symbolizes the stretch of American land known as the Great Plains. And the fuel tank is the Ogallala Aquifer that lies beneath that land.

The Ogallala is the largest known body of freshwater on Earth. It sits beneath parts of Colorado, Wyoming, Kansas, Oklahoma, Texas, New Mexico, Nebraska and South Dakota. And unlike most other unconfined aquifers, it refills with water at an incredibly slow speed.

Geologists studying its trickling recharge rate believe that the Ogallala is filled mostly with ancient paleowater—dating back to the most recent ice age or even earlier. Based on their observations, at present rates of water flow it would have taken the aquifer at least 10,000 years to fill up, and probably much longer. At its peak, the aquifer’s size grew to a staggering 174,000 square miles.

Turning the Sahara Into a Rice Paddy

Meanwhile, above ground, the situation was exactly the opposite. In the early 1800s, a government surveyor charged with mapping the territory America had acquired in the Louisiana Purchase said this about the Great Plains on top of the Ogallala: “I do not hesitate in giving the opinion that it is almost wholly unfit for cultivation, and of course, uninhabitable by a people depending upon agriculture for their subsistence.” He went on to call the area “the Great American Desert.”

Some farmers ignored such assessments, but they suffered frequent crop failures because of relentless cycles of drought, which culminated in the devastating Dust Bowl of the 1930s. Then, around 65 years ago, a Colorado farmer invented center-pivot irrigation, and landowners across the region waged war against the climate. The cry went up defiantly: No more will our crops be subject to nature’s fickleness and its unreliable rains. We have out-engineered it!

Farmers began using the new technology to tap the Ogallala on a large scale. They pulled its water to the surface and showered great swaths of terrain several times a week. Millions of acres were rapidly transformed from “the Great American Desert” into seas of lush, hydro-intensive crops like soybeans, corn, sugar beats, cotton and wheat—crops that would never thrive in the natural climate. The Great Plains became one of the most consistently productive agricultural regions in the world. The sheer magnitude of this irrigation project would be outdone only by something like converting the Sahara into a massive grid of rice paddies.

But the practice came at great cost to the Ogallala. In 1940, the aquifer’s average depth was about 240 feet. Today, its average is 80 feet. In many areas, the water is entirely gone. “[I]n less than 100 years we are seriously depleting what took nature more than 10,000 years to fill,” said Marcia McNutt, director of the U.S. Geological Survey.

David Brauer of the U.S. Department of Agriculture’s Ogallala research program is working to implement measures to reduce dependence on the aquifer, but says they are “mostly designed to delay the inevitable since the recharge rate for the Ogallala Aquifer is small enough to be considered negligible.”

Can We Dominate Nature?

Modern irrigation techniques and other technologies have convinced many that people can control nature. Thanks in large part to water pumped up from the massive aquifer, America exports more food than any other nation. But less than 100 years after tapping it, parts of the Great Plains have become “Great American Desert” land again.

People are mostly unwilling to accept the fact that, in spite of our technological developments, we are still vulnerable. The idea of moderation is as incompatible with the 21st-century U.S. as hydro-intensive crops are to the natural Great Plains climate. The data shows that current practices cannot be sustained, yet America’s foot remains heavy on the gas pedal, draining this massive fuel tank at a rate of 800 gallons per minute.

Some 3,500 years ago, God promised that the ancient tribe of Manasseh would grow to become an astoundingly powerful nation (Genesis 48:14-22; 49:22-24). God fulfilled this promise spectacularly in the 19th and 20th centuries when the United States of America (Manasseh’s descendants) attained towering cultural might, unparalleled military power and mind-boggling economic strength. But God said that if America rejected Him and His law, then the nation’s prosperity would not last very long (Leviticus 26:14-20; Micah 5:10-15).

The Ogallala Aquifer has been an instrumental component of the prosperity the U.S. was showered with. But America has rejected God. The blessings are evaporating and the era of prosperity is approaching its end. The Ogallala now takes its place alongside the U.S.’s manufacturing sector, its will to use its power, the health of its families, its overseas influence, its weather stability and its respect for the Constitution and for law. All are drying up fast.

America’s decline is sobering beyond words, but the Bible makes clear that it will lead directly to the most radiant future imaginable. If you want to understand the reason why the U.S.’s blessings are draining away and where it is ultimately leading, read The United States and Britain in Prophecy.