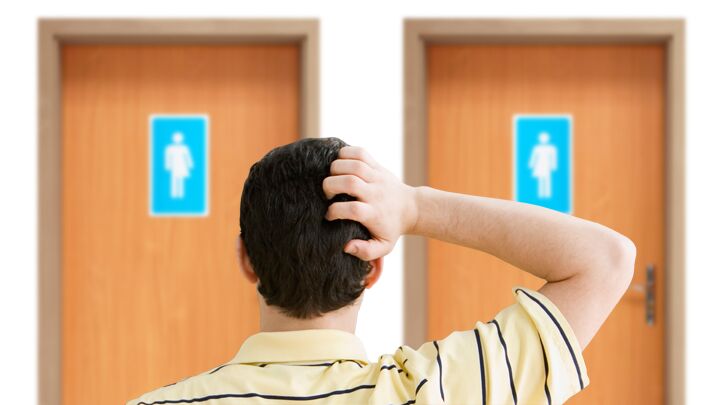 The public now accepts homosexuality and same-sex “marriage.” But the fight is not over. The offensive to reshape society in even more radical ways pushes forward.

An effort is gaining ground to create a world where not just “sexual orientation,” but sex itself, is a choice. Where boys can be girls and girls can be boys, or something in between. Where people are expected to ignore the biological reality of sex so that all people coexist androgynously, or according to whatever gender suits them at the moment. Where everyone pretends that gender confusion is normal, if not desirable, and anyone who doesn’t play along can be punished and silenced.

Boys in the Girls’ Room

Think of the implications with respect to public bathrooms, sex-segregated activities, locker rooms, college student housing and countless other areas of human interaction.

Does the idea of a boy who thinks he’s a girl showering next to your daughter in P.E. class make you uncomfortable? Then you’d better brace yourself. This cause is winning critical legal battles—and it is starting with our youth.

In July, the California Senate passed a bill saying that throughout K-12 education, a student is “permitted to participate in sex-segregated school programs and activities, including athletic teams and competitions, and use facilities [e.g. bathrooms, locker rooms] consistent with his or her gender identity, irrespective of the gender listed on the pupil’s records.” “Gender identity” is the terminology these ultrasensitive, morally sophisticated lawmakers use to refer to the sex a person happens to identify with.

In June, a Colorado governing body ruled that a 6-year-old boy who thinks he’s a girl has the right to use the girl’s bathroom at his elementary school. The Colorado Division of Civil Rights said denying him that right “creates an environment rife with harassment” and is akin to racial segregation.

See where this is going? The public majority already agrees that denying same-sex couples the right to “marry” is exactly like prohibiting interracial marriage. Now, denying someone access to a public bathroom on the basis of biology is just like excluding blacks from white-only facilities.

These lawmakers and officials are determined to ensure that these children grow up in a world where sex confusion is welcomed, even encouraged.

What about the girl who feels awkward about having a boy walk in while she’s using the bathroom? Sorry. She is the one who needs to adjust her thinking—not the boy.

This is actually being promoted within our children’s education. Our sons and daughters are learning doubt about sexual matters. Teachers and administrators are implanting and fostering this confusion, and it is occupying more and more of our young people’s thinking. Misguided radical social engineers enthusiastically treat this like it’s the brave new front in civil rights and societal progress. And with coaching from these radicals, youths predisposed to question and reject authority are starting to view their own sex at birth as something “imposed” on them, and any social pressure to conform to it as a form of oppression.

“A new generation of young people is challenging our understanding of gender,” intoned National Public Radio in a July 16 report. (Speak for yourself, npr.) “They’re calling for more fluid categories, beyond just male and female.”

Beyond male and female. Within the politically correct cocoon of academia, students in many colleges and even high schools are so diligent to accommodate gender-confused people that they introduce themselves with their “pgps“—preferred gender pronouns. As in, “My name is Stacey and my pgps are he, him and his.” As in, Today, I would like to be identified as a male. These youths insist not only that whether their “emotional gender identity” aligns with biological reality is entirely a matter of choice, but also that everyone else needs to pretend this is perfectly sane.

These students “are going way beyond transgender,” npr reported. “They are arguing for a world beyond the gender binary.” In other words, not only is gender a choice, it is a spectrum. Even pronouns like he and she, they view as confining and unnecessary.

Lynn Walker, a director at a housing organization that caters to many transgenders, told npr, “We encountered high school students who said, I want you to call me ‘tractor,’ and use pronouns like ze, zim and zer. And in fact I reject the gender binary as an oppressive move by the dominant culture.”

Behold the product of our public schools: Students who are convinced that male and female—basic biology—is tantamount to tyranny that must be overthrown.

This is America’s up-and-coming generation of voters and lawmakers. This is a glimpse at where our world is headed.

We are looking at the next “logical” step in society’s wholesale departure from the understanding of masculinity and femininity. Though the concept of your sex having a bearing on your role in society and within a family has dominated human relations for humankind’s entire history, we are now throwing it out as if the facts are subjective. Today it is viewed with contempt. Now, it’s not just roles we reject, but biological absolutes. Everything is relative. Anything is respectable. Nothing is deviant.

Play Along, or Else

At present, in many circles the world remains a fairly hostile place for gender-confused individuals. But society is changing—fast. On July 15, Slate featured a photo blog of a camp for “gender nonconforming” boys. There young boys dress like girls and women, apply make-up, and walk a fashion runway to the cheers of their parents. Such examples are increasingly appearing in the national spotlight—to the cheers of the mainstream press.

Those boys are part of a generation that is receiving the message that it’s not they who must change, but everyone else. And they are gaining the advocacy of lawmakers who are determined to force the world to embrace their behavior.

On the surface, preventing society from badgering poor, gender-confused people may sound like a worthy goal. But this cure is far worse than the disease. Rather than helping people overcome thoughts and tendencies that lead to self-destructive, depressive, anti-social behavior, the transgender crusade encourages and inflames them—and demands that everyone else play along.

Hate crime laws increase penalties on criminals who are deemed to have been motivated by animus against a protected class. In 2009, the U.S. government expanded protected classes to include “sexual orientation” and “gender identity.” Anti-discrimination laws based on sexual orientation and/or “identity” exist in 21 states and more than 140 cities and counties. Illegal discrimination includes anything perceived as different treatment because of behavior perceived as not stereotypically male or female.

Ripple effects from these laws are enormous, and already spreading. Universities nationwide are hosting gender-neutral student housing, bathrooms and locker rooms. Transgender law advocates are pushing for health insurance plans to include hormones and sex-reassignment surgery. In June, the Social Security Administration changed its policy for those who want to switch gender on their Social Security card, removing the requirement of sex-reassignment surgery. After victories in California and Colorado, efforts to open public toilet facilities and locker rooms to transgenders continue. Thus, to protect the right of a man who says he feels more comfortable as a woman, the law is preparing to trample on the right of women who feel more comfortable in public bathrooms devoid of perverted men.

That is the truth of the matter. These social engineers want you to think their cause is all about inclusion and tolerance. But if you disagree with them, they have no tolerance for you. The push for transgender rights is a religious mission, aimed at converting the hearts of men. Its missionaries want the nation to repent of its archaic attachment to the traditional family, and to become devotees to the cross-dressing, bisexual, homosexual cause. The only victory is complete victory. Until transgender crusaders achieve this utterly impossible goal—every individual a true believer—they will continue their battle, using every tool of coercion they can summon.

Today, the lgbt life is relentlessly promoted as happy and bright, free of shadows—and without consequences. Mainstream media and politicians ignore its darker side—the diseases, the guilty consciences, the family breakdown.

While a minority still condemns it, the typical “conservative” opinion has become indifferent. As long as it doesn’t affect me, let them do what they want, people say.

But how can anyone look at what is happening in society today and still claim that homosexual-related behavior doesn’t affect those who disagree with it? When it fills our television screen and movie theaters—when it infiltrates our public school curricula, being taught even to elementary school children—when public discussion increasingly ridicules and bullies anyone who isn’t vociferously supportive of it—when judges overturn publicly approved measures to safeguard traditional family—when public policy punishes people who voice their disapproval or act on their conscience based on biblical standards? How can anyone sincerely continue to insist that this is a strictly private matter—so just mind your own business and keep your mouth shut?

They cannot. This issue affects everyone.

Our society has transformed into an immoral “do your own thing” world that tolerates and accepts anything and everything. It is just as it was in Israel during the cursed and bloody period of the Judges, when “every man did that which was right in his own eyes” (Judges 17:6; 21:25). People pompously promote and push a way of life that ignores, insults, challenges and defies God in so many ways.

Our Creator made two sexes—male and female—not a gender spectrum (Genesis 1:27; Matthew 19:4). In Scripture God strongly differentiates between the two, in what He expects in dress, hair length and appearance (e.g. Deuteronomy 22:5; 1 Corinthians 11:14-15). (Deuteronomy 22:5 specifically, directly forbids precisely what parents, policymakers and the media are applauding in our youth. It is a law by which God intended to accentuate and preserve the differences between the sexes. Problems are proliferating in society today because we ignore this law!)

God also makes dramatic distinctions in the roles men and women should fulfill within family and society (e.g. Genesis 2:18; Ephesians 5:29-33; 1 Timothy 5:8). He created male and female for a reason. Do you know that reason? “Gender spectrum” talk reveals complete ignorance of it. But it is a wonderful subject to study—because it radiates with spiritual significance and beauty!