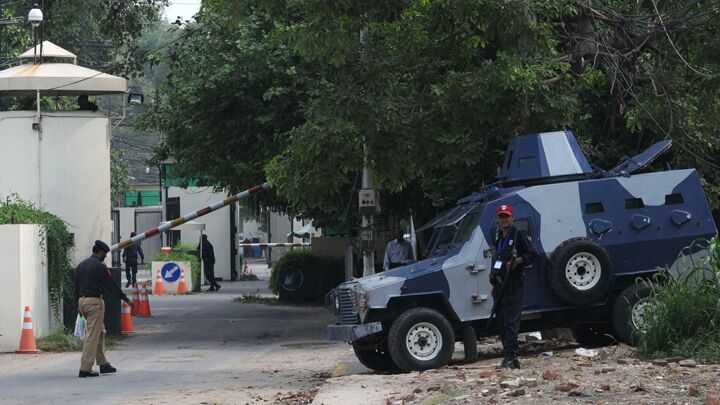 The creation of fear in the enemy camp is a potent weapon of Islamist terror. America has succumbed to this tactic.

Over the weekend I started to pen this article, under the headline above, motivated by a mixture of indignation, shame and real anger. I stopped writing halfway through as I thought my mood might unduly affect my writing.

Then I noticed that at least one commentator had the fortitude to observe the overarching truth about the American administration’s reaction to current fears of terror attack on its embassies and consulates.

U.S. Congressman Louie Gohmert hit the button right on the head when he inferred that an appropriate showing of force at embassy sites under threat means that “‘you don’t have to close your embassies like a bunch of cowards that go running away’ …. Gohmert said the U.S. should have held its ground and warned that Obama’s actions might actually invite an attack, as he recalled former President Bill Clinton’s failure to take action after U.S. Embassy bombings during his term” (Newsmax, August 5).

Having noted the congressman’s courageous words, I decided, in a calmer—yet no less indignant—mood, to proceed to highlight Washington’s shameful reaction to this threat, and its profound prophetic connection as propounded by our editor in chief, Gerald Flurry.

In an unbelievably cowardly reaction, the U.S. government closed its embassies and consulates in Mideast and North African Muslim countries over the weekend based on the fear of imminent attack by al Qaeda.

An Associated Press report indicated that “State Department officials said Thursday that they were taking action out of an ‘abundance of caution’” (August 1).

Can you believe this?

The country that almost 70 years ago took the fight to the enemy in two great theaters of action—Europe and the Pacific—and with the help of Allied support vanquished the threat of tyrannical rule over the planet, now shuts its embassies and consulates based on an “unspecified fear” out of a declared “abundance of caution”!

What a cowardly signal to send to our enemies!

The State Department’s decision to shut the offices of its diplomatic representatives effectively meant a worldwide shutdown on Sunday due to U.S. embassies and consulates normally closing on Sundays in non-Muslim countries.

In better days under a far, far better administration than that of today, President Teddy Roosevelt proclaimed: “The things that will destroy America are prosperity-at-any-price, peace-at-any-price, safety-first instead of duty-first, the love of soft living, and the get-rich-quick theory of life.”

The current American administration has shown that it has descended to a cowardly “safety-first instead of duty-first” diplomacy by its closure of the offices of its overseas representatives under the mere “threat” of attack.

The embassies of the United States are considered U.S. territory in any foreign country. By the closure of its embassies and consulates in the Middle East and North Africa, Washington is sending a very clear signal of capitulation to fear under enemy threat, instead of a courageous willingness to defend its diplomatic territory at all costs.

This latest fearful reaction by the U.S. administration is sending a very clear signal of American weakness to all its enemies. We shall rue the day this cowardly decision was made and acted upon.

Congress itself has sent a signal to the world that it now supports a foreign policy of “safety-first instead of duty-first.” The Washington Post reported, “Rattled lawmakers in both parties applauded President Obama’s decision to shutter two dozen U.S. diplomatic posts across the Middle East and North Africa this weekend, calling the threat of a fresh terrorist attack credible, specific and the most alarming in years” (August 4).

The intriguing thing about all this is that the closures were made apparently without any knowledge of any specifics concerning any terror attack. The Post referred to the closures resulting from “warnings of a possible terrorist plot” (ibid).

So we now cut and run at the merest hint of a possible terrorist attack?

Time was when gunboat diplomacy was a very real tool in the Anglo-Saxons foreign-policy kit.

All that Britain or America had to do if threatened by an enemy nation was roll up to its door with a show of force and point their guns in that direction.

The plain fact is, if a nation is going to reject its God, the only human way to put the enemy to the chase is by a show of superior physical force.

Yet, full well the prophecy has come to pass that we have lost the pride in our power. In losing that pride we have simply lost the political will to face down our enemy.

The most timely prophecies that are being fulfilled by the closure of U.S. diplomatic offices in the wake of this “possible terrorist plot,” though inspired millennia ago, leap now into clear focus as the Anglo-Saxon nations increasingly live them out at this very moment.

The Eternal God, creator of humankind, prophesied specifically of the Anglo-Saxon nations and their natural ethnic affiliate allies that if they rejected their God, He would “appoint over you terror …. [A]nd ye shall flee when none pursueth you. … I will break the pride of your power” (Leviticus 26:14-19).

The Creator also prophesied that, due to national rebellion against God, He would “cause thee to be smitten before thine enemies: thou shalt go out one way against them, and flee seven ways before them: and shall be removed into all the kingdoms of the earth” (Deuteronomy 28:25).

Yes, the final result of cowardly diplomacy is slavery under the enemy boot heel!

Iran and terrorists are preying on our weakness. State-sponsored terrorism exists because of our weakness!But even if we don’t change our evil ways, this is all leading directly to the return of Jesus Christ. That is the best possible news this world could ever hear! This evil world of terrorism and war is about to end forever. It will soon be replaced by a world full of prosperity and peace. Then all mankind will understand and be fulfilling their incredible human potential.

Pray God He hastens that day!

Read The United States and Britain in Prophecy and The King of the South for urgent insight into these prophecies of the moment.