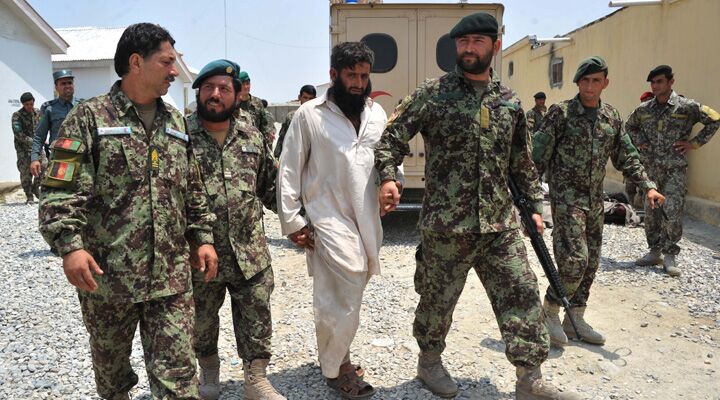 Islamic extremism is spreading rapidly in Central Asia in the wake of a crisis in governance. Where is it leading?

Islam is not only a religion. It is a political movement. It’s a movement that is gathering strength rapidly in one of the most strategic regions of the world—Central Asia.

If one looks at a map of Central Asia, its strategic importance—politically, militarily, economically—particularly in respect of the Silk Road rail link from China to the industrial heartland of Germany, and especially in respect of oil politics—becomes immediately obvious.

Most particularly, this applies to Europe, Russia and China, three of the regions vying to fill the trade, political and security vacuum increasingly being left behind in the wake of the descent of the Anglo-Saxon societies. This relates especially to the drawdown of the U.S. military presence from theaters in proximity to Central Asia.

A study by the Swiss-based think tank International Relations and Security Network highlights this.

In a recent paper, analyst Dr. Arne Seifert of the center for Organization for Security and Cooperation in Europe (osce), headquartered in Vienna, observes that political Islam in Central Asia poses a danger to peace due to the lack of any moderate counterweight to Islamist extremism.

Seifert argues that a catalyst to potential conflict in Central Asia is the impending withdrawal of the U.S. military forces from Afghanistan.

Pointing to past history, Dr. Seifert fears a repetition of extremist groups such as the Taliban rising to dominate northern Central Asia. He observes: “The question of what security-policy repercussions will result from the gradual transfer of political and military responsibility to the Afghan authorities from 2011, concerns foreign-policy circles in the Central Asian states neighboring Afghanistan. Above all, they are worried about the consequences this could have for the power relationship between the Taliban and Tajik, Uzbek and other national groups in the north of Afghanistan and about which of them will gain the upper hand in the north. It has not been forgotten that the Taliban were once in power there from 1996/97 until 2001” (“Political Islam in Central Asia—Opponent or Democratic Partner?,” August 2).

There can be no doubt that this is a legitimate concern for those continuing to seek stabilization of post-Soviet Central Asia.

Taking note of current societal tensions within the region, Seifert states that, “considering the high backlog of socioeconomic and political problems in these countries, one must take into account that they can fall back on a significant mobilization potential in the Muslim-majority population. That this underground is aiming at a violent change in the power relationships is sufficiently known. Renewed domination by the Taliban in Afghanistan—even if it is only in the northern part of the country—could contribute to its mobilization” (ibid; emphasis added).

This is a major reason why we have consistently maintained that Germany cannot afford to withdraw its military presence from Afghanistan. As America has increasingly drawn down its military assets in the European, Middle Eastern and Central Asian regions, Germany has quietly—almost surreptitiously—established an increasing presence in the vacuum thus created.

The maintenance of a military presence by Germany in Afghanistan is crucial to its imperialist policy for expansion of the developing European Union empire it heads. Opponents of this view walk by sight alone, observing the relative smallness of Germany’s military forces in this region. They forget the speed with which Germany previously mobilized in an era without today’s instant satellite-driven communications, without refined, computerized industrial capacity, nor with all of Europe under its financial and economic domination.

Once having established a base of operations in a region of interest and planned with real foresight for expansion, it can be but a simple logistical exercise to boost military capacity almost overnight, especially given the organizational expertise of the Teutonic mind.

Those who walk by sight in observing these developments are not aware of the prophecy contained in 1 Thessalonians 5:3: “For when they shall say, Peace and safety; then sudden destruction cometh upon them, as travail upon a woman with child; and they shall not escape.” German elites have been careful to ensure that any publicity given to the overseas expansion of the nation’s military presence always bills it as part of its “peace missions.”

Our editor in chief, Gerald Flurry, has previously demonstrated how since reunification, Germany has strategically positioned itself around its chief Islamic enemy—Iran—and the plumb in its Middle East foreign policy—Jerusalem.

As inferred earlier, control of Central Asia is crucial to the aims of not only a reviving imperialist Russia and an increasingly expansionist China, but, most especially, to a resurrecting Holy Roman Germanic imperial Europe.

In this respect, Dr. Seifert further notes that instability caused by the radicalization of Islamic Central Asia poses a particular challenge for the EU. “In a broader perspective, it matters that the ‘Euro-Atlantic and Eurasian Security Community,’ which was declared for the first time at the December 2010 osce Summit, cannot be realized as long as we do not succeed in upgrading the relationship to the ‘Islamic factor’ politically …. This is particularly the case for the critical space of the Caucasus, the Caspian Basin and Central Asia” (ibid).

But, with that challenge comes an opportunity.

Seifert observes, “This challenge could bring together all those powers who are interested in maintaining stability in the Eurasian space: secular and reformist Islamic powers in the region, the European body politic in general and especially the osce as the only comprehensive Eurasian organization for security and cooperation.”

That’s a classic Teutonic approach. Use the problem to create the opportunity to impose upon it the German elites’ imperial solution.

One intriguing aspect of the founding of the Organization for Security Cooperation in Europe is that the Vatican diplomat Cardinal Agostino Casaroli was chairman of the final stage of the founding conference of the body in 1975. Agostino was the Vatican secretary of state during much of Pope John Paul ii’s papacy, overseeing Vatican state matters during the crucial time of the implosion of the Soviet Union and reunification of Germany. Thus the osce, described by Dr. Seifert as “the only comprehensive Eurasian organization for security and cooperation,” had “Holy Roman” oversight from its beginning.

But why would the osce be so concerned about influencing the situation in Central Asia?

EU elites’ concerns about Central Asia once again lead us to refer to that ageless prophecy which declares that the final resurrection of the Holy Roman Empire will impose its presence by moving hegemonically south and east (Daniel 8:9).

The need to cooperate to find a solution to Central Asian destabilization will inevitably draw the foreign policies of Russia, China and Germany toward temporary consensus in imposing a solution acceptable to each.

But, of all three, the Caucasian Basin is especially crucial to Germany. That nation needs an alternative source of energy to enable it to be far less dependent upon Russian supply of oil and gas. On the other hand, Russia, given its vast territory, does not need the distraction of a radically Islamicized Central Asia. Its own negative experiences in Afghanistan are still too fresh in its mind.

Concerning the expansion of Islam, as with the case of Roman Catholicism, it has its greatest appeal today among the youth.

By comparison, with respect to the influence of Islam on Central Asian youth, Seifert quotes research from a Russian study of Kazakhstan: “A growing number of not-yet ideologically consolidated youth and schoolchildren fall under the influence of preachers of a fundamentalist Islam,” the study said. “Within a foreseeable time, this can lead to the alienation of segments of the economic and politically important population potential of Kazakhstan and to the creation of a new generation of religious fanatics.”

Similar to Europe, youth unemployment in Central Asia is becoming endemic to today’s economic and social conditions. The youth unemployment rate in most of the Central Asian states is comparable to that of Spain and Greece—over 20 percent. Dr. Seifert notes that prevailing conditions of social dislocation such as obtain in Central Asia have “moved significant segments of the population to seek refuge in particular [Islamic] traditional structures, which are the only ones that still offer the ordinary population a certain degree of social security, personal honor and dignity. … Integral components of these structures are madrases, private Koran schools and other questionable forms of providing an Islamic education.”

Dr. Seifert speaks of the need for an effective counterweight to the spread of Islamic extremism in Central Asia.

The most obvious counterweight to the spread of Islamic extremism in Central Asia is Turkey. This is why the European Union has played cat and mouse with Ankara over the decades that nation has sought EU membership. Pope Benedict was adamant that the EU remain a Catholic club and gave no hope to Turkish aspirations to become an EU member. In fact, as he mused in his infamous Regensburg speech, he sees Islam as the enemy of “Christian” Europe.

Notwithstanding the Vatican’s stance, political Europe—especially Germany, its dominant EU member nation—realizes that good relations with Turkey—Germany’s World War i ally—are most necessary for the Anatolian Peninsula to be effectively used as a buffer between the spread of radical Islam northward and the realization of its imperialist goals.

So, what to watch for in Central Asia?

Watch for Germany, Russia and China to embrace a common policy to contain the expansion of Islamism.

Watch for Berlin and Ankara to step up their security and defense cooperation.

Watch for the rise of a religiously and politically based pan-European youth movement, under the combined ideological influence of Rome’s religion, Berlin’s nationalism, and the umbrella of the EU flag. Such an organized youth movement would serve two purposes—occupy the time of unemployed youth, and counter any appeal to youth that Islamic extremism may seek to expand into Europe from Central Asia.

Watch for rising Islamic extremism in Central Asia to provide a heightened catalyst to the reorganization of the European Union into a more united, aggressively militaristic, leaner and meaner 10-nation bloc yielding its power to Rome, ideologically, and to Berlin for its security and defense (Revelation 17:9-13).

Finally, as you watch, realize the powerful sign that these current events witness to the imminent fulfillment of the great prophecy in Revelation 17:14: “These shall make war with the Lamb, and the Lamb shall overcome them: for he is Lord of lords, and King of kings: and they that are with him are called, and chosen, and faithful.”