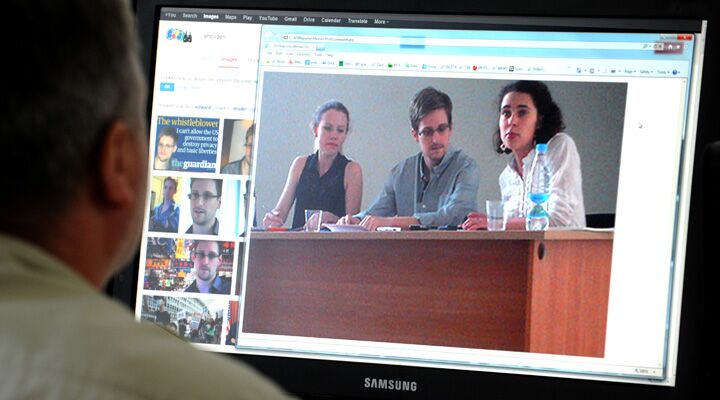 Though the Edward Snowden affair lifted the lid on the total surveillance of American citizens, we still tend to ignore the greatest of all sources of mass intelligence.

The Edward Snowden affair unleashed a great brouhaha in the press and mass media decrying the fact that the U.S. government was spying en masse on its own citizens.

Spying is at least as old an art as the first recorded episode in the biblical book of Joshua where we read that “Joshua the son of Nun sent out of Shittim two men to spy secretly” (Joshua 2:2). That was around 1450 b.c.

Some even claim an older genesis to the art of spying. “Intelligence is actually the oldest profession around …. Cain killed Abel, striking unexpectedly. From that moment on, humans watched and waited, trying to figure out from where the next threat—or opportunity—would come” (The Intelligence Edge, Friedman, Friedman, Chapman and Baker).

During the Carter administration, the cia even produced a study titled “A Bible Lesson on Spying.” The study was published in the Winter 1978 edition of Studies in Intelligence, the agency’s classified spy journal.

The computer age really opened up a new world to the spy. From the time of the cracking of the Nazi Enigma code by use of one of the earliest computer devices, to today’s gathering, storage and analysis of massive amounts of information by such methods as prism and Tempora—recently publicized in the wake of the media coverage given ex-National Security Association employee Edward Snowden—spying has taken on new meaning.

In the 21st century, the computerized mustering of intelligence has led to such a flood of information that it is literally impossible under present constraints to put it all to effective use. Hence the need for both corporate and government enterprises—as the Stratfor authors of The Intelligence Edge point out—to “engage specialists to organize, control, manipulate, and exploit all of the information available and turn it into useful knowledge.”

The Snowden case simply demonstrates that, in the process of pursuing such a gigantic task, the risk of information gained by any organization being misused by an operative who breaks traditional codes of silence and exposes secret information to the public, is dramatically heightened. The more people it takes to manage information, the greater the risk of a leak.

International spying, by its very nature, involves deceit, blackmail, sleight of hand and plainly illegal acts. To the educated, then, the Snowden “expose,” the spahskandal as it is termed in Germany, comes as no real surprise. The spahskandal is the stuff for another Web analysis, which we will post in the coming days.

Though the press and mass media have had a field day with the Snowden story and politicians in Washington express “outrage,” the facts are clear. It’s not that a nation spying on its own citizens is anything new. It’s just that the technology at any government’s disposal these days enables surveillance to be carried out en masse and into the very minutiae of a person’s daily life—“total surveillance.”

The main problem here is the use—or misuse—that such intelligence can be put to by a nation’s government. The potential for abuse of this privilege of clandestine mass gathering of intelligence by any government is enormous. That’s the main worry in any nation run by radicals that seek to change the very nature of its foundational constitution.

Consider the case in respect of U.S. citizenry.

Intelligence gained by “total surveillance” methods holds the potential to give any radical administration intent on pushing an agenda that works to the destruction of the moral core of a nation the power to identify any person out of step with its agenda and to then work to destroy his credibility.

There’s a clear-cut prophecy in the book of Amos, chapter 6, that has a latter-day application in this sense.

Our editor in chief comments on this prophecy in our booklet The Lion Has Roared: “‘But, behold, I will raise up against you a nation, O house of Israel, saith the Lord the God of hosts; and they shall afflict you from the entering in of Hamath unto the river of the wilderness’ (verse 14). The chronology is about serious problems (verse 6), nuclear attack (verses 8-10), after which armies come in to oppress. The Anchor Bible Commentary says: ‘The language used in Amos 6:14 points to a beginning …. If not events already in train [or already occurring].’ There is no invasion described, only a nuclear attack and then an army moving in to oppress.”

This is not a popular message. Far from it.

Yet that’s the message that God prophesies must be delivered by those unafraid to carry out His direction to “Cry aloud, spare not, lift up thy voice like a trumpet, and shew my people their transgression, and the house of Jacob their sins” (Isaiah 58:1).

Will those nations—the house of Jacob, identified in our book The United States and Britain in Prophecy—heed this trumpeted warning?

“Then Amaziah the priest of Bethel sent to Jeroboam king of Israel, saying, Amos hath conspired against thee in the midst of the house of Israel: the land [or inhabitants] is not able to bear all his words” (Amos 7:10). This is a hard message to receive. The land could not bear the words of Amos!However, the primary meaning of this book is for the end time. The words are much more difficult to bear in this nuclear age than they were in the age of Amos. It will be very hard for the people today to “bear all his words.”

Bible prophecy indicates that when the situation reaches this point, with the intelligence monitoring apparatus of a government discomforted by this message collecting sufficient data to act, those responsible for publishing the true gospel of the coming Kingdom of God will be deported from their home nation!

Yet people tend to forget, or are not even cognizant of, the supreme reality that the Eternal God has authority over universal intelligence. He literally knows every hair on your head (Luke 12:7). His inventory takes note of every sparrow that drops to the ground (Matthew 10:29).

That same God has already preserved a place of safety for the protection of those who must continue broadcasting the gospel message till Christ returns (Revelation 12:6; 11:3).

The whole of Psalm 139 speaks of God’s omnipotent grasp of universal intelligence to the point that He knows our very thought and intention. That’s some great intelligence! That’s truly “total surveillance” in the utmost sense! It bespeaks intelligence gathering far superior to anything that man’s efforts can obtain by the most sophisticated means of electronic surveillance.

The reason that Jesus Christ—identified in Scripture as the Word—possesses the power to judge mankind is due to His supreme grasp of intelligence covering all humanity (Hebrews 4:12-13).

Psalm 2:1-2 speak of man’s efforts to pool his intelligence to resist the Second Coming of Jesus Christ to rule the world.

What is the Creator’s response?

“He that sits in the heavens shall laugh: the Lord shall have them in derision” (verse 4).

The result of man’s acts of rebellion against his Maker in the last hour of human civilization—currently in its death throes—are summarized in verse 9: “Thou shalt break them with a rod of iron; thou shalt dash them in pieces like a potter’s vessel.”

Then, in verses 10 through 12, comes the wonderful guarantee of eternal hope that is reserved for the repentant, those who turn to obey God, terminating with the great promise, “Blessed are they that put their trust in him.”