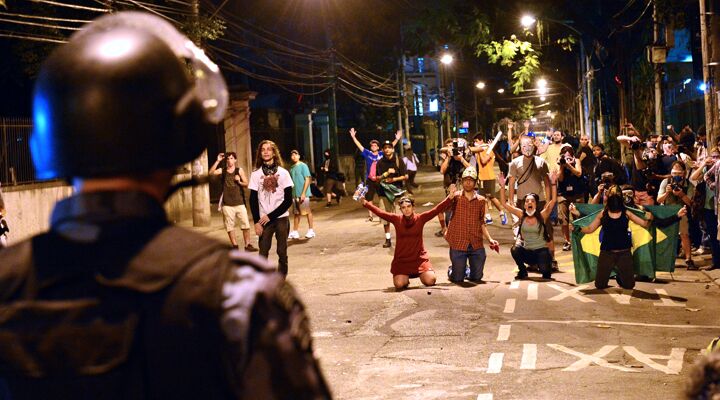 What possible connection could there be between recent riots in Brazil, the Vatican’s World Youth Day and Pope Francis?

Last month images of massive riots in Brazil exploded onto the world’s television screens. The situation demonstrated how a single message sent to receivers via cell phone could end in turning the world’s attention to one single, momentary hot spot on the planet.

As one observer commented, “Something changed in Brazil and we’re still trying to figure out what really happened. Suddenly everybody is out on the streets protesting against problems that are so old they are considered part of the Brazilian culture by now. [O]ne aspect really stands out and that is how big of a role online social networks played in the planning and organization of all these movements” (Collaborative Consumption, July 4).

From one small group of people creating a Facebook group sharing information—according to media reports—on a hike in bus fares in just one city, Porto Alegre, the capital of Rio Grande do Sul, a state in Brazil’s deep south, campaigners were able to assemble around 10,000 at a rally.

From there the indignation spread like a rash, nationally, to embrace rallies against a government apparently immune to the disparity between rich and poor that is so endemic to the Brazilian economy. As so often happens when Latin blood is stirred, the rallies soon turned into riots.

The upshot according to one opinion is that “We are seeing a major shift in Brazil, and even though the outcome of this is still a little unpredictable, one thing is for sure: The country will never be the same again” (ibid).

Brazil is the world’s sixth-largest economy. It has of recent years been a leader in what has become known as the brics group of emerging nations. The brics group comprises Brazil, Russia, India, China and South Africa.

The June riots in South America’s largest country are symptomatic of the strains placed on populations in those emerging powers that exhibit an acceleration of wealth in their growth phase, and governments either ill equipped or unwilling to deal with the problem.

It is normal for the wealth generated in such a situation to become centered in too few hands, with the population at large lagging behind in wealth distribution.

This simply engenders growing frustration within the population at large.

What has aggravated the situation in Brazil is the appearance of gleaming new stadiums to host next year’s World Cup soccer tournament, while much of Brazil’s infrastructure rots in decay.

The June riots came at an interesting time in Brazil. They occurred during the World Cup elimination football games, giving maximum media focus to Brazil, only weeks before Congress voted on amendment pec 37 to the nation’s constitution of 1988, and just one month prior to the first Latin pope’s visit to Brazil to celebrate World Youth Day.

Is there some connection between these events and the seemingly spontaneous riots in Brazil?

Far from an increase in bus fares stimulating the riots, it seems that the point the mass media missed was that they were generally in reaction to public indignation at the prospect of Brazil’s Congress passing an amendment to the nation’s constitution that would allow corruption in government to become endemic.

The amendment pec 37 was already approved in committee and was up for vote when the June riots broke out. In reaction to the riots, the vote in Congress on the amendment was postponed, a sign that the government feared things would get out of control on the streets should it pass.

As it happened, in response to the public clamor against the amendment, Congress ran scared, and when it came to the delayed vote the amendment was rejected overwhelmingly by 430 votes against, to only 9 in favor.

The public had made their point, resulting in a mass back-down by Congress.

As further balm on the greatly disturbed public mood in Brazil, federal deputies voted for royalties from petrol to now be redirected to education (75 percent) and public health (25 percent).

To these events our Trumpet observer in Sao Paulo reacted, “The public’s opinion of the government plummeted to a never-before-seen low …. The Brazilian government is scared. These public protests really showed the politicians that things could come to a total breakdown.”

In response to the biggest protests in Brazil in nearly a generation, President Dilma Rousseff called a meeting with governors and mayors announcing five pacts ranging from political reform to better public health (Financial Times, June 25).

As the FT opined, “The crux of the matter is that ultimately, it is not in the president’s political interests to be seen taking radical steps at this stage. That would be akin to admitting she is the problem. That is why she has sought to include Congress and the governors and mayors in a national dialogue” (ibid).

That approach is a far cry from the 21years of military dictatorship that Brazilians endured beginning in 1964. Yet those with longer memories would have hearkened back to those days when images of police brutality stemming from the recent June riots hit their television screens.

President Rousseff, herself a victim of torture by the military dictatorship, would be very mindful of the harm that such images can do to her and her nation’s image as Brazil prepares to host World Youth Day this month, the World Cup in 2014 and the Olympic Games in 2016.

July presents her with an excellent opportunity to demonstrate that her government is coming to grips with its challenges and working to create a semblance of unity between government and the public.

Of all institutions in Brazil, it is the church alone that has the capacity to cut across all party lines, all social structures, and link Brazil’s population together as a singular national entity.

Contrasting the World Cup with World Youth Day, Alessandro Garcia commented on the World Youth Day website, “The greatest soccer player of all time was born here, and we are the country that has been crowned world champion the most times. Our players are spread throughout practically all countries of the world. In addition, there are very few things that move a Brazilian’s passions more than their soccer team’s performance. After all, there is a reason Brazil is called ‘the country of the cleats’” (March 15).

But there is an even more powerful force that has a uniting power even more superior than Brazilians’ beloved game of soccer, for its force is of a spiritual nature and it goes to the very founding of Brazil as a nation. Garcia commented, “World Youth Day, on the other hand, gathers young Catholics from all over the world …. Catholicism, by definition, is a universal religion meant for all peoples and cultures. We Brazilians have the joy of saying that the Catholicism is at the heart of our identity. … The first name given to the land that would become our country was ‘Terra de Santa Cruz’ (Land of the Holy Cross)” (emphasis added throughout).

But Garcia then strikes the nail right on the head when he states that the improvements to infrastructure that are planned to enable effective hosting of the World Cup cannot be compared to the more “profound way” that the Vatican’s World Youth Day brings benefits to the people. He concluded, “If the World Cup gives us the message ‘fix up public transportation and athletic infrastructure,’ then World Youth Day gives us the following message: Convert your hearts! WYD Rio2013 is a great moment for us Brazilians to have a look at our faith, which lies at the heart of our culture, and to take hold of our identity.”

In its present mood, Brazil is ripe for a revival of its Catholic faith. What adds to this prospect is that the incumbent on the papal throne is a Latin. Pope Francis can expect an especially exuberant welcome to his first return visit to his continent of origin when the papal plane lands in Rio on Monday, July 22.

It is Francis’s religion that is the singularly universal spiritual force extant in Latin American society. The Roman Catholic religion has deep roots in Brazil dating back to the time of its colonization by the Portuguese in the 16th century. In Hispanic colonial times the Vatican imposed its religion on the whole continent of South America, the isthmus of Central America and Mexico. Its staying power is proven by its 500-year spiritual dominance of that continent.

As we have long declared, Bible prophecy indicates that the Roman Catholic religion is the only force that will bind the final collective of 10 regional kingships in Europe together as an imperial force in the very near future in its form as the seventh and final resurrection of the Holy Roman Empire (Revelation 13, 17).

We have long predicted that Latin America, given the bonds of two common European languages (Spanish in the main and Portuguese in Brazil) and most particularly the spiritual influence of the Catholic religion, will be attached to that empire. The empire needs the raw materials and custom of Latin America to drive its economy forward in addition to giving it access to North America’s back door to aid in fulfilling its future prophesied takeover of that region.

Realizing the imminence of these near future events, our observer in Brazil notes that the socialist government in Brazil by its diplomatic inaction already “signaled to the pope that it is not interested in him; President Rousseff had to be invited personally to come over to Italy after his election,” rather than initiating a visit herself on behalf of the Brazilian government.

The Vatican has a way of subtly dealing with governments that do not promote the Roman religious heritage of traditionally Catholic countries. Pope Francis will play to a Brazilian crowd that is presently looking for “human rights” relief, at a time when the nation’s government has been placed on the back foot by mass protests from its constituents. The nation is ready for the overlaying of an ideology in its public institutions, an ideology acceptable to all as it seeks transition from a decade of neglect of not only its infrastructure but of closing the gap between rich and poor.

Francis has billed himself as a humanitarian pope, one to whom the poor can turn for succor.

Watch for mass crowd reaction supporting this pope during World Youth Day celebrations to the point of forcing Brazil’s government to really sit up and take notice.

At a time when President Rousseff is desperately in need of a strong ally to shore up her office, she could hardly do better than begin to cultivate a better relationship with Pope Francis.