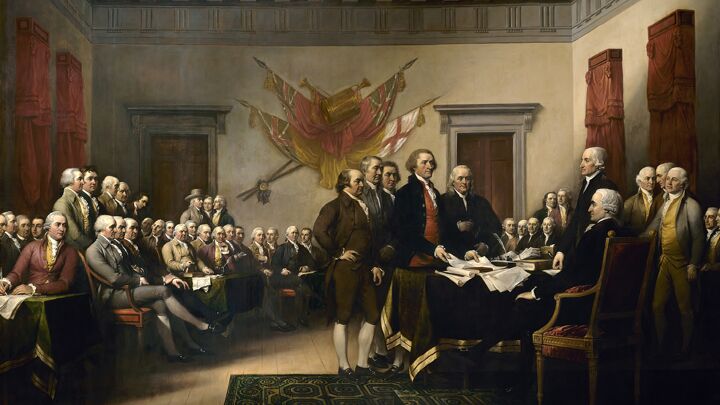 When America’s government rejects its God, it rejects the core principle of its founding Constitution.

I am not an American.

I live in America by the grace of God, for it’s where my job has taken me.

I love the country, its tremendous variety of geographic features, its abundance of blessings, and the freedoms it offers to worship my God and be part of an effort to publicize His original message to mankind in a manner unmatched and unwanted in most countries of the world.

But something has gone wrong with America—gone terribly wrong!

I saw a clip on YouTube this week titled “Americans Don’t Know WHY We Celebrate the 4th of July or WHAT COUNTRY We Declared Independence From!”

It’s a demonstration of what happens to a nation when rank consumerism and the pursuit of hedonism replaces the retention of, and pride in, national heritage in the mind of the public.

But there’s something that is even more worrying in America than the gross ignorance of its present generations on the basic facts surrounding its creation as a nation.

America has forgotten the God that gave the nation its blessed location, its freedoms and the natural benefits which they have endowed on its people.

As Abraham Lincoln mused on a seemingly ingrained habit of human nature when he proclaimed a day of thanksgiving for the nation for the blessings with which God had endowed it, “we are prone to forget the source from which they come.”

The very founding document that is the touchstone of America’s nationhood acknowledges the Eternal God in its opening and closing paragraphs, and twice in the body of that document.

The actual words and phrases employed in these instances are: “Nature’s God,” “Creator,” “Supreme Judge of the world” and “Divine Providence.”

Go back to the Mayflower Compact of Nov. 11, 1620. The original document that underwrote the establishment of “the first colony in the northern parts of Virginia” commenced with the phrase, “In the name of God, Amen.” Its principal thesis was of an initiative undertaken “for the glory of God,” covenanting “in the presence of God” to establish a government by the rule of law.

Patrick Henry’s liberty speech of March 23, 1775, which spurred those assembled to support the Revolutionary War, sought to bestir the members of the governing House to seek the truth “and fulfill the great responsibility which we hold to God and our country,” declaring his loyalty toward “the Majesty of heaven, which I revere above all earthly kings.”

George Washington, first president of the United States, declared in his inaugural speech that “it would be peculiarly improper to omit in this first official act, my fervent supplications to that Almighty Being who rules the universe … that His benediction may consecrate to the liberties and happiness of the people of the United States …. No people can be bound to acknowledge and adore the Invisible Hand, which conducts the affairs of men, more than those of the United States.”

In the closing words of that first Inaugural Address, Washington appealed to “the benign Parent of the human race … so His divine blessing may be equally conspicuous in the enlarged views, the temperate consultations, and the wise measures on which the success of this government must depend.”

Thus, whichever way you slice the cake, this nation of America was founded upon a vision that it was God’s will, and that the nation should act to please Him.

How far America has wandered from that path in recent times!

Indeed, with its judiciary and too many in its legislative bodies now not only flouting—via the decisions they are imposing on the nation—but deliberately flying in the face of God’s immutable laws governing humankind, it would seem that the agenda of the radicals to trash the nation’s Constitution is well advanced.

Yet it was George Washington who possessed the vision to declare in that inaugural speech “the propitious smiles of heaven can never be expected on a nation that disregards the eternal rules of order and right, which heaven itself has ordained.”

To declare, as God’s very Word does, that He will curse a nation which He once so richly endowed with blessings when they throw those blessings back in His face and deny Him as their benefactor, tends today to make one a laughing stock. It will get you quickly labeled as a kook, and the enterprise you represent a crazy sect. So what? That’s exactly how the world viewed Jesus Christ and His Church long ago.

Go ahead and laugh if you will, but the increasing evidence of catastrophe in America is in reality but a powerful testimony to that great truth.

Check the records of the insurance industry today, check the weather records, check the number, size and extent of catastrophe that is increasingly impacting the United States of America, and you are left with a singularly undeniable fact. The incidence of such phenomena is not only increasing, but the level of catastrophe and the cost to the nation is breaking all records!

It’s a simple matter of cause and effect. Submit to the law of God and He will bless you. Break the law consistently without repentance and it will break you (Deuteronomy 30:19-20).

I do not gloat at America’s slide into moral corruption and pending economic catastrophe. It pains me to have to watch, daily, the dramatic acceleration of the radicals’ agenda, intent as they are in destroying the foundation of this once great nation.

I weep for the nation. I weep for its people, for I know the end result of the radicals’ agenda. It is writ large and clear for all to see in the very Word of God for which America’s Founding Fathers had so much respect, unlike so many in the nation’s current administration who seem to be so intent on trashing that very Word with their every act.

I cannot sing “God Bless America,” knowing that the nation is so deeply enmeshed in sin. But what I can do is pray for the day when not only Americans, but all of humankind, will hear and respond to the very message of salvation that the God they reject today will one day ensure will be delivered to them.

For the past seven decades that message has been broadcast from both within and without the once free nation of America. Millions have heard it and responded to it by requesting literature that provides a basic education in the meaning of life. Some thousands have enjoyed the life-changing experience which that message of real hope brings into their lives.

Yet the signs are that the window of time left to those who courageously continue preaching, broadcasting and publishing this message from within the United States is fast closing.

Believe it or not, the American people are once again faced with a battle against tyranny. This time it is not from an external power. It’s from the very elite that administers the nation’s government!

As the document states, The Declaration of Independence of July 4, 1776, was in reaction to “the establishment of an absolute Tyranny over these states”—reaction to a power that was “taking away our charters, abolishing our most valuable laws, and altering fundamentally the forms of our governments.”

Is that not what America is witnessing being imposed on it by those radical elites resident in Washington today?

Does that not beg the question, as alluded to in the very document upon which this nation was founded, that “A prince, whose character is thus marked by every act which may define a tyrant, is unfit to be ruler of a free people”?

Today we see moves afoot, or already enacted, by government action, executive order, or changes in our law, that break many of the fundamental principles of the Bill of Rights.

For example, we see:

In respect of America’s foreign policy we must also question the actions of a government that has demonstrated its preparedness to break Amendment xiv of the Bill of Rights, which stipulates clearly that no person shall hold governmental office at either state or federal level should they have “engaged in insurrection or rebellion against the same, or given aid or comfort to the enemies thereof.” In particular one might question the background of America’s current secretary of state in the latter respect, let alone those responsible for America’s current foreign policy.

This July 4th would be a good time to review our editor in chief’s article titled “The Radical Left and the American Constitution” from our January 2009 edition of the Trumpet magazine.

That article is a wonderful primer for Gerald Flurry’s latest booklet, America Under Attack. It will show you that the days of freedom that Americans have enjoyed, underpinned for generations by the Constitution, are rapidly being stolen away.

But, on this Fourth of July, take hope! For the establishment of a far, far better government, underpinned by a far greater—in fact an immutable—Constitution, truly founded upon God’s law, is not far ahead (Isaiah 9:6-7).

Our booklet The Wonderful World Tomorrow will give you a vision of just what a perfect government—something that man has longed for since the forced takeover of human government by a tyrannical force in the Garden of Eden—will truly be like. It is a tremendously encouraging little booklet to read in these times when the once freest nation on Earth is being so radicalized by those intent on wrecking its fundamental Constitution with godless intent.