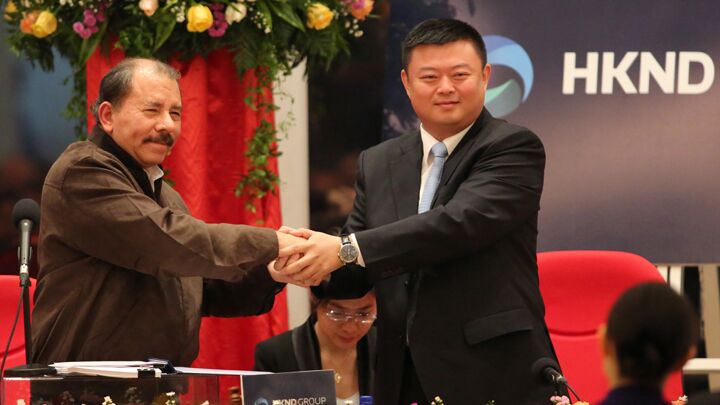 It’s either the biggest megaproject Latin America has seen in over a century, or the largest political ploy in the continent’s history.

Nicaragua signed a $40 billion deal earlier this month allowing a Chinese company to dig a canal through the Central American country that would connect the Pacific and Atlantic oceans. The news has excited many in China, but has provoked deep skepticism among engineering experts, shipping specialists, analysts, environmentalists and more.

The $40 billion question is: Will it turn out to be a giant dig or a giant ploy?

Nicaraguans have dreamed of becoming home to a transoceanic waterway for centuries. But in 1914, when the U.S. completed a 50-mile canal through Nicaragua’s skinnier neighbor to the south, that dream seemed to die. After all, how many transoceanic shipping shortcuts does one hemisphere need?

In the late 1990s, China entered the equation after America relinquished its rights to the Panama Canal. A Chinese firm called Hutchison Whampoa Limited (hwl) stepped in and signed a long-term lease with Panama allowing it to operate the canal’s entry and exit points. Within the terms of this Panama-hwl agreement lies the likely reason why China is suddenly talking about a Nicaraguan canal.

The lease stipulates that hwl has exclusive control over the entry and exit points of the Panama Canal for 25 years, and then will have an option to renew for an additional 25 years. The first term ends in about a decade.

And what is the anticipated time of completion for the Nicaraguan canal? Initial estimates said carving the 135 miles through jungles and protected lands would take 20 years. But the most recent reports revise that figure down to 11 years or even less.

Could it be that Panama is putting up some resistance to Beijing, and somehow preventing the renewal from going the way the Chinese want it to go? Some in Beijing have said Panama is still too heavily influenced by the United States. If this is China’s view, then what better way for Beijing to pressure the Panamanians than threatening to build a bigger and better canal just a few hundred miles north, potentially making Panama obsolete?

Some say the U.S.’s shale revolution and the growth of global shipping means that two canals through Central America would benefit the industry, and be a boon to both Nicaragua and China. But the questions about the deal far outweigh and outnumber any economic justifications.

The company Nicaragua signed the deal with is Hong Kong Nicaragua Canal Development Investment Co., or hknd. It was registered in the Cayman Islands just last year, has never undertaken a single infrastructure project and is led by Wang Jing, a young lawyer about whom little is known.

Shortly after the canal news was announced, Reuters sent journalists to visit hknd’s facilities in Hong Kong. “The office is large and brand new with a view of Victoria Harbor outside its floor-to-ceiling windows,” it reported, but “the office was very quiet and few people were working there” (June 20).

Contrast this obscure company with Hutchison Whampoa Limited—a Fortune 500 company operating in 54 nations with 230,000 employees. With ports in Mexico, Indonesia, Argentina, the Bahamas, Hong Kong, Ecuador, the UK, Egypt, Germany, Korea, Australia, Italy and, of course, Panama, hwl is the world’s largest port operator. It is privately owned, but over the years, evidence has amassed revealing hwl to be an ideological clone of China’s ruling Communist Party—nestled deeply in Beijing’s pocket.

hknd is doubtless under the sway of the Chinese government as well, and it may grow into something substantial. But at present the enigmatic company is not capable of this titanic Nicaraguan challenge.

The framework agreement for the Nicaraguan canal project contains another important clue. It divides the canal plan into nine subprojects including an airport, a railroad, a pipeline, and of course, the actual canal. One clause in the agreement allows hknd to walk away from any of the subprojects at its own discretion without penalty. The Chinese could build, for example, only the railroad and airport, or just the pipeline without any legal or economic consequences.

Writing for The Power and the Money, economist Noel Maurer says Clause 15.1 means there is “some evidence that hknd does not intend to build the canal across Nicaragua. At the very least, they are prepared to walk away from that commitment at the drop of a hat. … I do not think that hknd really intends to build a canal. … [T]hey might try if the financing showed up … but I don’t think that they will try very hard” (June 14).

Infrastructure experts are also skeptical about the proposal. History records attempts by French, Dutch and American financiers to dig a waterway through Nicaragua’s volcano-studded terrain. All failed.

Technology has made seismic advances since these early efforts, but experts say the 20-foot tide difference between Nicaragua’s two coasts remains a formidable obstacle. “It means a lot of water is going to come from west to east,” said J. David Rogers, professor of geological engineering at Missouri University of Science and Technology. “I’m not saying you can’t do it, but it has some major engineering challenges that have to be overcome, and if it’s your first project, I wouldn’t invest in it.”

The scant plans also neglect to map out a firm route for the proposed waterway, but it would likely be nearly three times longer than the Panama Canal, and have to slice through that same volcano-studded terrain that defeated so many entrepreneurs.

Environmentalists also caution that the waterway could devastate the nation’s water supply, including the enormous Lake Nicaragua, a vital source of drinking water for many countries in the region.

Show Me the Pesos

The project is the biggest in Nicaragua’s history. Yet, the country’s congress approved it in less than 48 hours. The lack of robust congressional deliberation, the sheer absence of public debate and the lightening speed of it all has raised many eyebrows in the political sphere. Nicaragua’s Confidencial magazine called it “the biggest scandal in recent memory.” Critics call the agreement a monumental surrender of Nicaragua’s sovereignty, saying that, under its terms, hknd (i.e. the People’s Republic of China) will basically own the nation.

Also bothersome is the question of who will fund this $40 billion project. hknd says it will finance the feasibility studies and then raise funds in international capital markets. Analysts like Evan Ellis, a national security studies professor at the U.S.’s National Defense University, think those funds will be in short supply. “Are international shipping companies going to trust a one-guy shop with minor telecommunications experience to be the system integrator on a $40 billion project in a country whose transparency is already subject to question?,” he said.

Whether the canal deal is legitimate or not, the news will have one consequence that Beijing may not expect.

Like China, geographic constraints prompt Europe to reach beyond its borders to obtain resources it needs to fuel its rise. The religion and languages shared by Europe and Latin America bind the two together as sister continents. These commonalities have long given European powers preferential economic treatment among most South and Central American nations.

But China has become the fastest-growing investor in Latin America. It has state-run companies undertaking billion-dollar projects all across the continent, and the trend is rapidly accelerating.

The blood Latin America shares with Europe remains thicker than its economic ties with China, yet Europe continues to lose influence there to Beijing’s swelling ambitions. Chinese Marxist revolutionary Mao Tse Tung vowed to his people decades ago, “All that the West has, China will have.” China’s rapacious drive into Latin America and other regions is evidence that Mao’s words still resonate clearly in the Chinese mindset.

But Europe will not sit passively by as Beijing gobbles up Latin America’s wealth. As the size of China’s Latin American footprint grows, Europe will strive to bolster its own presence there. At present, the lack of cohesion among European nations hampers this, but China’s deepening inroads into places like Nicaragua will actually act as a catalyst for EU unity.

Bible prophecy shows that, in the end, Europe-Latin America ties will trump China’s economic relationships in the region, but before that, indications are Europe and China will actually form a brief but robust economic alliance called a “mart of nations” in the Bible (Isaiah 23:1-3).

Trumpet editor in chief Gerald Flurry has explained the motivation behind such an alliance: “[C]onsidering that China has come to possess most of the world’s strategic sea gates (which, ironically, at one time were held by Britain and America), we believe there may be a brief alliance between the German-led Holy Roman Empire and certain Asian powers (Russia, China, Japan—the kings of the east).”

China may actually dig a new canal through Nicaragua, but it is most likely only threatening to do so in order to tighten its grip on the strategic Panama Canal. In either case, Beijing’s grip on the world’s vital sea gates will become even tighter, and Europe’s interest in briefly allying with China could become stronger. This portends staggeringly dark times, economically and otherwise, for the U.S. and other nations. But that darkness will not last!

Dozens of Bible prophecies explain how suffering will be vanquished, and replaced with the globe-girdling peace, happiness and prosperity that has always eluded mankind. To understand the Europe-Asia trading partnership and the awesome future just beyond it, read Isaiah’s End-Time Vision.