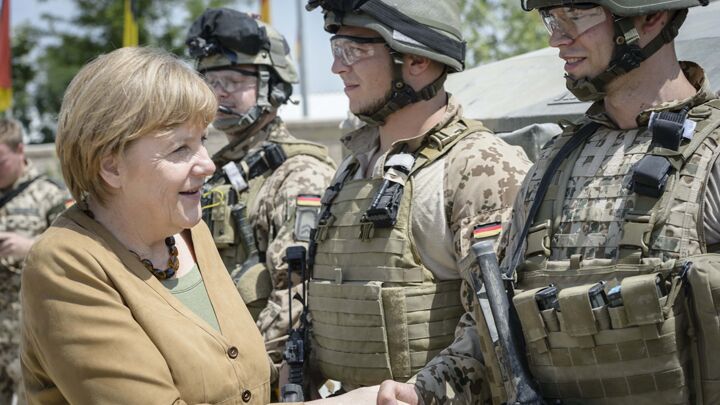 A recent meeting between the Iranian government and prominent leaders of the Taliban highlights the fight for control in the Hindu Kush, and how all eyes are distracted from the most dangerous player in the region. While nations such as Iran, Afghanistan and Pakistan fight to influence the Taliban in order to shore up their borders and counter U.S. influence, they underestimate the European presence. Bible prophecy tells us that this oversight will have a terrible cost attached, not only for the nations of the Middle East, but for the whole world.

The meeting in Iran, held from May 31 to June 2, highlights how Iran is attempting to build its relationship with a group that it has long been at odds with. The misgivings between Iran and the Taliban have been slowly healing since the U.S. invasion of Afghanistan, when Iran started supporting and training the Taliban to fight U.S. troops. Iran and Afghanistan almost went to war in 1998 when the Taliban executed 11 Iranian diplomats. Coming together to hold diplomatic discussion is something that wouldn’t have been considered in the days just before the U.S. invasion of Afghanistan in 2001. Now Iran is showing that it is open to discussion with old rivals.

To Iran, the Taliban is a tool by which it can exert influence over the region and counter the United States. By focusing so intently on the U.S., however, it is neglecting the more dangerous influence of Germany. German influence in the region is expanding, while the U.S. is becoming less of a threat. Germany understands what will happen as U.S. influence wanes. As German-Foreign-Policy.com explained (Aug. 1, 2012):

Experts are warning that a power vacuum could emerge in 2014 in Afghanistan, and that new proxy conflicts between foreign powers could occur. According to a recently published analysis by the government-financed German Institute of Global and Area Studies (giga), “apprehensions” have emerged that following a withdrawal of the majority of the Western occupation troops in about two years, the Taliban will take over control in Kabul and the country will again be plunged into chaos.

German policies and plans in the Middle East will not allow Germany’s influence in the region to be undermined. If Germany lost its power in the region, it would lose its encirclement of the oil “golden triangle.” To ensure it has quick access to the oil-rich Middle East, Germany maintains a presence in the region: Its navy is deployed in the Mediterranean, thus securing Suez, and patrols the coast of Lebanon, securing the Levant; the German military is in Sudan; its navy is off the Somali and Yemeni coastlines securing the Persian Gulf; and its military is active in Afghanistan. Germany imported 366 thousand barrels of oil per day from the Middle East in 2011. The European Union imports around 40 percent of its oil from the Middle East today.

German positioning in the Middle East helps it maintain access to Middle Eastern oil, thus offsetting its dependence on Russia, while at the same time placing German troops in positions capable of decisive military action if needed. Afghanistan is ideally situated as a base from which Germany could move against Iran. With 4,000 troops on the ground in Afghanistan now, and talks on how a military presence might remain post-2014, Germany is showing that it is unwilling to give up its position.

The only reason we can look at the Middle East and understand the real forces at play is because of Bible prophecy. Daniel 11:40 speaks of the king of the north (the German-led EU, as explained in our booklet Germany and the Holy Roman Empire) coming against the king of the south (Iranian-led radical Islam, as explained in the booklet The King of the South) like a whirlwind.

Right now, Iran is countering the U.S. and trying to exert influence over its neighbors such as Afghanistan through forces like the Taliban and other terrorist organizations across the Middle East. Iran is well versed in gaining influence through the terrorists it sponsors. But, because it is so focused on its own ambitions, it fails to see that it is already caught in the German whirlwind. Editor in chief of the Trumpet Gerald Flurry recently wrote an article titled “The Whirlwind Prophecy,” which explains just how Germany is encircling Iran. In it he writes:

Germany has surrounded Iran and radical Islam, just as God prophesied it would. Soon that whirlwind is going to start rotating and whirling against the king of the south like a well-armed—probably nuclear-armed—vortex!

Read “The Whirlwind Prophecy” and you will see the overwhelming evidence of German strategy in the Middle East and how oblivious Iran is to it. When Iran focuses its energy on countering the U.S. through building ties with the Taliban, remember that it is just a sign that it is being blinded to its own impending destruction.

Yes, there are dark times coming for the Middle East and the rest of the world as German militarism rises in the form of the Holy Roman Empire, but just as a whirlwind runs its course and then vanishes, so too will the times of destruction be brief. Ultimately, Christ will return, establishing His government, swiftly putting down the nations that have been at war for centuries. Then, His government will bring peace and joy to all: Germans, Iranians; everyone in the Middle East, Europe and the whole world.