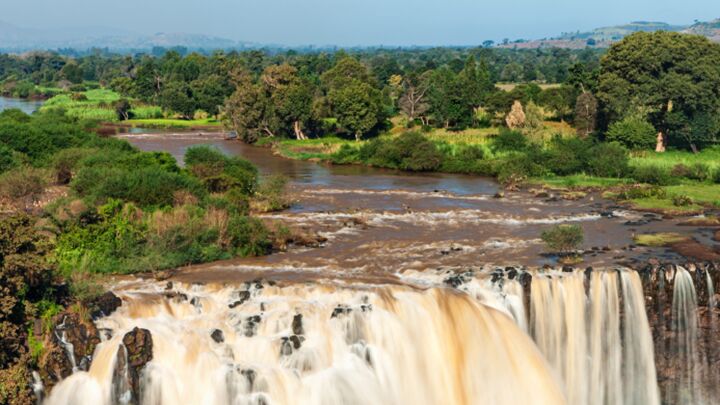 How Ethiopia’s decision to restrict the flow of the Nile River could affect its relationship with Egypt.

Ethiopia has diverted the course of the Blue Nile to allow construction to continue on the Grand Ethiopia Dam, sending new waves of concern throughout the nations that rely on the Nile for water.

The concern is that, with 85 percent of the Nile’s water originating in Ethiopia, the dam could be used as a political or military tool by the Ethiopians. When the 6,000-megawatt hydroelectric plant being built by Ethiopia is completed, it could effectively become a giant spigot, capable of severely limiting water to the Sudan and Egypt at will.

The lack of water would be a shock to Egypt, which has long enjoyed rights to the majority of the water from the Nile, with Sudan and South Sudan receiving smaller portions. The reason that Ethiopia is not allowed to access much of the water that feeds the Nile is because of a colonial-age agreement signed by Ethiopia’s Emperor Manelik ii, who agreed “not to construct or allow to be constructed, any works across the Blue Nile…” Today, however, Ethiopia argues that the colonial agreement is not only unfair, but is no longer binding, therefore allowing it to do as it pleases with the water.

Right now, the nations downstream from Ethiopia are concerned that while Ethiopia diverts the water while the dam is under construction, there will be inadequate amounts flowing downstream for the nations to the north.

The people that will feel the effects most acutely are the Egyptians. The nation has a population of over 82 million people, of which the majority live along the banks of the Nile. The regular flooding of the river has ensured Egyptian survival over the decades, under numerous empires, in an otherwise inhospitable location.

The duration of Ethiopia’s building project will be the deciding factor in regards to how much and for how long Egypt will be low on water. There are, however, greater long-term dangers that the Grand Ethiopia Dam poses.

Simply speaking, if Ethiopia dams the river, there may not be enough water for everyone. While Ethiopian officials claim the dam will benefit all the nations downstream, Egypt is crying foul, saying that the dam will divert 18 billion cubic meters of water—approximately the total amount of water Sudan and South Sudan are allowed to use under the current agreement. But that is if Ethiopia only uses the water for hydro-electricity. If the Ethiopians use the water for irrigation, estimates suggest they could cut water flow by as much as 25 percent (over 21 billion cubic meters).

The Egyptians dammed the Nile themselves with the construction of the Aswan Dam. The lake that was formed by the creation of the dam helped transform vast sections of desert into irrigated farmland. To cut off the water upstream would be to revert much of the farmland created by the Aswan Dam back to desert. No water means no farms, and this would decrease the production of staple commodities such as wheat. Egypt would soon become desperate.

The relationship between Egypt and Ethiopia couldn’t be described as close, nor is it currently seen as hostile. But cut off a nation’s water and see how long that relationship remains the same. The two countries have had a rocky past, with Egypt supporting Eritrea in its war for independence against Ethiopia, beginning in 1961. The construction of the Grand Ethiopia Dam could once again flare up tensions, this time directly between the Egypt and Ethiopia.

Whatever the construction of the dam triggers, dramatic change is coming to Ethiopia. On Aug. 22, 2012, Trumpet editor in chief Gerald Flurry said on a Key of David program that Daniel 11:43 shows that Egypt is about to have a “major impact on other nations in the Middle East, and in Libya and Ethiopia, in particular.” He went on to say that Egypt will play a critical role in turning Ethiopia into an Egypt/Iran-allied state.

If Ethiopia starts taking large amounts of water from the Nile, it will undoubtedly anger the nations to the north. Water, or the lack thereof, could prove a critical factor in bringing about dramatic change in Ethiopia—religiously, politically and possibly even militarily. For more on why the Nile will play a critical role in Ethiopian-Egyptian relations, read “War Over the Nile River.”