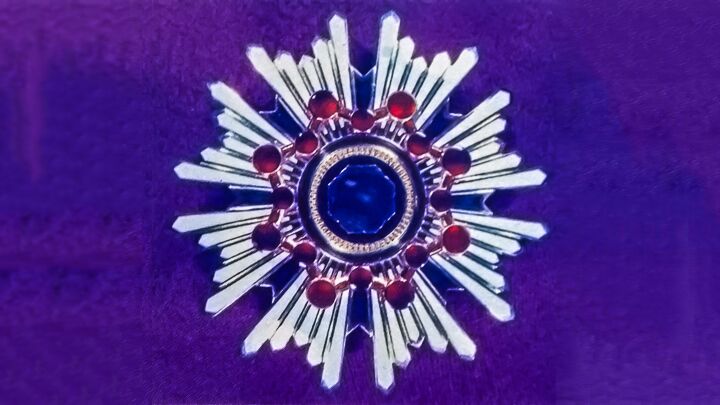 On behalf of Japanese Emperor Hirohito, the Order of the Sacred Treasure, Second Class, was conferred on Herbert W. Armstrong in a ceremony at the Foreign Office in Hong Kong. Chief of protocol, Ambassador Kenjiro Chikaraishi, made the official presentation of this high accolade the country gives to notable foreigners.

The award was established in 1888 by Emperor Meiji and takes the form of a star featuring colors of white, gold, red and blue. As with his predecessors, Mr. Armstrong’s award Patent of Decoration would have read as follows: “The Second Class of the Order of the Sacred Treasure is hereby conferred upon Mr. Herbert W. Armstrong, U.S. citizen, by His Majesty the Emperor of Japan. In witness thereof the seal of state has been affirmed to those present at the Imperial Palace.” Prior to presentation, the decoration document was signed by the prime minister and his secretariat and confirmed by their respective seals of office.

Recounting the event to Plain Truth readers in the July-August 1973 edition, Mr. Armstrong noted, “A number of prominent Japanese are on the list, announced in today’s Daily Yomiuri, to be decorated today.”

He went on to explain that seven specific classes of the Order of the Sacred Treasure exist. The First Class is awarded only to citizens. That year, it was given to a former minister of health and welfare, as well as a former director general of the Economic Planning Agency. The Second Class encompassed prior university presidents. “My decoration was in this class, the highest ever given private aliens,” he related to subscribers of the international magazine. That year, the Third Class was awarded to a member of the Olympic Committee, an official of the Imperial Household Agency and a school president. Then the honored recipients expanded to many more individuals, with the Fourth Class conferred on 482 people; Fifth Class, 1,212; Sixth Class, 935; and Seventh Class, 445.

Leaving the Foreign Office building, we were driven to the official residence of the prime minister. There, we paid our respects briefly to Mr. Nikaido, secretary general of the cabinet. I received his congratulations on the decoration. He arranged for a brief meeting with Prime Minister Tanaka, to pay our respects. This was the third time I have seen Mr. Tanaka, once was before he became prime minister and twice since.He remembered our first meeting in a conference room in the Diet building (Japan’s Capitol building), when he insisted jokingly that I sit in the prime minister’s chair. We had a good laugh over the incident. He congratulated me warmly for the decoration. He, along with the emperor, had signed the diploma that was presented with it.The prime minister explained that the decoration conferred on me was very high and was granted to [the] Japanese only after 20 years of Diet membership plus holding a cabinet post, or equivalent. He laughingly said he had only an “Eighth Class” order, this, evidently, facetiously.

With the emperor’s imprimatur, officials stated the commendation was specifically in recognition of “the outstanding contribution you have rendered to the cause of friendship and promotion of mutual understanding between the United States and Japan” (Plain Truth, December 1980). So prestigious is the award that even today, this internationally-recognized ambassador for world peace is noted as one of only 17 who have received the Second Class award.

The Japanese government’s praise for the promotion of U.S.-Japan relations underscores the very message delivered by and through the man it so revered and honored: the good news of the assured coming of Jesus Christ to usher in His government of peace (Matthew 24:14; Isaiah 9:6-7).

The message of that inheritance was declared to the leaders of all nations in the time of Herbert Armstrong’s ministry, clear across to the leaders of the East. Japan is the only nation on Earth to have felt the consuming fire of nuclear war, and no other nation in modern times has had its leadership so personally impacted by the witness of the gospel message declared to the extent that the Land of the Rising Sun did.

Are there still minds in Japan that yet remember that witness? Will some recall that white-haired patriarch who came among them preaching of the coming Kingdom of God when troubles impact their nation in their increasingly destabilized hemisphere?

Today, that same message is daily declared by our editor in chief, this publication and its associated enterprises that are supported by those who remember. Do you remember?