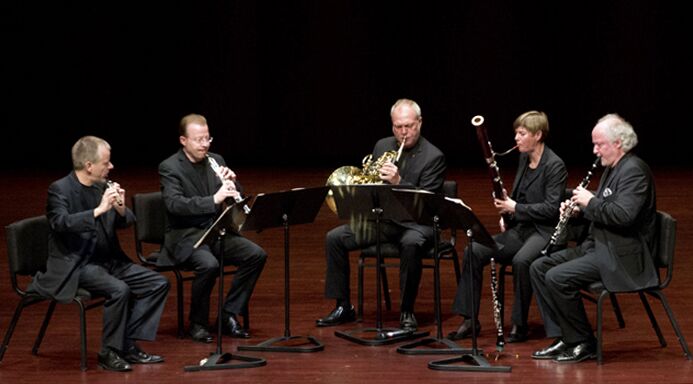 EDMOND—Along with 314 guests in the theater, a cluster of five black chairs and five black music stands waited at center stage inside the Armstrong Auditorium theater on April 29. It was the last performance of a concert season celebrating the best of the human spirit, and the star of the show was the Berlin Philharmonic Wind Quintet.

As they anticipated the flute of Michael Hasel, the oboe of Andreas Wittmann, the clarinet of Walter Seyfarth, the horn of Fergus McWilliam and the bassoon of Marion Reinhard, concertgoers took in their surrounds: American cherry paneling, plush seating, royal-themed colors. The environment materialized the same principle the performers were about to express: quality.

More than 5,000 miles from their home at the Berliner Philharmonie, the members of the Quintet brought with them more than just a set of fine instruments. They also carried a noble musical pedigree and the name of one of the world’s premiere cities of culture. The 131-year-old philharmonic is considered one of the top three in Europe, reaching a high level of prestige under its late legendary conductor, Herbert von Karajan.

The Wind Quintet itself was permanently established in 1988; its four original members have played not only with Karajan but also Abbado, Rattle, Bernstein, Kleiber, Barbirolli, Wand, Giulini, Haitink, Muti, Boulez, Levine, Barenboim and other great conductors. The group has appeared across Europe and in the Americas, Israel, Australia and the Far East.

For its part, the Wind Quintet is known for its range of expression, its tonal spectrum and its conceptual unity, along with a repertoire that includes works for sextets and septets. In a word, its quality—as the Oklahomans were about to find out firsthand.

Then it was time. McWilliam introduced the first set, two works from the last year of Wolfgang Amadeus Mozart’s life: Fantasie in F Minor, K. 594, and Andante in F Major, K. 616, both of which he originally composed for the mechanical clockwork organ. Unless you were familiar with the word orgelwerk in the program, however, you would never know it, as the wind players made Michael Hasel’s arrangement quite their own, filling the wood-paneled space with a spectrum of fluttering, shining, piping, trilling and even puttering notes. Somehow, there seemed to be several more distinct sounds tickling the ear than there were instruments on stage.

The gold and silver of brass and woodwinds glinting against their matte black attire, the Philharmonisches Bläserquintett Berlin members then entered the microcosm of Jean Francaix’s 1948 work, the unprepossessingly enumerated Quintet No. 1.

As they began pouring out the andante tranquillo sounds, it felt as though the instrumentalists were watching not sheet music but a pleasant city scene, expressing a Berlin milieu perhaps: the bustle of a grand rail station. Flute, oboe and clarinet cheerily painted a stop-and-go time lapse of movement and activity, while bassoon chugged out the ebb and flow, then nimbly skipped allegro assai into higher registers to join the other traffic. Below, the playful, almost comical and sometimes electronically precise and shrill horn rolled through, the whole situation culminating in a collective, clamorous locomotive steam whistle (or what have you) blasting out its arrival and the conclusion to the movement.

“I was particularly impressed by the bassoonist,” said Christopher Eames, a junior at Herbert W. Armstrong College who plays oboe and saxophone. “The typical idea of a bassoon is to play long, slow, low notes, but the bassoonist really surprised me with her ability to play very fast, high notes, as the music called for it—and all without compromising the rich tone of the instrument.”

The musicians resumed the soundtrack for the imagination in the second movement, ambling, running, striding, walking, turning, dipping, diving and moving through and gradually out of the original scene. The third movement evoked a contemplative refuge, away from—but not completely out of earshot of—the hubbub nearby. The theme and its variations conveyed a sense of exploration, not so much an aimless wandering, but a curious search, running into unexpected finds denoted by sound effect-like punctuations. In the fourth movement, the pulse accelerated—the city explorer had come quite near the Hauptbahnhof once again—the flute, oboe, clarinet and bassoon fluttering with activity as if we had never left, the bombastic, eccentric, yet aristocratic and noble horn again interrupting the flow, then melting into it, then the “train” blasting its whistle goodbye—the finale to the piece and to the first half.

“Welcome back to the second half,” McWilliam intoned after intermission. “We had so much fun, we decided to return as well.” The hornist then voiced a sincere and special recognition of the number of young people in the audience, saying that they were rare because they understood the importance of music. (The members of the Quintet have taught chamber music to young people in several countries, including youngsters in Venezuela’s El Sistema.)

The Berliners flowed through Pavel Haas’s 1929 Quintet, op. 10, a simpler, more introspective piece occasionally bursting with hectic runs and even jarring discord. The well-named third movement, Ballo Eccentric, featured distinct discord among the instruments, here being ameliorated, there returning with a vengeance. The group finished the program with Josef Bohuslav Foerster’s Quintet in D Major, op. 95, lilting and floating along here and there with a constancy unlike Haas’s composition, the instruments quite comfortable with themselves and each other, at times luxuriating, as the audience, in the fullness of sound.

As the last, pure moderato e tranquillo notes lingered and dissolved in the chamber, the audience responded to the sonorous feast with enthusiastic applause and a standing ovation.

The Quintet returned to the stage for an encore, and McWilliam took a moment to thank the audience and the Armstrong International Cultural Foundation staff for bringing the group to Armstrong Auditorium. He briefly reminisced on Herbert W. Armstrong’s Ambassador Auditorium, and said he felt a strong “family connection,” in that sense. The group gave audience members their own family connection with their encore selection, “American Folk Song Suite,” challenging the youngest members of the audience to identify “Old Susanna” and as many other familiar-yet-virtuosic tunes as they could. For a precious few minutes, the best of the human spirit rode the sound waves and connected five prestigious musicians playing top-echelon instruments and representing a polished world city with a grateful audience in the heart of America—together as one human family.

Then the last sip of the 2012-2013 Armstrong International Cultural Foundation season dissipated from the palate.

Concert manager Ryan Malone tweeted that he could not imagine a more “exquisite, sublime way to end the season” than the Berlin Philharmonic Wind Quintet. The group and the experience were an embodiment of just one aspect of a musical tradition, a city and a people known for quality.

Armstrong Auditorium continues to host the best of the human spirit with young Herbert W. Armstrong College and Imperial Academy students sharing their efforts in end-of-year recitals. In October, its 2013-2014 season will again unite a blessed few with musicians from around the world, and create precious moments when we are not Germans, Americans, Hungarians, Russians or Israelis, but when we are all children of God joining together in His creative masterpiece of sound. When we are all happy and gloriously and humbly—human.