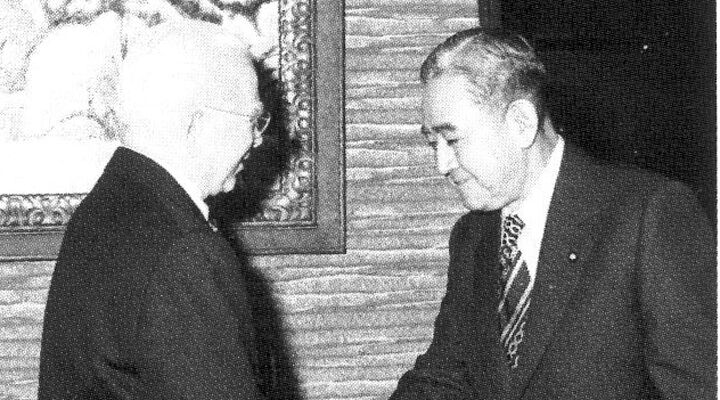 On Dec. 20, 1970, Herbert W. Armstrong touched down in Tokyo in advance of his meeting with Prime Minister Eisaku Sato. Earlier that morning, while driving through the city of Koza, an intoxicated U.S. driver had hit a local Okinawan. The spark lit the flame to the largest anti-American riot the dominion had seen since occupation. This hot topic was on the agenda during Mr. Armstrong’s 45-minute meeting with the Japanese prime minister.

Two months later, on February 25, during his State of the World address, President Nixon announced that ongoing talks were leading to the return of the island of Okinawa to Japan.

The day before the president’s message, Mr. Armstrong recalled, “I was in Okinawa, discussing the problems of reversion with Lieutenant General Lampert, as well as with the chief executive of the Okinawan people, Chobyo Yara, and other leading people” (Plain Truth, April 1971).

Accompanying him were Ambassador College general counsel and chairman of the Department of Asian Studies at Ambassador College. Mr. Armstrong went on to recount, “We were met by a reception committee, headed by Dr. Nobumoto Ohama, world-known educator and former president of Waseda University. Newsmen were present and cameras flashed. First we visited the University of the Ryukyus, and were taken to the office of President Takara. The president gave us a brief history of the university, established in 1950 on the site of the old Shuri Castle by the United States military authorities. A Michigan State University group was sent as consultants. This cooperative arrangement ended in 1968.”

“That night, a dinner was jointly hosted by Dr. Ohama and myself which was attended by some 17 of the most prominent Okinawans and their wives,” Mr. Armstrong continued in his account to Plain Truth readers. “At dinner’s end I spoke for some 20 minutes to our guests, following a brief speech by Dr. Ohama. I spoke from the heart, and pleaded for understanding and patience between our peoples. I tried to picture to them the real heart and true attitude of the American people, and how we have always been first to go to the aid of other peoples in times of distress or disasters. I felt they were visibly moved, and the general attitude was one of friendship.”

Before concluding his visit to the famed 20th-century battleground, Mr. Armstrong met for half an hour with the high commissioner, Lieutenant General Lampert, in his office. The internationally recognized ambassador for world peace outlined the global impact of Ambassador College and its various activities. Then Mr. Lampert reminded him of the impact of the Second World War on the island of Okinawa, outlining its near total destruction, 180,000 Japanese and 18,000 Americans dying in this climactic battle.

So admired by the Japanese was this man and message, that they asked for input and representation in their delegation attending the Jan. 6, 1972, bilateral talks between U.S. President Nixon and Prime Minister Sato conducted in San Clemente, California.

In addition, the same invitation and involvement took place that year in Hawaii from August 31 to September 1 for talks between the U.S. president and Prime Minister Tanaka. These high-level meetings resulted in joint statements of the two countries expressing their cooperation in spheres such as culture, security and trade.

So what was at the heart of the Okinawa dilemma? Faulty government! The annals of history document conflicts and wars between opposing government administrations. The fruit of victory of such conquest is a new government. Yet, those same pages of history reveal the inadequate human efforts to rule over and solve the insoluble problems generated by the human nature in man.

Mr. Armstrong declared in that same Plain Truth exclusive: “There are two ways of living. I repeat. One I call the get principle, the other is the give philosophy. The one is competition, greed, vanity, the desire to acquire, accumulate, the attitude of self-concern only, having a lack of concern for the good of others.”

He concluded this inspiring revelation to the mind of man by contrasting the negative problem with the positive solution: “The other is the way of having concern for the welfare of others equal to self-concern, being willing to serve, aid, help, share. The way of love is simply the way of outgoing concern for others equal to self-concern, loving your neighbor as yourself. Which way are you living? Are you, really?”