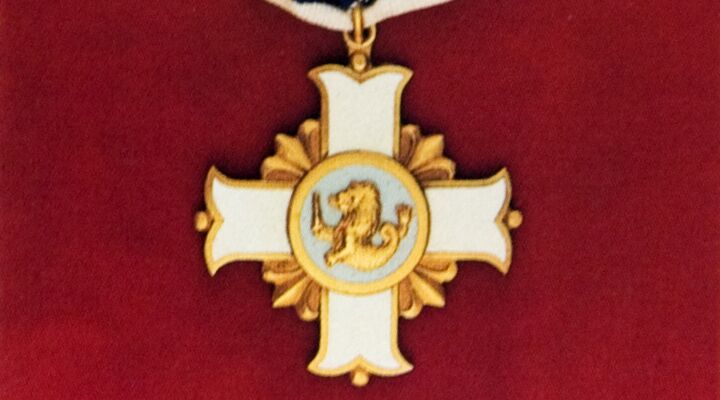 On Feb. 10, 1983, the chairman of the Ambassador International Cultural Foundation met with the Philippine president in his office at Malacañang Palace. The preceding 12 years had seen the pair hold various meetings related to global problems, humanitarianism, culture and ways in which to help the country’s citizens in pursuit of a happy, abundant and productive life.

The office and residence of the president are located in this picturesque, time-honored palace. It is located in the capital, Manila, in the historic area of San Miguel. Over the past two centuries it has undergone various renovations and updates, the most extensive and recent of which was in 1978-1979. Herbert W. Armstrong was privileged to be able to visit the palace both before and after the renovations.

Writing to co-workers in a February 17 letter, Mr. Armstrong recalled, “Also at Manila, in a special ceremony in Malacañang Palace, I was decorated by President Ferdinand Marcos with the Presidential Special Merit Medal. The president and I walked together before an audience to the front of the Grand Salon room. Flag bearers, one with the Stars and Stripes and the other with the Philippine flag, marched to the front after us. A band played ‘The Star-Spangled Banner’ followed by the Philippine national anthem.”

Mr. Armstrong was well known to Gen. Carlos Romulo, secretary for foreign affairs under President Marcos from 1968 to 1984. General Romulo was also elected president of the Fourth Session of the United Nations General Assembly and reunited with his friend, the ambassador for peace, six months before his death at the 40th anniversary celebrations of the UN, where the presidential medal recipient was honored by those assembled.

It was at this point in the medal ceremony that the acting minister of foreign affairs read the presidential proclamation conferring the decoration, stating, “Malacañang Palace, Manila. This Presidential Merit Medal is hereby conferred upon Dr. Herbert W. Armstrong.

“Citation: For his consistent articulation of the positive values that invest a truly human existence. For his comprehensive education and media network he built to disseminate these values worldwide to reach every race and religion.

“For his generous contributions to the advancement of community programs that train the underprivileged for a life of productive self-reliance. For his moral presence and compelling influence in moving people toward the creation of a just and peaceful world order. For his kinship with the Filipino spirit and his keen understanding of the country’s collective resolve to promote peace, justice and progress.

“For his being a citizen of the world and thus belonging to every country, including the Philippines, whose national life he has enhanced in many meaningful ways. Now, therefore I, Ferdinand E. Marcos, president of the Philippines, do hereby confer upon Dr. Herbert W. Armstrong, pastor general of the Worldwide Church of God, editor in chief of the Plain Truth magazine, chancellor of Ambassador College, and chairman of the Ambassador Foundation, the Presidential Merit Medal in testimony of the nation’s appreciation of his personal efforts.

“Done in the city of Manila on this [10th] day of February in the year of our Lord nineteen hundred and eighty-three, signed Ferdinand Marcos, president of the Philippines.” Mr. Armstrong was the last foreigner of only two ever to receive this prestigious decoration usually afforded outstanding Philippine citizens.

Continuing his February 17 written thoughts to co-workers, Mr. Armstrong wrote, “Then the president and I rose, facing each other while he placed the medal around my neck.” It was at this time that Mr. Marcos asked him to speak to the assembly. Mr. Armstrong said: “I would just like to say it’s been a pleasure to have helped here in the Philippines for the last, I believe, 12 years now, and for the work your president has done for his country. And for having had the opportunity to have helped somewhat in it and also toward world peace. Because I have been an ambassador without portfolio for world peace, and I hope we shall be able to have peace among all nations. I am so glad to see here the Stars and Stripes with your national flag as a symbol of peace between our nations. Thank you so much.”

After the applause of those in attendance subsided, the president proposed a toast to the Presidential Merit Medal recipient, to which he replied in kind with a toast to the president and the first lady, after which the pair led the procession out of the Grand Salon room, concluding the ceremony.

For more depth and understanding of five decades of accurate forecasting by the unofficial ambassador for world peace, based on the more sure word of prophecy, request your free copy of our collector’s item He Was Right.