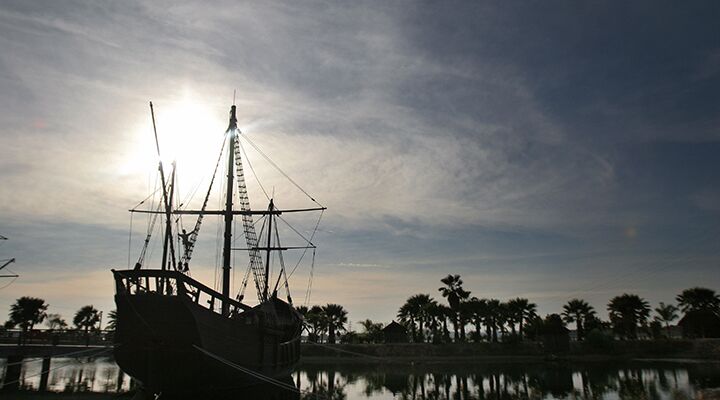 When Christopher Columbus arrived in America, the Catholic Church moved quickly to establish its control in the newly discovered territory. In 1493, just one year after Columbus’s famous voyage, Pope Alexander VI published a bull dividing the new territory between Spain and Portugal—provided the natives were converted to Catholicism. As Hernán Cortés tore through the Aztec Empire, he was following a letter of instruction that said, “The first aim of your expedition is to serve God and spread the Christian faith.”

The first missionaries arrived shortly after the fall of the Aztecs. Most of the missionary work was done by Catholic orders—the Franciscans, Dominicans, Augustinians and Jesuits. Thirty-five years after the first dozen Franciscans arrived, there were 800 missionaries in Mexico alone. Contemporary reports say the Franciscans alone baptized 5 million—roughly 1 percent of the world population at the time—although these reports are impossible to verify.

The priests built new towns and villages for their converts. They constructed huge churches, larger than many of the cathedrals in Europe. The Jesuits took this to an even higher level in South America, where hundreds of thousands lived in Jesuit-run autonomous colonies, complete with their own Jesuit armies.

Despite decrees baring their entry into the New World, hebreo cristianos (Hebrew Christians), nuevo cristianos (New Christians), Moriscos (Moors), and other “heretics” began to show up in Latin America alongside the Catholics. To deal with these non-believers, the Spanish Inquisition also made its way across the Atlantic. On the recommendation of the Inquisition, thousands of “heretics” throughout the continent were tortured until they died or confessed to charges they faced. Over a thousand people were executed in Lima, Peru, alone.

As the Inquisitors labored to purge the continent of non-Catholics, the new Spanish and Portuguese governors encouraged the spread of Catholicism among the native populations, and not just because it gave them political support from the Vatican. The Catholic Church was key to their ability to control the continent with only a small military.

One letter to the Spanish king in 1768 warned of the need for “constant vigilance to preserve suitable conduct and healthy principles of obedience and love for Your Majesty among the clergy.” Another, in 1789, stated that “the conduct of the people depends in large part on that of the clergy”; it said the best way of stopping a riot was not to call in the army, but rather “to station a friar with a holy crucifix in the nearest plaza.”

By 1767, the Portuguese, Spanish and French had grown distrustful of the power of the Jesuits. They ordered their expulsion from their lands, breaking the Jesuits’ power in Latin America. The Jesuits were escorted from the Spanish Empire, in many cases with a military escort to prevent the natives from breaking in and freeing them.

At the start of the 19th century, Spain began an effort to assert control over the Catholic Church as a whole. This was the nation’s undoing. The church caused the Latin American countries to revolt rather than have their power weakened. “The clergy provided many of the political and military leaders of the insurrection,” writes historian Paul Johnson. “Priests persuaded their entire parishes to ‘pronounce’ for the revolution. It was the clergy who drew up the first scheme for separation from Spain, in 1794, and provided most of the press propaganda. They were active politically throughout Spanish America, but in Mexico they also provided the military leadership” (A History of Christianity).

One official wrote, “the ecclesiastics were the principal authors of this rebellion … one can count by the hundreds the generals, brigadiers, colonels and other officers, all clerics, in the bands of the traitors, and there is scarcely a military action of any importance in which priests are not leading the enemy.”

“Thus Spain forfeited the New World by reforming its colonial pillar, the church,” concludes Johnson. “The attempt failed; the church emerged stronger; it retained its political and financial privileges. But it now reigned in isolation, without the support of the crown, and so in turn has tended to fall victim to the violent anti-clericalism of the 19th and 20th centuries, until, quite recently, it has resumed its revolutionary role in defense of a new orthodoxy.”