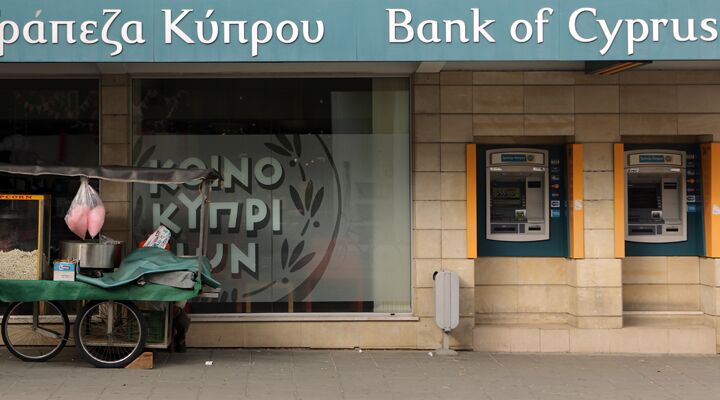 Southern Europe is stuck in a trap that forces it to give up power to Germany.

The amount Cyprus will have to pay to fix its financial sector jumped by €6 billion, Cyprus announced April 11. Originally, Cyprus was going to receive €10 billion from international lenders, and raise €7 billion itself. Now, the latter figure is €13 billion.

Cypriot President Nicos Anastasiades wrote to European Commission President José Manuel Barroso and European Council President Herman Van Rompuy pleading for more money, but he was ignored. Germany made it clear it was not willing to give any extra.

If Cyprus cannot come up with the extra cash itself, “the assent of the German Bundestag next week is out of the question,” said Christian von Stetten of the German Parliament’s finance committee.

To fund this, an estimated €8.3 billion will be taken out of bank accounts in Laiki and the Bank of Cyprus, Reuters reported April 15, citing a leaked European Commission document.

As agreed earlier, those with money in Laiki have lost everything above €100,000. Depositors in Cyprus’s largest bank, Bank of Cyprus, face an uncertain future. They will definitely lose 37.5 percent of everything over €100,000 that they’ve deposited. They will have to keep another 22.5 percent in their bank account for two or three months, just in case the government needs to take more. Depositors will receive no interest on this. And the remaining 40 percent must be kept in the bank account for six months, to stop a run on the bank. During that time, the government could decide that it needs some, or all, of this money too.

So those with deposits in the Bank of Cyprus have effectively also lost all their money above €100,000. They just have to wait to find out if they will get any of that money back.

This means a huge number will be losing their savings. Thirty-eight percent of all of Cyprus’s bank deposits were in these two banks.

This isn’t something that affects just Russian mafia bosses. It is crippling the whole island. One hundred thousand euros is not a great deal of money to retire on. Many pensioners could have savings above this amount.

It isn’t a lot of money for a business either. Entrepreneurs who worked hard their whole lives are losing everything. Companies and even charities and universities could be forced to close down. People are already losing their jobs.

The Cypriot Mail reports that orphans who lost both their parents in a plane crash in 2005 are losing their compensation money.

This affects the whole economy. Even those who weren’t directly affected could be put out of business in the aftermath, as all those newly unemployed people or those who have lost their savings stop spending.

This is the reason why the total amount Cyprus needed jumped from €17.5 billion to €23 billion. The bailout conditions were so harsh and did so much damage, that the economy now needs a larger bailout. But Europe is forcing Cyprus to come up with that extra money itself, making the bailout terms even harsher. This is a vicious cycle that can never lead to recovery. Cyprus will be left permanently dependent on Germany, forced to hand over more and more sovereignty each time it needs more money.

This same pattern is under way in both Greece and Portugal. Both their economies are now in a worse condition than when they received their bailout. Portugal needs to borrow more money to keep itself going than it did before the EU stepped in to “help.”

Yet Germany is examining even harsher bailout conditions. Its council of economic experts, knows as the “Five Wise Men,” has suggested a wealth tax to pay for future bailouts. They argue that it is easy for the rich to move their bank accounts around Europe. Wealth that is tied up in things like property is much harder to move, making taxes on it harder to avoid.

Germany feels justified in making this proposal, as a recent survey by the European Central Bank found that the average household wealth in southern Europe is much larger than in Germany.

Part of this is because Germans tend to rent their homes instead of owning them. It’s also due to inflated house prices in southern Europe, fueled by the cheap credit that used to come with being in the eurozone.

But no matter how justified the Germans may be in making this demand, it will do even more to trap southern Europe in dependence on Germany. The Telegraph’s assistant editor, Jeremy Warner, concludes that a new wealth tax would end up “trapping the periphery in even deeper depression.”

This is the result of the eurozone’s bailout: The southern half of the European continent is stuck, constantly needing more German money, and constantly giving up more power to Germany.

For more on this, see Trumpet editor in chief Gerald Flurry’s article on Cyprus in the latest print edition of the Trumpet, which will be published online shortly.