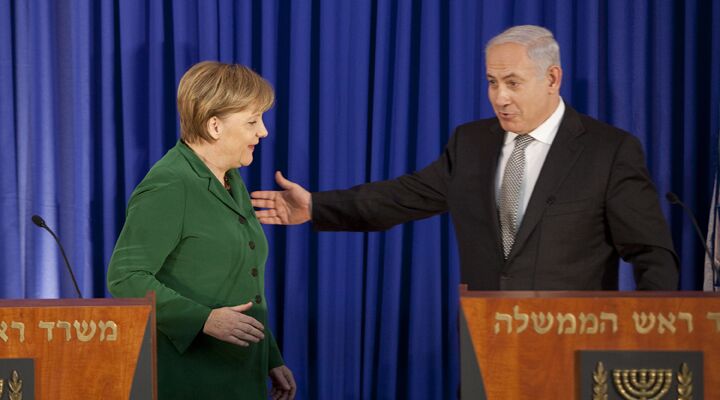 Intimate fiscal bond with a price?

Recently, the German and Israeli governments jointly made the sixth “call for proposals for joint R&D projects” from companies in their nations. All proposals must be submitted by June 17, “focusing on developing innovative products and applications in all technological and application areas.”

The modern-day bond this project reflects was foretold long ago to be fulfilled in our time today (Hosea 5:13). Germany is one of Israel’s largest trading partners and has sought to expand that trade relationship, as evidenced by increased air transport between the countries and cooperative agreements across the fields of entertainment, medicine, science, technology, biotech, agriculture, transportation, manufacturing and the military.

“On Jan. 31, 2011, Angela Merkel traveled to Israel, accompanied by eight ministers of her cabinet,” recounted The Israel Project. “The meeting with Israeli government officials was dominated by the revolts in Tunisia and Egypt in particular. Academic cooperation, cooperation in disaster control and a deepening of economic ties were also discussed. Merkel highlighted once more the close ties between both countries, while at the same time calling for progress in the peace process with the Palestinians.”

It was only last year that Israeli Prime Minister Benjamin Netanyahu was in Europe asking for the bloc’s aid to deal with the ongoing nuclear threat from Iran and incessant summer rocket attacks from Iran’s allies just across Israel’s border. He was encouraged by the German chancellor’s past and present statements regarding the country’s moral duty to protect Israel. By the end of the year both the chancellor and the EU foreign policy chief had issued statements in support of Israel’s right to protect itself from attack.

“Why go to Germany?” asks editor in chief Gerald Flurry in his compelling booklet Hosea: Reaping the Whirlwind. He explains “Already the European Union has been mentioned publicly as a protector to Israel as the U.S. grows weaker. Germany has grown more and more active in the region. It sent observers to look after the border with Egypt after Israel vacated the Gaza Strip; it sent peacekeepers to Lebanon after the Hezbollah-Israel war in the summer of 2006; for some years there has been talk of German troops helping to secure the Golan Heights should Israel give this strategic area back to Syria.

“Germany now has its navy deployed throughout the whole of the Mediterranean, one of the world’s most strategic waterways, from Gibraltar to Suez. Relations between German and Israeli politicians are the best they have been in decades.”

In 2012, the world witnessed the expansion of radical Islam, led by Iran, across the Mideast and North Africa. This resulted in the collapse of a 30-year peace period between Israel and Egypt and cast the region into tumult. With U.S. foreign policy historically insular and the country’s military withdrawal from Iraq and Afghanistan, Israel is left more vulnerable than ever. Its current economic partnership with Germany appears set to expand to a military one under the auspices of peacekeeping (Daniel 11:40).

While the Jewish people would feel secure from their regional enemies under German-EU protection, they would be shocked to read the ancient Prophet Obadiah’s declaration of a modern-day deceptive peace agreement set to impact them (Obadiah 7).

Furthermore, Bible prophecy foretells grave consequences for the American, British and Jewish peoples in Israel as a result of this perceived comfort in the arms of Europe’s economic powerhouse (Hosea 5:5). So what is the outcome of this intimate German-Israel affair? For the vital answer, read Hosea: Reaping the Whirlwind.