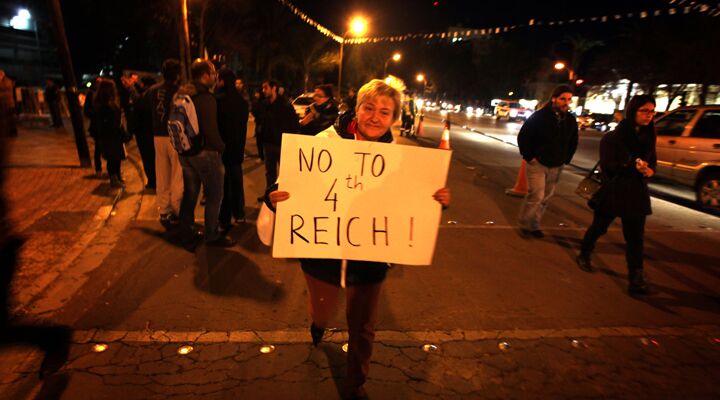 The new bailout agreement has destroyed Cyprus’s economy, leaving the nation dependent on Germany for years to come.

During the early hours of Monday morning, EU leaders agreed to another bailout for Cyprus. The island will receive the €10 billion (us$12.9 billion) it needs to avoid collapse without most Cypriots having money removed from their bank accounts. But Cyprus’s economy has been destroyed. The nation is left as a vassal state of the new German empire.

Cyprus’s second-largest bank, Laiki, also known as the Popular Bank of Cyprus, will be split up. The profitable parts of the bank will merge with the Bank of Cyprus. Those with less than €100,000 in Laiki will not lose any money. The unprofitable parts will be used to create a “bad bank,” which will gradually be put out of business. Depositors with over €100,000 in Laiki will lose a lot of money. No figures have been announced yet, but they could lose everything above €100,000.

Those with under €100,000 in Cyprus’s biggest bank—the Bank of Cyprus—will also be protected. But those with more will also lose a lot of money—perhaps 40 percent, although figures have not yet been announced.

The deal will be painful for the whole economy. Last week, German Chancellor Angela Merkel said that Cyprus “must realize its business model is dead.” The latest bailout has ensured that realization.

The Financial Times reports that the Russian businessmen who have poured so much money into Cyprus’s economy are packing up. With all the talk of Russian mafia money, some may say “good riddance,” but their exit will have a dramatic impact on the economy.

The Financial Times quotes Fedor Mikhin, who owns a Russian international shipping company. Although not directly affected by the bailout, the new instability of the financial system means he is thinking seriously about leaving. “The locals should understand: As soon as the money leaves, the people who go to restaurants, buy cars and buy property leave too. The Cypriots’ means of living will disappear,” Mikhin said.

“When the Russians leave, who is going to stay at the Four Seasons for $500 a night?” he asked. “Angela Merkel?”

Think tank Open Europe writes that “the collapse in gdp could be anywhere between 5 percent and 10 percent this year …” (March 25). The bailout has destroyed the engine of Cyprus’s economy. Its only option is to be towed along by Germany. The new deal “offers no way out of the economic ruin that the single currency has visited on the island,” wrote Jeremy Warner, assistant editor for the Telegraph.

“Under this deal, Cyprus is, in effect, kissing goodbye to one of the mainstays of its prosperity and growth—finance,” Warner wrote. “It’s a bit like saying that closing down the City of London would put the UK on a sustainable path to recovery. Many might welcome the death of finance, but the impact on output, tax revenues, employment and public services would be devastating. The same is likely to be true in miniature of Cyprus.”

As Tacitus said, “They make a desert and call it peace.” Cyprus’s economy hasn’t been fixed. It has been destroyed.

Like Greece, Cyprus seems doomed to depend on Germany for one bailout after another, making painful concessions every time. “There is a strong chance Cyprus could become a zombie economy—reliant on eurozone and central bank funding, with little hope of economic growth” (Open Europe, op. cit.).

But the most poignant analysis comes from Charles Moore, the official biographer of Margaret Thatcher and former editor of the Spectator and the Daily Telegraph. His article “Southern Europe lies prostrate before the German imperium” is worth reading in full. Germany, he argues, is now an imperialist power.

The Germans “are perfectly genuine about wishing to overcome what is euphemistically called ‘the problem of history,’” he writes. “So they are obsessed with the importance of rules, of obeying them and being seen to obey them.” He continues:

But as they have grown stronger, their love of rules has turned into an instrument of their power. We are good European citizens, the Germans argue, and we have done well. So the answer is for everyone in the eurozone to behave just like us and they will do well too. One size must fit all, and that size is made in Germany. What the Germans leave out of account is that the single currency which, for them, is artificially low in international value is, for most of the rest of the eurozone, punitively high. What helps them crushes others. After victory in 1945, Churchill broadcast that Germany “lies prostrate before us.” Today, most of southern Europe lies prostrate before Germany.

As if to deliberately underscore Mr. Moore’s point, Germany’s parliament will soon vote on the new deal. Cyprus won’t. It already voted on these kinds of measures before the weekend—before it knew what the deal would be.

Another key part of the situation: Cyprus will have to introduce strict capital controls. These controls will prevent people from taking money out of Cyprus, or perhaps even out of their bank accounts. The fact that they have to be put in place is a symptom of how badly the banking system has been hit. But it also means that Cyprus is now halfway out of the eurozone.

If someone owns a large amount of Cypriot euros, they cannot easily exchange them for Spanish euros or German euros. It means that Cypriot euros are, de facto, a different currency. “[A]t this point in time, it’s hard to argue that a euro in Cyprus is worth the same as a euro elsewhere,” wrote Open Europe.

One final angle to watch is Russia. Russian businessmen could lose thousands, if not millions of euros. Russian Prime Minister Dmitry Medvedev said the terms amounted to stealing. However, Russian President Vladimir Putin has not sounded so outraged. His spokesman has indicated that he may still make it easier for Cyprus to pay back the €2.5 billion that Russia loaned it earlier. Mr. Putin’s calm reaction indicates that Trumpet columnist Ron Fraser may be right in his suspicions that Germany and Russia have already done a deal over this.

Deal or no deal, there is no denying that Germany has just destroyed Cyprus’s economy and turned the nation into a vassal state, just as Trumpet editor in chief Gerald Flurry has forecast all along.