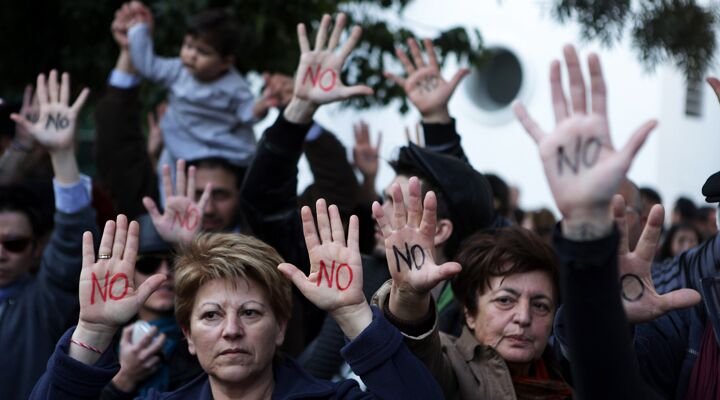 Cyprus’s harsh bailout was clearly the result of a thorough German plan.

In the early hours of Saturday morning, European Union officials decided to help themselves to the money in the bank accounts of the citizens of Cyprus. A tax of up to 10 percent on Cypriots’ savings would fund part of the nation’s bailout. This unprecedented step shocked the world.

What should shock the world even more is how Germany ambushed Cyprus and forced them to surrender to this tough bailout.

Here’s a rough outline of what went on Friday evening and Saturday morning, pieced together from reports by journalists based in Brussels:

Sometime on Friday, Cypriot President Nicos Anastasiades chatted with German Chancellor Angela Merkel on the sideline of an EU summit. The Financial Times’ Peter Spiegel says that according to Cypriot officials, Ms. Merkel reassured Anastasiades that the deal would not be too harsh. He says Mr. Anastasiades agreed to a deal that imposed a much smaller tax on savers. Those with under €100,000 (us$128,870) in the bank would be hit by a tax of 3.5 percent. Those with more than that would be taxed at 7 percent.

This conversation demonstrated that Cyprus wasn’t opposed to taking money out of its people’s bank accounts. The only objection Mr. Anastasiades raised was that he would prefer a higher tax on those with over €100,000 in order to reduce the amount that those with less in the bank had to pay.

Then Germany got tough. Later Friday evening, most EU leaders left, leaving their finance ministers to sort out the details of the bailout. With so much at stake, Mr. Anastasiades stayed behind.

Another report says that Anastasiades wasn’t even present for most of the meeting. Apparently, he wasn’t even on the same floor. The eurozone finance ministers simply worked out what they wanted and presented the Cypriot president with a fait accompli.

That evening, German Finance Minister Wolfgang Schäuble gave Mr. Anastasiades his condition for the bailout: Cyprus would have to take up to €7 billion from the bank accounts of its citizens. The Cypriot president was shocked. Ms. Merkel hadn’t mentioned anything on this scale. “The president said, ‘I can’t do that,’” one member of Cypriot delegation said, according to Spiegel. “You’re trying to destroy us. Even if I agree to it, I can’t pass it [through parliament].” Anastasiades stormed out of the meeting.

This is when the European Central Bank (ecb) stepped in. The ecb’s German board member and head of International and European Relations Jörg Asmussen approached Anastasiades with a simple message: Nice little banking system you’ve got there. It would be a shame if anything were to happen to it.

Asmussen gave the Cypriot president an ultimatum. The ecb is the only thing keeping Cyprus’s banks afloat right now. Cyprus’s central bank is entitled to borrow money at a very low rate from the ecb and then loan the money out to its banks. Asmussen said that if Cyprus did not submit to Germany’s demands, the ecb would cut off the money and the nation’s entire banking system would come crashing down. The government would face a bill of tens of billions of euros to clean up the mess—a bill it simply can’t afford. If it tried to pay it, the government would go bankrupt too.

Here are the mechanics of the threat, according to the Financial Times’ Michael Steen: The ecb’s board can stop the money if a majority votes to say that a bank is insolvent. The ecb said it would declare Cyprus’s main banks insolvent if the nation did not receive a bailout.

President Anastasiades had to make a humiliating retreat. He gave in, and Germany got its way: Cypriot savers would help fund the bailout.

Germany won. It reportedly had support from Finland, Slovakia and partial support from the Netherlands. But at the end of the day, it was a German operation.

Mr. Schäuble has tried to distance himself from the decision to tax those with less than €100,000. But his part in this is clear. His message to Cyprus was: Take about €6 billion from people’s bank accounts; I’ll leave you to sort out the details.

This was Germany’s push to take control of Cyprus’s financial system, through the bailout, without having to come up with all the cash themselves.

Remember, from the start, the euro was designed to fail in this way. A common currency without a common government is an unstable halfway point on the way to becoming a superstate. Ordinary Europeans did not want to become part of a superstate. So the EU elites set up the euro, knowing that for it to work, the EU must complete the journey. Europeans would be forced against their will into a political union.

It’s easy to sympathize with German taxpayers who are fed up with having to pay the debts of foreign countries. But this is what their leaders designed to happen. The euro was a vehicle to bring power to Germany. The irony is that the German people don’t want it.

Cyprus’s bailout could start getting messy. There is a good chance that the nation’s parliament will reject the bailout proposal. But as you watch the news, remember, the euro was a German set-up, and the Cyprus bailout was another German set-up. Cyprus is a vital island for any European nation that wants to project its power into the Middle East. Watch for Germany to gain control of it.