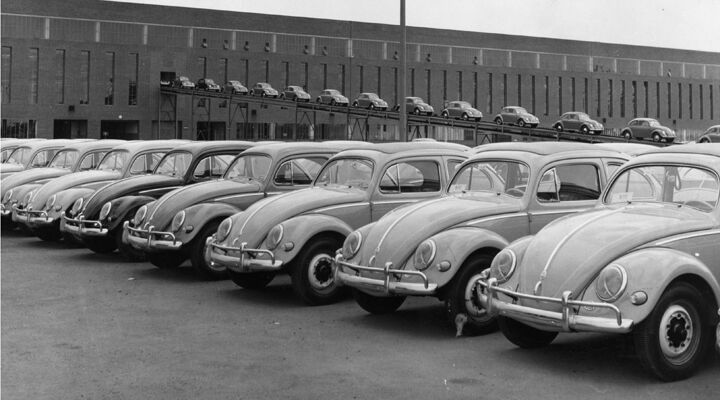 Forty-one percent earnings increase in 2012 recalls the rise and rise again of the company that created ‘the people’s car’ for the Furher.

In the summer of 1932, as he enjoyed a meal at a Munich-area eatery, Adolf Hitler drew a rough design of a vehicle he foresaw as the ride of the future. He gave his vehicle vision to Daimler-Benz, Jakob Werlin to position it for technical production. The design moved into manufacturing by automaker Volkswagen, German for “car of the people.” By 1938 Hitler’s idea had become reality and was dubbed Kraft durch Freude, “strength through joy.”

After the Nazi defeat, the company was formed into a trust and managed by West German officials. The New York Times wrote an article titled, “Volkswagen: The Darker Side Is Revisited,” which recalled “its founding as an economically dubious pet project of Hitler, its munitions production during World War ii and its wartime use of slave labor, including Hungarian Jews from Auschwitz, Dachau and Bergen-Belsen.” It concluded the report by referring to the company’s hiring of German historian Hans Mommsen for $2 million to write a book on it, placing “the Beetle firmly in the self-scrutinizing historical annals of a nation that, no matter how much it would prefer to look to the future, can never wish away its past.”

During the 1950s, plants were established in Brazil and Australia. Variant designs based on the Beetle engine resounded with consumers worldwide and became used in multiple applications. By 1955, with the momentum of the work culminated by Adolf Hitler, Ferdinand Porsche and Heinz Nordoff, the one millionth Beetle rolled out of production from the Wolfsburg plant, painted especially in gold. A massive crowd witnessed the celebrations, which featured representation from each country where the car was sold.

Volkswagen has been a corporate powerhouse in aiding Germany’s postwar resurrection from economic ashes. Citizens who had been crushed by defeat at the hands of the Allied powers now found themselves driving new vehicles and living in furnished homes thanks largely to the company’s growth. Careers at Volkswagen for multiple generations of families now became a reality.

In the 1960s, another plant was added in Mexico as international expansion reached into all corners of the globe. The vehicle become an iconic symbol embraced by the decade’s free-love movement. In 1965 alone, a million bugs were sold. In 1968, Disney released its Love Bug movie, and later the Herbie series, immortalizing the vehicle in screen glitz and glamor.

By now the company had purchased a large share of Audi and nsu, providing it more flexible body and design capabilities. By the end of 1974, Volkswagen had sold 18 million Beetles, with the Beetle surpassing Ford’s Model T as the most popular vehicle in automotive history.

The successor to the Beetle came in the form of the Golf (Rabbit in the U.S.), of which 1 million were sold in 31 months. It was on January 19, 1978, that the final German-produced Beetle rolled off the assembly line. However, from its factories in Brazil and Mexico, the Beetle continued production and sustained popularity.

From 1980, the Golf continued to sell but was replaced by the New Beetle in the 1990s, along with Jetta and Passat. During this era, Volkswagen increased its market share, brand potential and luxury potential, when it purchased Bentley, Lamborghini and Bugatti.

By 2003, the final Type 1 Beetle rolled off the Mexican plant, bringing the total sold to over 21 million. The ensuing years saw expansion in the United States and a luxury line of vehicles established. Near the end of the decade, it bought half of Porsche in a merger deal and a quarter of Suzuki. Known to most as VW, the company has worked to wash itself of its fascist past and assume the cleanliness of a corporate juggernaut.

At the close of 2012, it announced from Berlin a 41 percent net profit increase. “Full-year earnings rose to €21.7 billion (us$28.7 billion) from €15.4 billion the previous year; analysts surveyed by FactSet had expected them to come in just above €22 billion. Earnings were boosted last year in part by an accounting boost from the complex deal that made Porsche one of Volkswagen’s 12 brands” (Associated Press, February 22). Revenue increased to €192.7 billion from €159.3 billion, a 21 percent increase.

Despite recession in Europe, for the first time ever the group delivered over 9 million automobiles worldwide during the same period, a 12 percent increase spurred by sales in Asia and North America. Not surprisingly, it recommended raising the dividend on shares for its investors. Its executives project a further increase in delivered units in 2013, underscoring the company’s international power, projection and profit.

Today, at the 80-year anniversary of Adolf Hitler’s restaurant rendering of the Volkswagen Beetle, it remains not only prominent on the company website but also popular with worldwide customers.

Most people don’t know of a shocking intelligence document the Trumpet drew attention to back in 1999—intelligence report number EW-Pa 128, dated Nov. 7, 1944—which recounted the following: “After the defeat of Germany, the Nazi Party recognizes that certain of its best-known leaders will be condemned as war criminals. However, in cooperation with the industrialists it is arranging to place its less conspicuous but most important members in positions with various German factories as technical experts or members of its research and designing offices.”

The late Herbert W. Armstrong warned those with ears to hear in the very same year that IG Farben was seized by the Allies. In May 1945, to an audience of World Tomorrow listeners, during the San Francisco United Nations conference, he said: “Men plan, here, to preserve the peace of the world. What most do not know is that the Germans have their plans for winning the battle of the peace. Yes, I said battle of the peace. That’s a kind of battle we Americans don’t know. We know only one kind of war.”

Mr. Armstrong’s 1945 warning continued, “We don’t understand German thoroughness. From the very start of World War ii, they have considered the possibility of losing this second round, as they did the first—and they have carefully, methodically planned, in such eventuality, the third round—World War iii!”

As founder and editor in chief of the Trumpet, Gerald Flurry has worked to follow in the footsteps of Mr. Armstrong to warn of the final resurrection of a medieval Holy Roman Empire, whose engine is in Germany and whose master resides in Rome (Daniel 2, 8; Revelation 13, 17, 18). Request your free copy of his compelling booklet Germany and the Holy Roman Empire to understand where today’s events are leading and how tomorrow’s solutions will result.