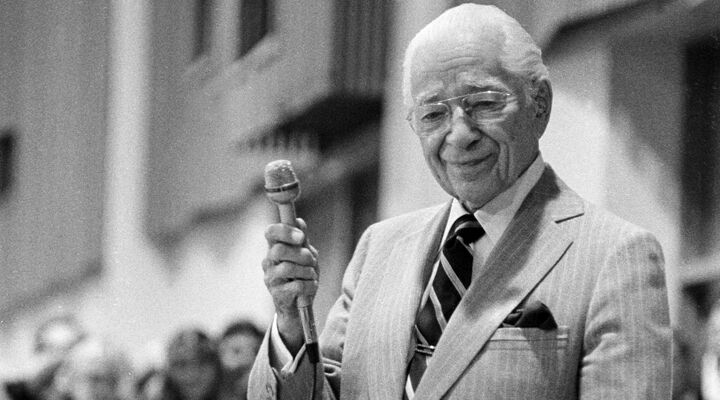 In 1968, doors opened in the Middle East for Herbert W. Armstrong to become involved with archeological programs. Relationships were developed with Dr. Benjamin Mazar, President Zalman Shazar, cabinet ministers, and individuals from Hebrew University, which enabled the work through Ambassador College to serve in support of these activities.

By March 1975, Ambassador International Cultural Foundation was established as the official humanitarian arm representing the associated activities supported by the Worldwide Church of God and Ambassador College. Mr. Armstrong was both its founder and president.

The Bulletin of Oct. 21, 1977, underscored this by reporting that the “Hebrew University professor of comparative religion accompanied Herbert W. Armstrong to several festival of Tabernacles sites and became thoroughly acquainted with our message, character and spirit.”

In 1975, a door opened for archeological participation in the Arab arena when associates of Ambassador Foundation from University of California–Los Angeles were “invited by the University of Turin and the Department of Antiquities of Iraq to replace the Germans in continuing efforts to excavate at Babylon. It took an entire year’s time to negotiate with the Iraqis and to develop a long-range “Mesopotamia Project” of value to the biblical and non-biblical scholars alike” (ibid).

In 1976, the first expeditionary team was assembled to start at summer’s end. Less than three days before the commencement of this historic project, the Iraqi government suddenly cancelled without explanation the work slated for that year.

Not to lose the value of the planning and preparation already undertaken, ucla, John Hopkins University and the Syrian Department of Antiquities began talks. A large portion of ancient Mesopotamia lay within Syrian borders, and so the team negotiated in a few days with Syrian authorities what had taken over a year to settle with the Iraqis.

The Mesopotamia Project would survive—not in the south at Babylon and Dilbat as originally planned, but rather northward in Terqa, known in modern times as Ashara. It was of great significance as it was positioned at the nexus between Shinar, or lower Mesopotamia, and middle Palestine and Syria.

Under Mr. Armstrong’s supervision, a special limited edition of about a thousand brochures were produced in English for those dignitaries who would tour the Terqa excavation site as guests of the Syrian Department of Antiquities, as well as for supporters of the Ambassador International Foundation.

The U.S. ambassador would later be drawn to the Mesopotamia Project and recognize the cultural and humanitarian bridge-building Mr. Armstrong was spearheading with the Arab world.

A decade later, seven months before his death and one month before being honored by the United Nations, globally-respected and honored friend of world leaders Herbert W. Armstrong, aboard the Gulfstream iii jet, touched down in Damascus May 6, 1985.

He was greeted at the airport by ucla Prof. Giorgio Buccellati and Dr. Marilyn Kelly-Buccellati of California State University–Los Angeles. At the time, the two were “archeologists excavating in the ancient city of Terqa in the Mesopotamia Valley on the Euphrates River on the site of Tell Mozan, possibly ancient Urkish, near the Syrian border with Turkey” (Worldwide News, May 27, 1985).

Provisions had been made for his visit by the office of the prime minister, the head of Syria’s National Museum, the cultural minister and the U.S. ambassador. “The ambassador thanked Mr. Armstrong for allowing him to be part of the Ambassador Foundation’s activities in Syria. He explained that the U.S. government gets partial credit for any successful project whether the government has any official part in it” (ibid).

The Syrian visit underscored the tenacious perpetuation of the Mesopotamia Project and propelled Mr. Armstrong to add additional material to his final and finest book, Mystery of the Ages. The ongoing excavation was still financially supported by the Ambassador International Cultural Foundation, and ucla, along with having cooperation from additional foundations and donors.

Today, Syria is in crisis, writhing amid civil war. Yet, through the tumult, its people can be comforted in the message contained in Mystery of the Ages of the way to peace, abundance, joy and well-being for mankind. They, like you, can read online or request a free copy of Mr. Armstrong’s final and finest work and find open to light of day the spiritual archeology and excavation of the laws, principles and way to individual and ultimate world peace.