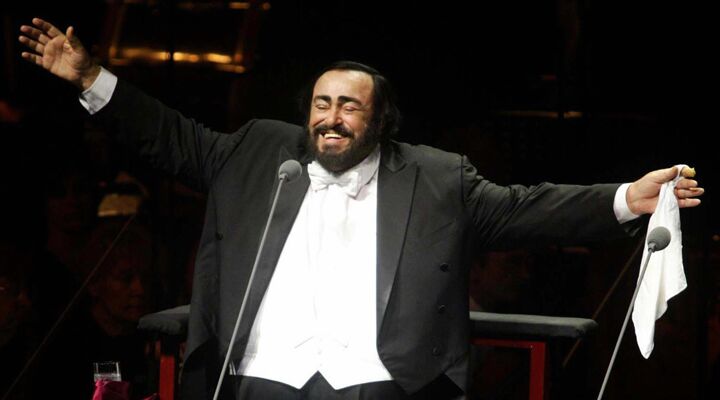 Remembering the performance, its preservation by Stanford University and perpetuation by Armstrong Auditorium

On a Wednesday evening, Sept. 24, 1975, the famed tenor made his debut performance at the newly opened Ambassador Auditorium in Pasadena, California.

Born in Modena, Italy, Luciano Pavarotti began his singing career alongside his father in the city’s chorus. “He had originally trained to become a teacher, but, after first studying with Arrigo Pola and then with Ettore Campogalliani, he won the prestigious Concorso Internazionale in 1961 and made his operative debut as Rodolfo in La Bohème at the Teatro Reggio Emilia that year” (www.lucianopavarotti.com).

This moment propelled him forward into a full-fledged occupation as opera singer and, as such, he developed to be one of the finest tenor talents the world has even seen and heard.

“Bringing his enormous talent and well-known presence to the glittering Ambassador Auditorium is like launching a ship with a magnum of champagne,” wrote Donna Perlmutter of the Los Angeles Herald-Examiner on Sept. 26, 1975. “As voice recital territory, no singer could want more. The moderate-size hall (1,250 seats) bears a bright undistorted sound, acoustics are optimal. With apparent pleasure at the results, the rotund Italian dispensed his exquisite tones, each one soaring sublimely, or cutting cleanly as through a diamond ….”

Pavarotti began his performance by singing famed arias from Pergolesi, Verdi, Scarlatti and Bononcini, later adding bel canto romances from Donizetti, Bellini and Rossini along with selections from Tosti.

“Pavarotti’s eloquent instrument was made even richer throughout its full range by the superior acoustics of Ambassador’s hall, perfect in size and design for recitals of this kind,” wrote Richard Stiles of the Pasadena Star News. “Each ringing high tone, every subtlety, each velvety low carried effortlessly to the corners, to the balcony filled with audible appreciative Pavarotti fans.”

As encores, he performed first a piece from Donizetti and then Puccini’s “Nessun Dorma,” both of which drew standing ovations from the filled auditorium.

Piano accompaniment for the tenor was provided by John Wustman, who has appeared on the world’s finest concert stages alongside renown vocalists like Carlo Bergonzi, Elisabeth Schwarzkopf, Christa Ludwig, Nicolai Gedda, Birgit Nilsson and Régine Crespin.

After the concert, which was the first of 64 to be hosted by the auditorium during the 1975-1976 season, a special reception was held in the downstairs lounge. All revenue from the concerts was donated to cultural and humanitarian organizations.

You may be surprised to know that the Ambassador Auditorium Collection has been preserved. In 2001, the Ambassador Foundation, which had by then renounced Herbert W. Armstrong’s religious, education, cultural and humanitarian legacy, gave up 600 boxes of audio, video and print materials to the Archive of Recorded Sound at Stanford University. In box number 385 is found Luciano Pavarotti and John Wustman, with reference point tapes (7816:1-2) box 440.

The notable tenor’s final performance came fittingly in his home country at the opening ceremony of the 2006 Winter Olympics in Turin, capping a spectacular career. Luciano Pavarotti died in 2007.

Perhaps in his quieter moments at home or abroad, John Wustman recalls that special Wednesday evening of Sept. 24, 1975, performing alongside Pavarotti at Ambassador Auditorium.

Today, as the successor to Ambassador, located north of Oklahoma City in Edmond, Armstrong Auditorium is the country’s newest hall for performing arts.

Should Mr. Wustman or representatives of the Luciano Pavarotti Foundation visit, they will find performing arts program founder and president of its sponsoring foundation, Gerald Flurry, has followed in Mr. Armstrong’s footsteps, having taken the time to review the exterior, interior and acoustical blueprints of Ambassador Auditorium to use that design as a model for construction of its $25 million successor.

Increasingly, performers from around the globe are gracing its stage and enjoying the peaceful environs and one-of-a-kind hospitality. This “polished jewel lifting the human spirit” is adorned with Swarovski-trimmed crystal chandeliers, Baccarat crystal candelabra, American cherry wood veneers, Spanish marble and Azerbaijani onyx. The hall’s superb internal acoustics and the soaring Swans in Flight sculpture, designed by Sir David Wynn, whose sculptured Egrets fronted Ambassador Auditorium, combine to set Armstrong Auditorium apart in a class all of its own.

Whether concert-goer, cultural buff, or admirer of humanitarianism, we encourage you to visit this performing arts jewel at the heart of the United States.