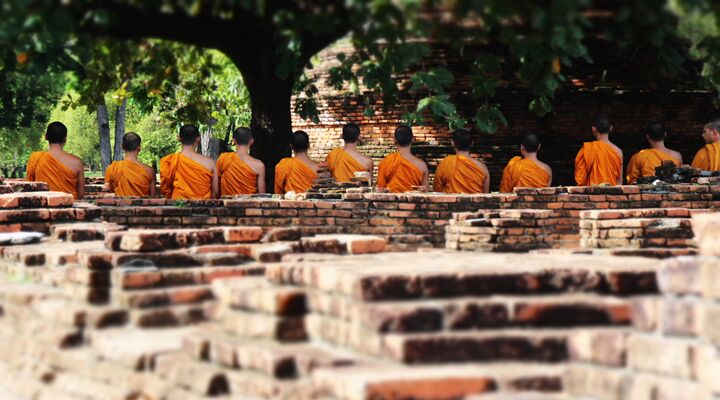 Ariyavangsagatayana said “the teachings that Mr. Armstrong spreads do good, and not harm.”

Ariyavangsagatayana, the 18th supreme patriarch of the Buddhist religion in Thailand, described the unofficial ambassador for world peace as “a spiritual leader of the Worldwide Church of God, and founder of Ambassador college,” reported the Nov. 1, 1982, Worldwide News.

Gathered in the Loma D. Armstrong Academic Center, prior to this special audience, the patriarch had met with Ambassador College students and associated Ambassador International Cultural Foundation staff involved in the acept program in his native Thailand.

This was the first historic meeting between the Thai dignitary and the beloved friend of world leaders. Usually, Mr. Armstrong met such dignitaries on their own turf. However, in this instance Ariyavangsagatayana met Mr. Armstrong in his executive office on the fourth floor of administration on the Ambassador College campus in Pasadena, California.

It’s easy to take for granted the frequency of meetings Mr. Armstrong had with world leaders and forget the regularity of language translation during these diplomatic encounters. This meeting was no exception, with Sawasdi Yingyuad, college faculty from 1972 to 1974, translating the unique interchange with subject matter dominated by the activities and welfare of King Bhumibol and international relations. Both men were well acquainted with both the king and queen.

Ariyavangsagatayana, as the 18th patriarch, represented the Thai monkshood or sangha. He was instilled in office by the king, along with consultation of leading monks. “He presides over the Sangha Supreme Council, which has both legislative and judicial functions” (Historical Dictionary of Thailand).

The patriarch presented his host with three of his own books along with a special bronze medal in honor of the participation of the college and foundation in the Thai government’s refugee enterprise.

During the visit, college students gave a guided tour of the campus to the monks accompanying the supreme religious leader. The same Worldwide News edition quoted the patriarch saying “the greatest problem that has to be solved today is the selfishness of the governments of men.”

He further noted that “Mr. Armstrong, as ambassador for peace without portfolio, has an unusually important role to play in letting the nations know that they must change if we are to have world peace.”

In the presence of Thai leaders in Southern California, he opined that “the teachings that Mr. Armstrong spreads do good, and not harm, and are therefore in keeping with the principles which the supreme patriarch himself stands.”

“In what the Thai leadership regarded as a surprising statement, the supreme patriarch told them not only to listen to what Mr. Armstrong says, but to copy what we do as an example” (ibid).

After Mr. Armstrong’s death in 1986, those who took over ignored the unified call of world leaders, seeking to discredit his reputation and dismantle his teachings.

However, the king and queen of Thailand would be encouraged at the desire and actions of Trumpet founder Gerald Flurry to follow the recommendation of their emissary who sagely advised us to not only listen to what Mr. Armstrong said, but to follow his example.

To achieve this required much labor and restoration of a legacy. A six-year court battle between this publication’s sponsor and the Worldwide Church of God, ultimately yielding a victory out of court, enabled the teachings of the man so respected by the Thai elite to be given free to all who ask. Request Raising the Ruins to understand more.

Today, that legacy so honored by world leaders lives on through the spiritual work of the Philadelphia Church of God, the educational institution of Herbert W. Armstrong College, and charitable humanitarian activities carried out by Armstrong Foundation.

One wonders at the moment the Thai supreme patriarch opened his signed copy of the gift from Mr. Armstrong and read, “It’s positively astounding! It has remained undiscovered by science! No religion has revealed it! Higher education has never taught it! Is it possible the whole world has been deceived—regarding the awesome purpose of human life—about the way to world peace and how it will come?

As part of that spiritually liberating victory, we are pleased to offer you without cost, obligation or follow up, Mr. Armstrong’s book The Incredible Human Potential.