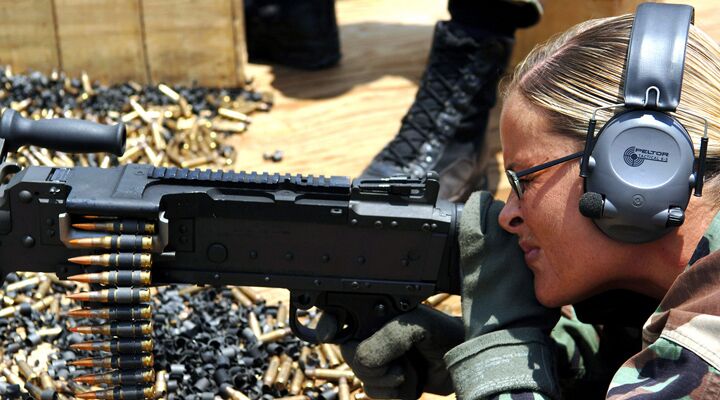 It’s official: Women are no longer ‘barred’ from the front lines.

Why are liberals so confounded eager to throw women into deadly warfare?

America’s military lifted its ban on women serving in combat positions this week. The move could open more than 230,000 jobs in front-line combat and elite commando units to women.

This is a policy change years in the works. Operating under the no-women-in-combat ban, the military has been expanding the number of “non-combat” positions for some time. That designation has served essentially one purpose: to open up more jobs to women. The line separating combat from non-combat is arbitrary and in flux: The harder the lobbying to expand opportunities for women became, the narrower the definition of “combat” got.

Now, the charade is dropped. And why? Are hoards of women soldiers demanding that combat positions be opened to them? No.

The truth is that for years, while “non-combat” jobs opened to women that were obviously more combat-related, the number of positions available far exceeded the number of women applying for and accepting them. Women don’t want those jobs. Though there exists an exceptional minority, women who enlist are generally more likely to think negatively about the harsh demands of military duty. They tend to view it as a short-term choice, a stepping stone to a better life as a civilian with a family. For example, whereas getting married tends to make a man more stable, solidifying his careerist goals in the service, it has the opposite effect on a woman. Attrition rates are consistently many times higher among women than men. And Army surveys show that 85 to 90 percent of enlisted women strongly oppose policies aimed at thrusting women into combat.

So who pushed for this policy change? It was basically an aggressive minority of lobbyists and high-placed feminist civilian leaders, along with a few hard-core careerist military women. These politically correct ideologues are driven to prove that women can do anything men can do—no matter the costs to the military, to America’s security, or to the women themselves.

These costs are exceedingly well documented—and consistently ignored, shouted down or buried. The average woman is almost 5 inches shorter, with nearly 40 fewer pounds of muscle and 6 more pounds of fat, than the average man. She has less than half of his upper-body strength, 20 percent less aerobic capacity, and lighter, brittler bones. She cannot run or jump as far; last as long; grip as well; push, pull, lift or carry as much.

The military has dealt with this by implementing separate conditioning standards for women, by lowering standards generally or eliminating some altogether. Britain’s military is watching America thrusting women into combat and saying it wants no part of it: Officers warn that lowering physical standards is ample proof that female infantry is a bad idea.

Though civilian leaders love to speak of the “new warfare” being a tidy, push-button, technology-driven business, reality has never matched that fiction. War is brutal, physical, demanding and deadly. Politicians can easily overlook that fact in the midst of relative peace. But their eagerness to plunge women into the nightmare of warfare is, in fact, disregard for women masquerading as support for women.

Some female soldiers recognize this—too late—and are not impressed. As one of them said, “Those feminists back home who say we have a right to fight are not out here sitting in the heat, carrying an m16 and a gas mask, spending 16 hours on the road every day and sleeping in fear you’re gonna get gassed.”

Women face greater danger than men in most combat situations. Physical limitations make them likelier to be injured, captured or killed. This reality also endangers the men who are forced to fight alongside them. (Elaine Donnelly says bluntly, “No one’s injured son should have to die on the streets of a future Fallujah because the only soldier near enough to carry him to safety was a 5’2”, 110-pound woman.”) And when women are captured, experience has shown that they are treated far worse—unimaginably worse—than male prisoners of war. Though feminists lobby hard against rape generally, they “bravely” insist that, since women are duty-bound to serve as combat soldiers, rape in war cannot be stopped. Jessica Lynch, a poster child for women in combat, was allegedly beaten, raped and sodomized in captivity.

Shame on those decision-makers who would purposefully subject women to such abuse—only to serve their own twisted ideology!

Consider soberly: The military agency that trains pilots in survival, evasion, resistance and escape as prisoners of war actually includes a component to desensitize male soldiers to the screams of their women cohorts.

Of course, these same men are then expected to treat women soldiers with utmost respect and dignity, in keeping with all of the sensitivity training they have had forced upon them.

In the “brutish,” non-politically correct world of yesteryear, the strong were obligated to serve the weak. A traditional-thinking male seeks to protect a woman. An honorable man shields a female from danger and hurt. This attitude, to the feminist, is contemptible. And on a gender-integrated theater of combat, it introduces a host of complications. A leader is expected to view that woman not as a woman, but simply as a soldier—a grunt whom he must be able to send into harm’s way. In the up-is-down moral climate of today’s military, his reluctance to pitch her into the lion’s den is considered backward!

America’s leaders are trying to convince us that we cannot win our wars without our wives and mothers on the front lines. They see that as a sign of the nation’s progressiveness.

At the same time, when we see Islamic extremists sending women out as suicide bombers, we rightly view that as a sign of their barbarity, and their moral and spiritual depravity.

This is a terrible experiment. The Bible prophesies—in places like Leviticus 26:14-21—that it’s going to fail cataclysmically.