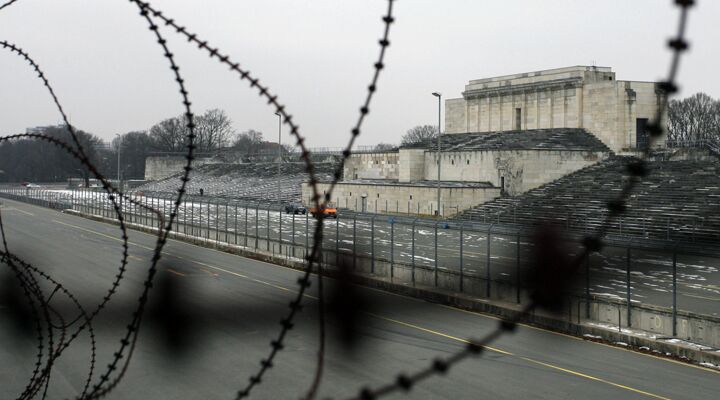 Herbert W. Armstrong arrived in Munich from Israel on Thursday, May 16 1985. Two days prior, while in Jerusalem, he made the last edits to what would be his final and finest book, Mystery of the Ages.

On May 17 while in Germany, Mr. Armstrong met with former emperor of the Holy Roman Empire and respected EU parliamentarian Otto von Habsburg, who had brought with him his youngest son, Georg, a Munich university law student at the time. The two had met previously at Ambassador College in Pasadena and also in the Belgian capital, Brussels. The majority of the 90-minute meeting was recorded by the World Tomorrow television crew and incorporated into a special program later that year.

“On the Sabbath, Mr. Armstrong spoke to over 530 brethren from all over the German-speaking area in the Cherubim Hall of Munich’s Hotel Vierjahreszeiten. He began by commenting on the Church choir’s special music ‘Let There Be Peace on Earth,’ then proceeded to give a very encouraging sermon reassuring us that we have the truth and that world peace will come soon. Mr. Armstrong also whetted everyone’s appetite by outlining for us his new book, Mystery of the Ages. The German audience was also thrilled to hear him speak a few words of German he had learned some 70 years ago” (Pastor Generals Report, July 7, 1985).

From 1927 through 1939, the nsdap, or Nazi Party, held its rallies in an 11-square-mile area of Nuremberg. After 1933, these events were titled the National Congress of the Party of the German People, whose purpose was to focus on Adolf Hitler, purportedly chosen by design from above to cleanse Europe of its Jews and establish a thousand-year Teutonic Reich. The thronged masses numbering up to 150,000 witnessed their Führer’s fiery tirades, pledged loyalty and paraded before their leader. The rallies served as powerful propaganda not only within Germany, but also via film and audio as a witness to the world of Deutschland’s mighty power.

This trip to Nuremberg in May would impact members of the Worldwide Church of God during their annual Feast of Tabernacles observance in late September. The convention was the largest and longest running conference of its type and was observed by over 100,000 people at 92 sites spanning 50 countries. During his last Feast of Tabernacles, Mr. Armstrong approved a segment of the Behind the Work film to center upon the prophesied final resurrection of the medieval Holy Roman Empire (Daniel 2, 8, 11; Isaiah 47; Revelation 13, 17-19).

The two-hour video production culminated with approximately seven of the final ten minutes devoted to video of Hitler’s famed rallies in Nuremberg. As the pictures rolled, the venerated voice of The World Tomorrow, Art Gilmore, narrated, “His Third Reich was soon to lunge out at Europe and hold it captive for five nightmare years.

“Hitler drew inspiration from ancient Rome; even his architecture was inspired by the styles of the caesars. Before this ninth fearsome horn of the empire had been crushed in the ruins of racism and the Third Reich, much of Europe had been reduced to rubble.”

As the video footage captured that May 19 in Nuremberg played, Mr. Gilmore continued, “Forty years later there is little left to remind the visitors of the ravages of war. The place where Hitler once goaded his people into frenzy is now a park where old people stroll and children play.”

“Close by, the review stand at Zeppelin field, where the legions of the Third Reich paraded before their Führer, is now in ruins,” listeners heard, while video of Mr. Armstrong visiting this site played for the thousands of viewers gathered at festival sites worldwide.

The production concluded by reminding the membership—which supported, to the tune of over $200 million per year, the mass circulation Plain Truth magazine as it peaked at over 8 million subscribers, the World Tomorrow program broadcast on over 400 stations, Ambassador College and the Ambassador International Cultural Foundation—that one final resurrection of this Holy Roman Empire, a combine of church and state, would arise to rule and thereafter be reduced to abject ruins by the returning Jesus Christ as King of kings and Lord of lords (Daniel 2:44; Revelation 17:14; 19:16).

The past 27 years of fulfilled prophecy, as declared by Mr. Armstrong beginning in January 1934, have seen the fall of the Berlin Wall resulting in the reunification of Germany, collapse of the ussr and rapid advancement of the European Union. These irrefutable prophecies of your Bible and documented facts of history enabled our editor in chief to declare on Jan. 1, 2010, that the final resurrection of this empire had begun!

As regular readers are aware, we have warned and encouraged our readers to watch for a powerhouse, domineering Germany to continue calling the shots in the euro crisis; to watch for that nation to soon weary of the bloc’s weaker nations, including anti-EU Britain; to watch for the sudden rise of a German-centric, Vatican-guided, streamlined United States of Europe to replace today’s cumbersome 27-nation EU; and to watch for that powerful European empire to have the stamp of the making and design of both Rome and Berlin etched deeply into its core. For vivid detail of this assured prophecy, request your free copy of Gerald Flurry’s compelling booklet Nahum: Prophecy for Germany.