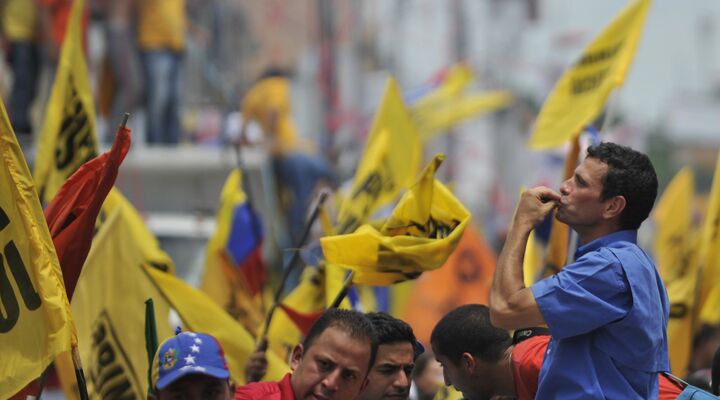 The impending death of socialist autocrat Hugo Chávez could kick off a Roman Catholic Spring that would realign Venezuela with a European-based Holy Roman Empire.

Rumors of regime change are swirling through Venezuela as strongman Hugo Chávez is once again heading to Cuba for medical treatment.

Though Chávez has repeatedly dismissed rumors that he has not been cured of his cancer, his last public appearance was a televised interview three weeks ago, and the Spanish-language newspaper ABC is claiming he is suffering bone metastasis from his pelvic cancer.

If Chávez dies within the next four years, Venezuela could undergo an extended period of instability followed by a political transition on a scale that the country has not seen since Chávez first came to power in 1999, according to the Austin-based geopolitical think tank Stratfor.

So far, Chávez has made no concrete plans for his succession. So if he dies, resigns or is permanently incapacitated within the next four years, new elections have to be called.

In the event of an unexpected snap election of this sort, a unified opposition—likely behind former presidential candidate Henrique Capriles Radonski—would stand its best chance in over a decade.

Such a change in leadership probably would not profoundly affect domestic policy in Venezuela, considering that Capriles espouses a watered-down version of Chávez-style socialism. Foreign policy, however, would experience a seismic shift under opposition leadership.

Under the anti-American Chávez, Venezuela has moved closer to nations like Russia, China, Nicaragua, Cuba and Iran. The nominally Catholic leader, who has spent much time praising the socialist ideals of atheists like Karl Marx, has also increased tensions between the Venezuelan government and the Vatican.

This foreign policy could hardly be more different from the espoused policies of opposition leader Capriles. The self-described “devout Catholic” studied at the Catholic University in Caracas, and says the first thing he will do if he ever comes to power is to pay homage to the Virgin Mary.

Such policies in Venezuela would no doubt greatly please Pope Benedict xvi and his Vatican hierarchy. The Wikileaks scandal recently exposed a conversation between an American ambassador and Vatican Archbishop Leonardo Sandri, who is widely regarded as the third-most powerful man in Rome.

In this conversation, Sandri admitted that the arch-conservative pope is deeply concerned about the general leftward shift in Latin America. He mentioned that he personally regards Chávez as a dangerous man and went on to say that the pope fears that several other Latin American leaders are looking to men like Chávez and Castro for leadership.

For the time being, Archbishop Sandri has confirmed that Rome is committed to a non-confrontational approach to the problem of Hugo Chávez. Perhaps rumors of Chávez’s declining health have convinced the pope that patience is the best policy, especially considering the pro-Vatican sentiments of Venezuela’s primary opposition party.

The impending death of Hugo Chávez could indeed allow opposition forces to rise to power in Venezuela, kicking off a sort of “Roman Catholic spring.” In fact, Bible prophecy indicates this will happen!

In the 17th and 18th chapters of the biblical book of Revelation, God labels the German-led, Vatican-influenced empire that is currently emerging in Europe as “Babylon the Great.” In the corresponding Old Testament prophecies of Isaiah 23 and Ezekiel 27, the same empire appears under the name of Tyre, the most powerful trading center of the ancient Mediterranean world.

Based on these scriptures, Herbert W. Armstrong long predicted that the alliance between Europe and South America would grow extremely strong. The most significant factors that will cement this alliance are the Roman Catholic religion and the Spanish language. This union, however, will not be a union of equals: The Latin American countries will again become vassal states to the Holy Roman Empire!

As the July 1965 Plain Truth foretold, “Flowing across the Atlantic to feed the hungry furnaces of the Ruhr and the other industrial complexes of Europe will come the rich mineral wealth of Latin America.”

More is prophesied for this European empire, however, than a mere trade alliance with Latin America. In Isaiah 10, God says Assyria (modern-day Germany) would be the rod of His anger used to punish the hypocritical nations of Israel (modern-day America, Britain and its dominions) and Judah (the Jewish state of Israel). Isaiah 23 sheds further light on this prophecy by foretelling a great economic siege that is to be set up against the United States.

With a German-led Europe (the king of the north) possessing great maritime power, North America will be surrounded on the east by Europe and the south by Latin America. The Bible contains many prophecies of that European power attacking America—and many other prophecies of America being besieged.That is where China and the giants of Asia enter the picture. When the Holy Roman Empire attacks North America, there will be no help or sympathy from Asia. In fact, considering that China has come to possess most of the world’s strategic sea gates (which, ironically, at one time were held by Britain and America), we believe there may be a brief alliance between the German-led Holy Roman Empire and certain Asian powers (Russia, China, Japan—the kings of the east). Should Europe, the resurrected Holy Roman Empire, find a way to take advantage—even for a moment—of key resources and strategic holdings of China, Russia and Japan, it would have more than enough power to besiege the Anglo-Saxon nations and enslave them.

Germany and the Vatican are building a transcontinental alliance that will ultimately include 10 European kings, a loyal network of Latin American vassal states and an anti-Iranian alliance of Arabic regimes.

With its left arm, this Vatican-dominated conglomerate will reach down southward and eastward into the Middle East to conquer the Holy City Jerusalem. Then with its right arm, this “Holy” Roman Empire will reach southward and westward across the Atlantic to take control of Latin America and besiege the United States!

Reports coming out of Turkey, Syria, Arabia, Brazil and Venezuela show that the Germany/Vatican axis is already laying the groundwork for its transcontinental empire.